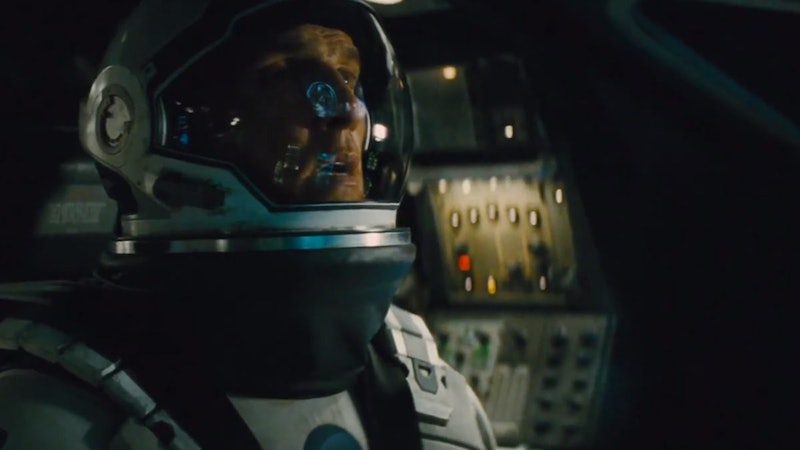 Christopher Nolan may have reinvented the superhero blockbuster (and doesn't think too highly of his competition, either). He has the market cornered on dream movies. And the whole story-told-in-reverse thing is pretty much his (sorry, Harold Pinter, but you’ve been usurped). Sixteen years of directing films has landed Nolan with some epic successes, both commercially and critically. And while I now can only anticipate the heaps that Interstellar will reel in at the box office, I’m about ready to weight on in the question of quality: this is his best film yet.

Doubtlessly, some will treat the allotment of such a superlative to any Nolan film other than The Dark Knight simple heresy. But exciting as the second Batman film may be, it is a movie that is boosted supremely by its highlight performance — that draped in the morbid appeal of real world tragedy, no less. But looking beside the theatrical bounties of Heath Ledger, we find a hero hollowed out to make room for set dressing and exposition. We find a world that, while crafted with obvious precision, lacks any of the living pulp to allow transcendence beyond the screen.

This is the key problem weighing down so many of Nolan’s movies: the lack of life force. He’s a mathematician, capable of manufacturing terrific narrative equations. But the dry metal of his work peers through in everything from blockbuster fare like Batman Begins to small, ostensibly sentimental pictures like The Prestige. His worlds beat to the sounds of a metronome, but carry no definable rhythm.

And worse, his characters flounder with the same problem. In just about every one of his films, Nolan has illustrated romantic love via widowing — the only way he knows how to depict a man’s affection for a woman is through grief. His relationships are never colored, never nuanced, and as such never able to carry over into emotional validity.

But such is not the case in Interstellar. Granted, the movie paints its ideas of love in broader strokes than a Little Rascals short would. But what Interstellar gets right that all of Nolan’s other movies do not is the personal character of an individual account of love. The dominating love story in the film is not between Matthew McConaughey and Anne Hathaway, not even between him and his unseen deceased wife. It is between our hero Coop and his daughter Murph, whose preadolescent pluck reaches levels beyond Spielbergian.

The relationship fostered between the two is hardly eschews creative precedent, but it is nonetheless its own self-identified entity. We spend enough time living within the embrace of Coop and Murph — something Nolan has never let us do before — to understand and, better yet, feel why their relationship is worth caring about at the top of a story about human annihilation and intergalactic space travel.

But the adventure material doesn’t suffer. Nolan breaks more new ground in his latest feature, that in the field of imagination. The most brazen example of Nolan’s deliberate insistence to ground all work in practical thought is Inception — a movie that takes place in a literal dream world yet can’t (or won’t) bring itself to brave any semblance of impressive visual or conceptual imagination.

As Leonardo DiCaprio and his band of thieves hop between layers of the unconscious, we are treated to city streets, hotels, and snowy mountain ranges — all rather boring landscapes, considering the possibilities. But Interstellar ups the ante just a bit, creating planets and planes of existence that betray some genuine forward thinking on the part of the Nolan boys.

And just as it tops the consistent shortcomings of his past films, Nolan’s Interstellar more than lives up to their strengths: it is exciting, it is articulate, it is neat, it is intelligent. It has the moxy of Memento (his best film up until now, I’d wager) with the knowhow of his later entries.

With Matthew McConaughey soaking in his role (Nolan’s first altogether “good guy” in just about ever) with such aplomb, we have a hero inside of whom it is remarkably easy to live, and warmly. Beside him we have a collection of supporting characters: Murph tops the lot, but fellow astronauts (played by Anne Hathaway, Wes Bentley, and David Gyasi) are serious but sufficiently creviced. And I’d be remiss if I didn’t mention the movie’s most delightful humorist, a monolithic robot named TARS.

All in all, if I’m abiding by Nolan’s fondness for equations, I’d have to compute that this one adds up to his finest work to date. No mean feat for a man who revived Batman and monopolized the unconscious.