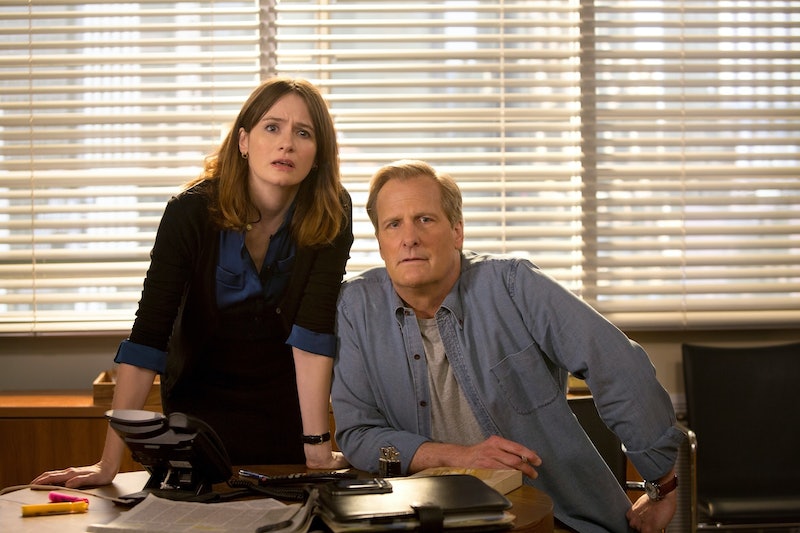 One of the many criticisms that has plagued Aaron Sorkin's HBO drama The Newsroom is that, in many cases, audiences are not ready to relive the embarrassing and/or horrific events of the past two years with swelling music and dramatic monologues. Especially considering this show's habit of using Jeff Daniel's character Will McAvoy to talk down to the audience. The Newsroom's first season aired in 2012 and took place in 2010. The show's timeline has been creeping faster and faster towards the present ever since. Sunday night's season premiere, "Boston," covered the Boston Marathon bombing from April 2013. The Boston bombing is still an ongoing federal investigation. Did the series handle this tragedy in a tasteful way? As someone who lived in Boston at the time, I have some thoughts.

In 2013, my apartment was on Beacon Street, only two miles from the Marathon's finish line. My roommate and I were hosting a party and everyone had gone inside minutes before the first explosion. There was this surreal moment that I'll never forget where screams coming from the local news on television clashed with cheers coming from outside, where the marathon was still going strong. I have been offended by The Newsroom for a variety of reasons in the past, so I was a bit wary. Watching Sorkin's take on that awful week was a weird experience, but I was pleasantly surprised.

It's no surprise that Sorkin chose this material. The media was a hot mess when the bombing occured. Nobody knew what was going on. Most of us relied on Twitter. CNN did inaccurately report an arrest in the middle of the week and retracted the story. I had to turn off the news. When Boston was on lockdown that Friday, while SWAT teams hunted Dzhokhar Tsarnaev in Watertown, I sat on my couch avoiding windows, clutching a cat, and watching The Parent Trap. I think The Newsroom did a good job of covering that confused mania while being respectful. Of course, this is a fictional show, so the characters paused before reporting anything due to the "Genoa" crisis of The Newsroom 's last season. That turned ACN into the "good guys" without much effort.

I appreciate that the episode called out the "citizen journalism" that put innocent lives in danger. While Dev Patel's character incorrectly boasted that "social media is going to solve this crime," almost every other character predicted something because Sorkin has the benefit of hindsight. For example, Will McAvoy insisted on not making the suspects into celebrities. That was an obvious nod to how Rolling Stone put Dzhokhar Tsarnaev on their cover later that year.

One last, crucial comment from one temporary Massachusetts resident to the cast and crew of The Newsroom — y'all mispronounced "Watertown." I know New Englanders can be weird. But this isn't Worcester or the Wampanoag Trail. The city of Watertown, Mass. is pronounced exactly as it is spelled, like a town made out of water. It does not rhyme with "Sam Waterston."