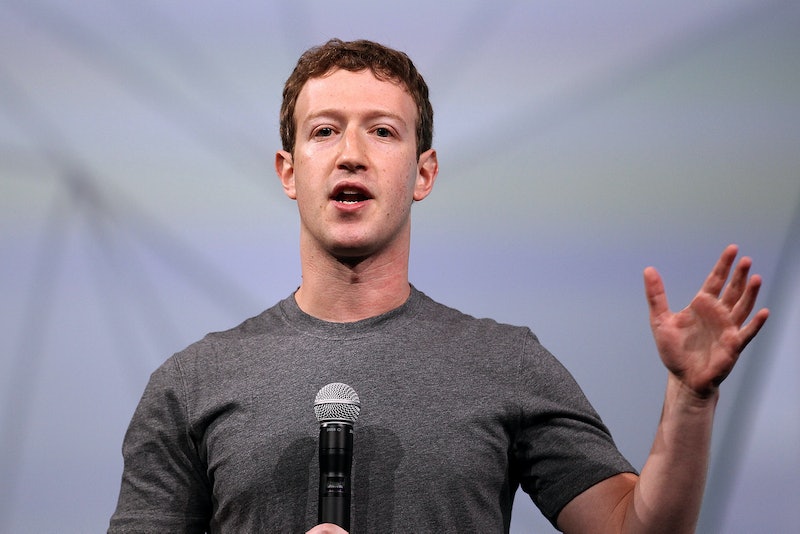 One thing that I miss most about childhood other than not having to pay bills and be a real-life adult, is wearing uniforms. From kindergarten to 12th grade, I wore pleated, plaid skirts, polo shirts in only one or two colors, black or brown shoes, and depending on the weather, knee-high socks or tights. While some might argue that it revoked me of my independence to express myself, I digressed. Wearing a uniform made getting dressed in the morning a simple equation, and for some of the most noted power players, it also makes their lives quite simple. This week, Mark Zuckerberg spoke about the frivolities that distract him from making decisions, one of them being deciding what to wear.

A few Getty images and paparazzi shots will reveal that one of the most defining characteristics of the Facebook founder is his short sleeve gray t-shirts. In #AskMark, a public Q&A hosted at the Facebook headquarters, Zuckerberg answered the question "Why do you wear the same shirt everyday." In just one minute, the answer was inevitably simple: "I feel like I'm not doing my job if I'm spending any of my energy on things that are silly or frivolous about my life." In all fairness, the comment was not a jab at fashion, or even a style talk, but is something that is readily visible among some of the most coveted celebrities who, while often devilishly stylish, stick to a code of dress that helps keep them top of mind. From Steve Jobs' turtleneck to Cara Delevingne's girl-next-door looks, check out how these power players maintain their rise to the top in these repeated, but cool, looks.

Although you can often catch Jay Z in a dapper suit and tie, most of his looks reference the street style that he's always been accustomed to. The equation is quite simple for one of hip-hop's top businessmen: a t-shirt, rugged jeans and a pair of Timberland boots keeps him in motion.

Perhaps no one captures cool, calm and collected much like Alexa Chung. The British VOGUE contributor loves a good pair of cropped pants and trainers or oxfords. Although you might catch her veering off the beaten path in floral dresses or the likes, she'll soon be right back on track with a pair of cropped denim jeans that you'll swear only exists in her closet.

Dear Uncle Karl is unwavering in his black suits, peeking white collars and sunglasses. The unabashed Chanel creative director is clearly the man in charge and like Zuckerberg, has no time for anything other than dreaming up collections matched with never-before-seen runway shows and giving his opinions on the latest pop culture celebrities.

If you catch Alexander Wang in anything other than a loose-fitting all-black ensemble, I want to be the first to know. Perhaps, his most recent collaboration with H&M didn't only capture workout style, but also the demureness in his everyday wardrobe.

Much like Zuckerberg, it could be assumed that Steve Jobs had no time for business suits and ties. His black turtleneck was a staple in not only defining him, but also the entire Apple brand: Smooth, sleek, simple and accessible. Now, that's style.

Teen heartthrob, and fashion's most coveted sweetheart, Tavi Gevinson has always sought to pick a decade of style and stick to it. But, despite her claim on nostalgia and fashionable odes to pop culture icons, one thing remains consistent in her changing outfits: her collars. Whether it be Peter Pan or a basic white one, Gevinson captures the school uniform to the tee.

There aren't many times that Lorde is not donning an opaque look. The Grammy-winning, down-to-earth songstress often keeps it simple and demure with blood-red shades of lipstick and mute tones in dresses, tops and skirts. While donning dark looks often makes you blend in, Lorde's go-to look keeps all eyes on her.

Always considered the Girl Next Door, Cara Delevingne loves a pair of skinny-legged pants. Even at the Met Gala, she opted for a sleek white jumpsuit instead of a voluminous gown, which many of the other attendees opted to wear. Sometimes, you'll even catch her in a beanie or a baseball cap turned-backwards. Off the runway, Delevingne's go-to staples keep her prepped just in case she has to show off her killer percussion skills.

Thom Browne is not here for socks and perhaps one of the many reasons I'm always on the hunt for pants above the ankle. The designer's cropped pants and no-socks uniform is not only reflected in his daily getup, but also resonates throughout his many collections. Hands in pocket, legs crossed over the other, getting ready in the morning is just that simple for Browne.