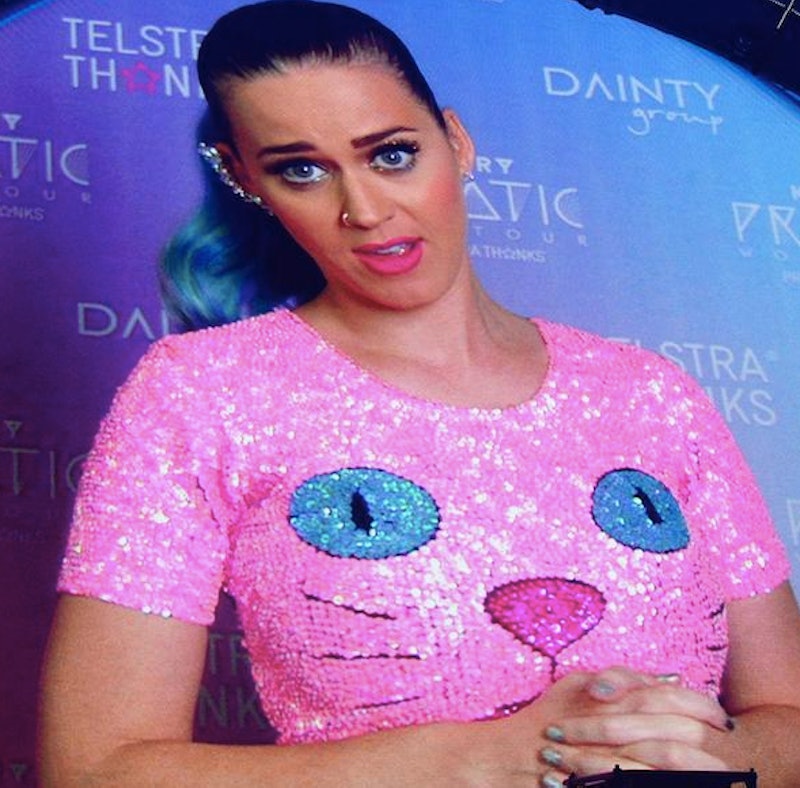 Guys. GUYS. Something amazing happened on Sunday night: Katy Perry wore a sequin cat eye crop top and matching skirt — and it's actually reasonably affordable. You can snag the exact same, dazzlingly pink shirt for $149 and the matching pencil skirt for $189 at discountuniverse.com, Don't be fooled by the URL; though it sounds like a site that would stuff your computer with malware when you're just trying to buy a cool skirt, it's actually a massively popular brand in Australia. Miley Cyrus, Iggy Azaela, and, of course, Miss Perry herself are all big fans.

Anyway, back to the shirt. Sure, it's not Taylor Swift-level of affordable, but if you're already trying to decide what to wear for New Year's Eve, I'd like to nominate this ensemble for your consideration. It's sparkly (basically a requirement for NYE dressing), it's definitely sexy, and it's just the right amount of bizarre to make you stand out in a sea of LBDs. Plus, it does come in baby blue as well, if Perry's pink feels a little too twee for your taste. Could you ask for anything more? I think not.

In case you weren't watching live, here's another look at Perry's co-ord set from when she called in to accept the "Best Look" award:

Though Perry wasn't actually at the EMAs, she certainly still made a splash at the ceremony via video chat. First, there was this sequin set, then she went on to hug a pillow of Nicki Minaj's butt in lieu of being there to accept her Best Video Award for "Dark Horse." Bow down to the queen of the Katy Cats.