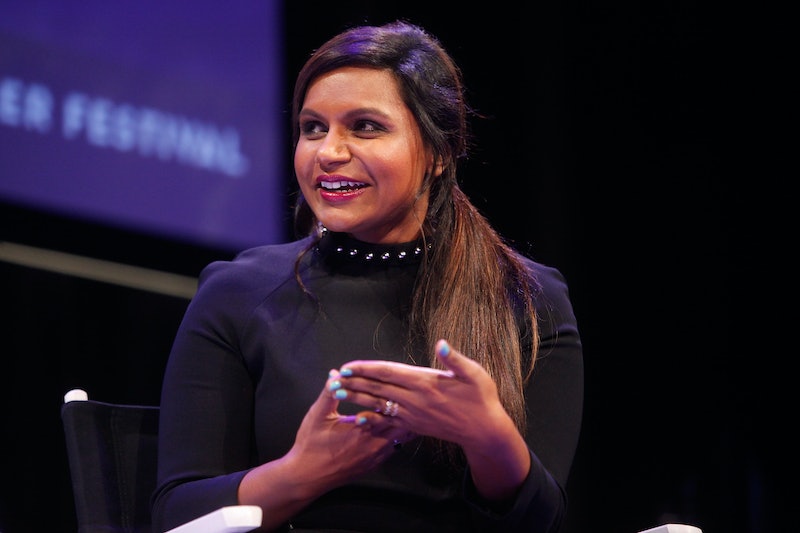 I'm a huge fan of Mindy Kaling's (in just about every way possible, from her comedy chops to her fashion sense), and I also happen to be a huge fan of The Mindy Project's costume designer, Salvador Perez... so when he designs custom outfits for her, they tend to be pretty darn awesome. Case in point: Mindy Kaling's dress for the upcoming Glamour Women Of The Year Awards.

He's designed a couple outfits for her on the show, and they're all among the best the character's ever looked — and that's saying a lot. He designed her awesome Annie Hall-esque plaid suit/pink polka-dotted shirt combo, as well as this green suit/floral shirt/leather jacket ensemble. And for Mindy (the actual person, as opposed to the character) he designed her amazingly peacock blue, bejeweled, one-shouldered Costume Designers Guild Association Awards gown.

With that little arsenal full of sartorial wins, it's pretty exciting that he's also designing her dress for Glamour Magazine's Women of the Year Awards. Kaling shared his sketch of the dress, which is a periwinkle blue mod sequined number with what looks to be either rock studs or jewels adorning the collar and cuffs of the 3/4-length sleeves: Basically, when she picks up her trophy for "Most Awesome Person Ever," she's going to look amazing.