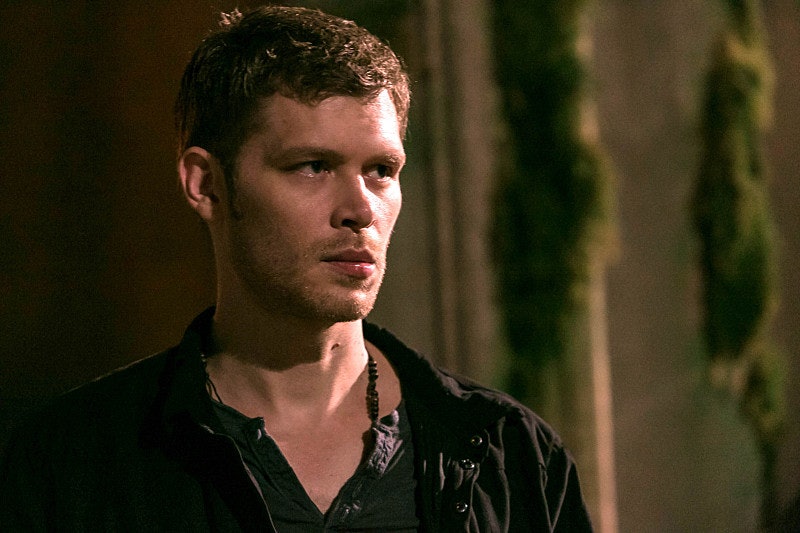 Clearly it's possible for The Originals to have even more daddy issues. Trust me, I'm as surprised as you are. On Monday night's episode, "The Wheel Inside The Wheel," The Originals revealed that Klaus' real father is alive. After Klaus spent his whole life hating the fact that he grew up without his real father and, instead, got stuck with Mikael who hated him because of Esther's infidelity, Hansel (yep, that's his name) is alive. Obviously, there won't be a happy reunion here — Esther brought Hansel back to convince Klaus to agree to her terms. And, if we've learned anything from Klaus since he debuted on The Vampire Diaries back in Season 2, it's that he absolutely doesn't need another father in this life or the next.

Klaus went looking for Elijah during Monday night's episode and ultimately and unsurprisingly ended up finding Esther. Can we just take a moment to think about how insanely creepy this woman is? OK, so, Esther got to Klaus but, unlike Elijah, she didn't decide to string him up and force memories back into his head. Because Esther only needed Klaus to remember one memory — the day he found his biological father dead by Mikael's hand. It seemed so simple, especially after the torture the Mikaelson matriarch inflicted on Elijah, but she had bigger plans for Klaus.

A slight change of scenery in "The Wheel Inside The Wheel" took The Originals back to the Bayou and reintroduced Jackson — yes, Hayley's betrothed — and, SURPRISE, Hansel. We didn't know who he was yet, but he clearly has a thing against supernatural creatures that aren't werewolves and werewolves that do other creatures' bidding, so he agreed to help Hayley spring Elijah and Oliver from their respective bad situations. Well, he ultimately stumbled upon Klaus and had a moment, which Klaus found terrifying. (Understandable, because Esther had conjured up a vision of Elijah earlier in the episode to lure Klaus into a trap.) I mean, Hansel's been dead for thousands of years — Klaus saw his dead body — there's no possible way he's really alive, right?

Wrong. Esther brought Hansel back right before The Other Side collapsed and, according to her explanation, dropped him off in the Bayou to acclimate himself among fellow wolves. So, Esther's introduced another variable into her game, but what for? It wasn't difficult for her to pull Elijah in, why couldn't she just subdue Klaus the same way? Because she knows Klaus' weakness and she knows the chip he carries on his shoulder about having to grow up without a father who loved him. Klaus is a hybrid and Hansel is a wolf — Esther's obviously banking on Hansel convincing her son to take her offer and be stripped of his immortality so that he can join his father's family.

That would all be totally fine if Klaus actually wanted a father or father figure at this point. But I have a feeling that, no matter how much Hansel tries to get Klaus to come around, he's going to have a hard time trusting another man who's at Esther's mercy. Klaus might be scarred, but he's not stupid.