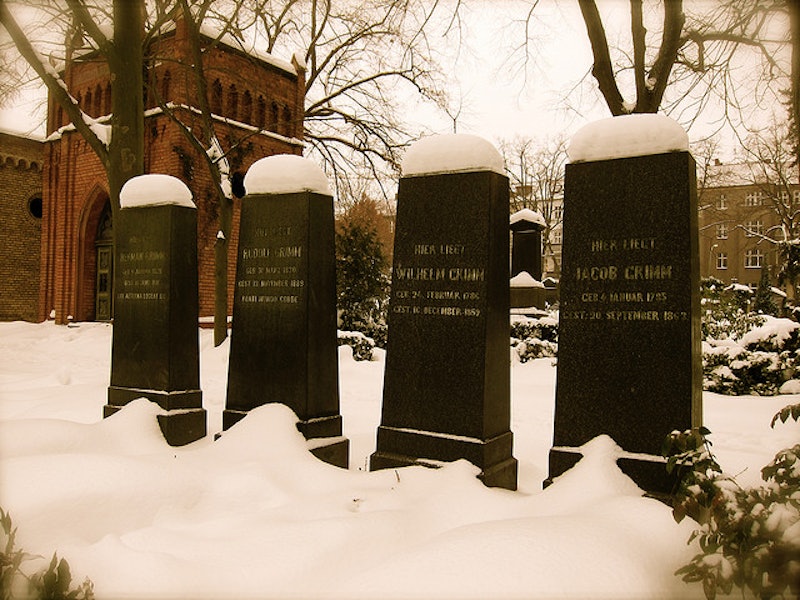 You’ve seen the Disney-princess version of fairy-tale women — Cinderella, Sleeping Beauty, Snow White, Rapunzel, the Snow Queen — but fairy tales aren’t all princesses and evil witches. The original Grimm tales paid homage to wicked women who dish (and receive) the creepy, uncanny, and grotesque — after all, when you really look at those happy endings, fairy tales are some of the most senselessly violent stories on the planet.

For thousands and thousands of years (think The Epic of Gilgamesh circa 2000 BCE), fairytales reigned as the preferred mode of storytelling. Today, we think of these diverse and varied stories as simple-minded and didactic — kids’ stuff. The Brothers Grimm would be turning in their graves if they knew of the Disney debauchery so prevalent these days. In fact, their fairy tales weren’t meant for children at all. Mothers who banished, butchered, and ate their children weren’t evil stepmothers — that detail was added later, when the brothers realized that parents were reading their horror stories to children at bedtime.

Women in the fairy stories below participate in every manner of depravity and self-indulgence. They also prosper under the most gruesome circumstances. If you’re looking for inspirational heroines, these dark, magical, powerful ladies — not their watered-down, guileless counterparts — certainly top my list.

"How Children Played Butcher with Each Other"

What begins as child’s play in this story quickly devolves into murder and — dare I say — cannibalism. Young boys and girls decide to play butcher: one boy plays the pig, one the butcher, one girl plays the cook, and a third boy plays the cook’s assistant. The “butcher” stabs the “pig” in the neck, killing him, and the “assistant” catches his blood in a basin, so they can make sausages. Before our young girl heroine can cook up the slaughter, the butcher is taken to the mayor’s office where they perform a test to see if he should be punished. Unlike most fairy tale villains, this butcher boy narrowly escapes doom, and the butcher girl escapes scot-free.

"The Seven Ravens" & "The Robber Bridegroom"

When you think of fairy tales, you probably don’t think of missing appendages. Well, you should! Severed fingers play a starring role in both “The Seven Ravens” and “The Robber Bridegroom.” In the former tale, the princess cuts off her own finger and uses it as a key to open the door to the glass mountain (Donald Barthelme’s own, more masculine version, “The Glass Mountain,” shares this tale’s setting). In “The Robber Bridegroom,” the bride-to-be finds a woman’s severed finger on the floor of her fiancé’s house; she keeps the finger and uses it to expose her betrothed the next night at dinner.

Also known as “Furrypelts” and “Thousandfurs,” this tale tells of a princess whose dying mother wishes for her husband (the king) to only remarry if he can find a woman as beautiful as she. Well, the king turns a lustful eye to his golden-haired daughter, declaring her as his next bride. The princess dirties her face and flees wearing the skin of a donkey, or of a thousand beasts, depending on which version of the story you encounter. Imagine losing your mother, your trust in your father, your home, all your friends, and your beloved donkey all in one year — this is one destitute princess!

"The Girl With No Hands"

If you think the woman in the previous tale had it bad, meet The Girl With No Hands. After making a deal with the devil, the girl’s father chops off her hands with an axe because they are too clean for the devil to touch. She cries her stumps spotless, thwarting the devil’s advances, but decides she must leave home — with her maimed arms strapped to her back — to find her own fortune. Eventually, a king marries her and fashions her a pair of silver hands, but her bad luck is far from over. Read the rest of the tale to find out what adventures befall her next!

Ignoring the warnings from her parents, the curious young girl in this short tale visits Mother Trudy’s house only to be turned into a log and tossed onto the fire. Of the girl’s fate, the witch says: “Now that really does give off a nice bright light.” Did this tale inspire the prophesying Log Lady of Twin Peaks fame? I’d like to think so.

"The Nixie of the Millpond"

Similar to sirens, selkies, and mermaids, nixies are shapeshifting water spirits, usually women, who often get the best of the men who confront them. The nixie in question tricks the miller into gambling with his firstborn son. The miller grows rich; the son marries and is dragged into the waves. Eventually, the son’s heartsick wife reunites with her beloved, but not before enduring transfiguration, amnesia, and years of separation.

Sounds innocent enough — gooses, girls. But this passive princess has her identity stolen after losing the bloody, and magical, handkerchief her mother gave her. What’s worse, the usurper, a former handmaiden, becomes queen and orders the execution of the princess’ talking horse, Falada. Every day the princess walks by the posted head of her beheaded horse and sings it a sad song before tending to the geese in the fields. Not to worry, the deceptive handmaiden gets her due: She’s placed in a barrel studded with sharp nails and dragged behind two white horses, to her death.

You may have heard of the Erlking — king of the elves known for ensnaring young girls — well, meet his female counterpart. We’ll call her the Erlqueen. The forest-dwelling woman in this tale bewitches innocent girls, turning them into nightingales before trapping them in baskets in her castle. The beautiful woman Jorinda succumbs to this fate, while her bethrothed, Joringel, is turned to stone and forced to watch. We soon discover the Erlqueen has enslaved more than 7,000 princesses as birds — imagine all the droppings! — who are rescued after Joringel regains movement and has a prophetic dream.