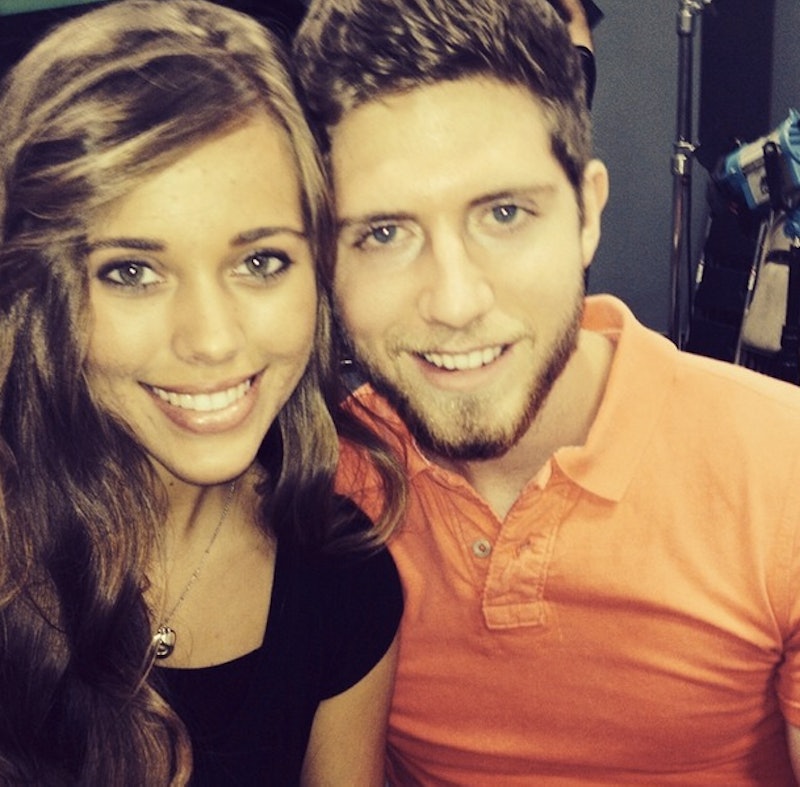 How will we go on after the 19 Kids and Counting Season 9 finale airs on Nov. 11? How will I go on without seeing Jessa Duggar and Ben Seewald's wedding on 19 Kids and Counting ? Honestly, I can't answer either of these questions because I just recently discovered the wonder that is TLC's reality series about the Duggar family. I know, it's crazy — but better late than never, right? Jessa and Ben's rumor-filled wedding happened just shy of two weeks ago and, like all reality series, it won't be shown on this week's 19 Kids finale because, well, Jessa's engagement just aired last Tuesday. So, when will Jessa and Ben's wedding air on 19 Kids ? You'll be waiting a while, Duggar fans.

If we look at the precedent TLC and 19 Kids set with how many episodes between the engagement and Jill Duggar's wedding to Derick Dillard, we're looking at a late Season 10 wedding episode for Jessa and Ben. Between Jill's engagement episode, "The Proposal," which doubled as the Season 8 finale and her wedding episode, Season 9's "Jill's Wedding," 13 other 19 Kids episodes aired. So, it's probably safe to assume that, since Jessa's engagement occurred during the penultimate episode of Season 9, 19 Kids fans will be waiting until the middle of Season 10 to see the pair say "I do," possibly in Episode 12. I know, that seems like an extremely long time to wait and if you can't bear it, I might have some good news for you.

TLC's already posted this exclusive first look at Jessa and Ben's wedding on their site from the day before the actual ceremony:

Could this mean that the network intends to give us Jessa and Ben's wedding earlier in Season 10? I mean, it'd make sense considering the sex-in-a-church rumors that sprung up after the couple tied the knot — there's obviously a high demand to see the Dugger-Seewald nuptials onscreen sooner rather than later. Rumors aside, however, is there anyone out there that doesn't want to see Jessa's beautiful wedding gown in action? Sure, the photos were magical, but that gown deserves every minute of screen time it can get.

Either way, whether we get to see Jessa and Ben's wedding at the beginning of Season 10 or later on, the wait is going to be painful. I want to see this couple not-kiss during their ceremony in REAL TIME — reading about it on the Internet just isn't cutting it for me. Get a move on, TLC. In the meantime, I'll be here trying to figure out how to fill my days without 19 Kids and Counting until Season 10 premieres — if you have any ideas, help a sister out.