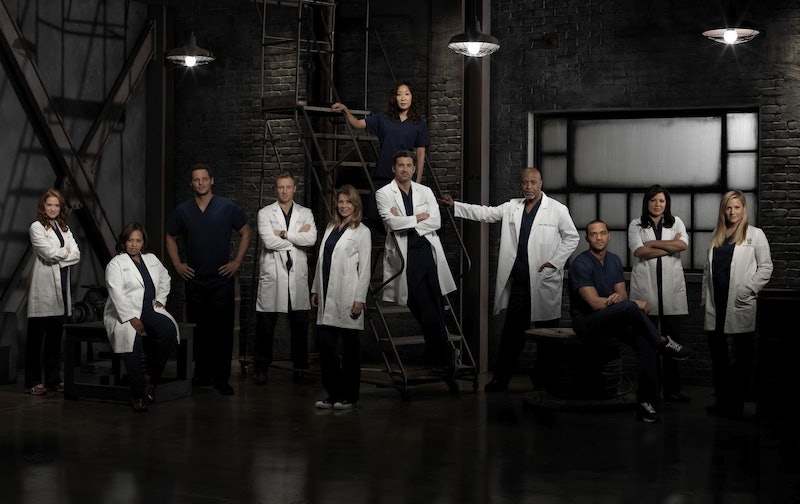 Grey's Anatomy is about to debut it's tenth season. Yes, you read correctly, its tenth season. The recently released synopsis and trailers for the two-hour Season 10 premiere have given little away except for the fact that big drama is to come in the wake of the "Perfect Storm". But, as a viewer, are you surprised? Grey's has killed off main characters and centered episodes around natural disasters and large-scale accidents with multiple casualties and injuries before.

Before we queue up in front of our televisions on Thursday, Sept. 26 at 9 p.m., let's take a moment to remember some of the series' most dramatic moments...

Ep. 5: "Bring The Pain": If you thought that the current storm ravaging Seattle is the first of the series, think again. In Season 2 the first big storm hit, then-named Seattle Grace Hospital, forcing a power-outage that traps George O'Malley, Alex Karev, and a patient in the elevator. The pair then perform a impromptu heart surgery on a critical patient. Undoubtably George's shining moment.

Ep. 6: "Into You Like a Train": The first large-scale accident debuts: a train crash with multiple casualties.

Ep. 16 & 17: "It's The End of the World/As We Know It": A man arrives at the hospital with a bomb lodged in his chest, leading to a story-arc that spans two episodes.

Ep. 15: "Walk on Water": A barge crashes into a ferry boat in the second large-scale, mass-casualty/injury accident. Most of the characters have heroic moments, but Meredith Grey steals the show by "giving up" and letting herself drown. (SPOILER: She doesn't actually die.)

Ep. 9 & 10: "Crash Into Me: Part 1 & 2:" An ambulance collision in the ER bay leaves multiple paramedics in critical condition fighting for their lives and others trapped in the wreckage. Miranda Bailey and Cristina Yang face racism in the form of a patient with a swastika tattooed on his stomach.

Ep. 24: "Now or Never": "John Doe" enters the hospital for treatment after being struck by a bus. The team later finds out that it's actually their colleague George O'Malley.

Ep. 1: "Good Mourning": The doctors of Seattle Grace mourn the death of their own, beloved, George O'Malley. Another shining moment for George, his death was probably the most-mourned by viewers of all.

Ep. 14: "Valentine's Day Massacre": A roof collapses on a popular restaurant on Valentine's Day (see title) and the doctors must treat dozens of injured patients.

Ep. 23: "Sanctuary": Gary Clark, the husband of a deceased patient, enters the hospital heavily armed and goes on a shooting rampage that leaves Alex and Derek Shepherd injured.

Ep. 18: "Song Beneath the Song": Callie Torres and Arizona Robbins get into a car crash en route to a romantic weekend getaway, moments after Arizona proposes, that leaves Callie suffering from severe injuries and their unborn child in danger.

Ep. 23 & 24: "Migration/Flight": Doctors Meredith, Cristina, Derek, Mark Sloan, Lexie Grey, and Arizona board a flight to Boise, ID to take part in a surgery on conjoined twins that ends up crashing in the woods. Everyone survives, though some badly injured, except for Lexie, Meredith's younger half-sister.

Ep. 23 & 24: "Readiness Is All/Perfect Storm": Where we left off at the end of last season, with a second major storm threatening the newly renamed Grey Sloan Memorial Hospital. Meredith goes into labor (finally), the hospital loses power for the second time in nine seasons, AND a packed school bus flips over right outside of the hospital. Not one, but three dramatic situations all happening simultaneously.

The overwhelming Season 9 finale will be tough to out-drama.