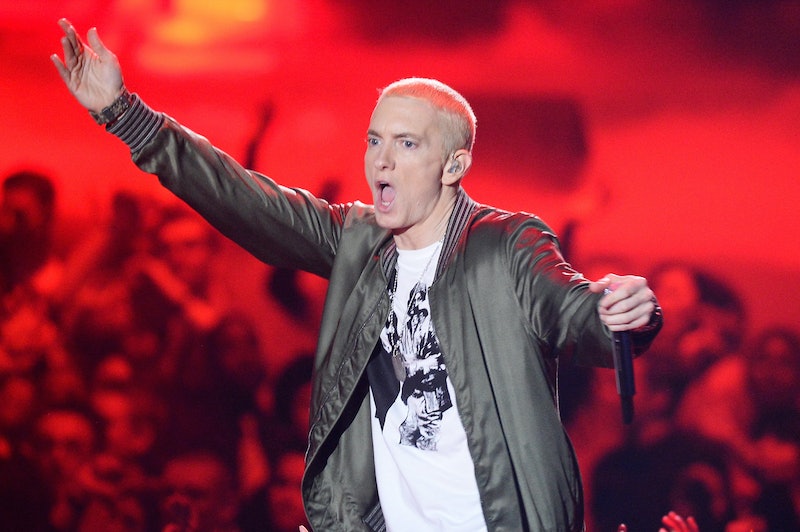 Back by unpopular demand, Eminem released a new freestyle video to promote his upcoming album Shady XV, and the lyrics to Eminem's freestyle are truly shady as shit. In one horrific line, he manages to glorify domestic violence and raging homophobia: "But I may fight for gay rights, especially if they dyke is more of a knockout than Janay Rice / Play nice? / Bitch I'll punch Lana Del Rey right in the face twice, like Ray Rice in broad daylight in the plain sight of the elevator surveillance / 'Til her head is banging on the railing, then celebrate with the Ravens." Good. God. Man. Obviously Eminem's rampant misogyny is nothing new, but after such a direct attack on Rice and del Rey, I have to wonder: will they respond?

Janay Rice, if you have somehow forgotten the horror, is the wife of former Baltimore Ravens player Ray Rice, and was the victim of gross abuse revealed in a video obtained by TMZ. It showed Ray Rice knocking her unconscious and then dragging her body out of an elevator. To even type the words turns my stomach. This week, NFL commissioner Roger Goodwell is testifying to his involvement in the incident because it's widely known that he was aware of the video well before TMZ released it to the public and yet sat idly by — therefore condoning the abuse. That Eminem would make light of such a horror not only speaks to how low the rapper is but also to a culture that allows such music to be made.

Sad, too, is the fact that del Rey has, in the past, confessed to loving Eminem, saying that he taught her that "music can have intellect and come from a real place." Surely the 29 year old singer won't find his most recent lyric threatening to beat her senseless and then celebrate it intellectual. How could she? If Rice and del Rey do respond to Eminem's gross misconduct and utter, insensitive tastelessness, I hope it's with furor and resounding condemnation.

Victims have no obligation to engage with their abusers. Not only is Eminem capitalizing on one woman's tragedy, but he's using it to threaten and verbally abuse another woman. It's like a misogynistic double whammy. Not to mention his hateful homophobia, making it a triple threat of disgusting. While I do hope that del Rey and Rice speak out in response to the lyrics, I would understand completely if they were silent.

Staying silent when you see evil is being complicit. It makes you culpable. Staying silent when you are the victim of evil does not make you culpable. It makes you human. Though I do hope that del Rey and Rice have the strength to respond to Eminem's lyrics, no matter how angrily they might do it (and they have every right to be furious), there is another part of me that hopes that they remain silent. Once they open themselves up to the conversation, I know there will be victim-blamers and other woman-haters that will emerge from the woodwork to accuse them of not being able to take a joke. Because it seems like that is what this domestic abuse is seen as: a joke. If it weren't, why would it be made into a Halloween costume?

More like this
Beyoncé Sent Flowers To “Masterpiece Genius” Madonna After The “BREAK MY SOUL” Remix
By Grace Wehniainen
Lauv Is No Stranger To Taylor Swift, Drake, Ed Sheeran, & Fame
By Alyssa Lapid
Who Is Camila Cabello Dating? She's Getting Cozy With Lox Club CEO Austin Kevitch
By Radhika Menon
Someone Must Pay For What Happens To Bad Bunny In 'Bullet Train'
By Arya Roshanian
Get Even More From Bustle — Sign Up For The Newsletter