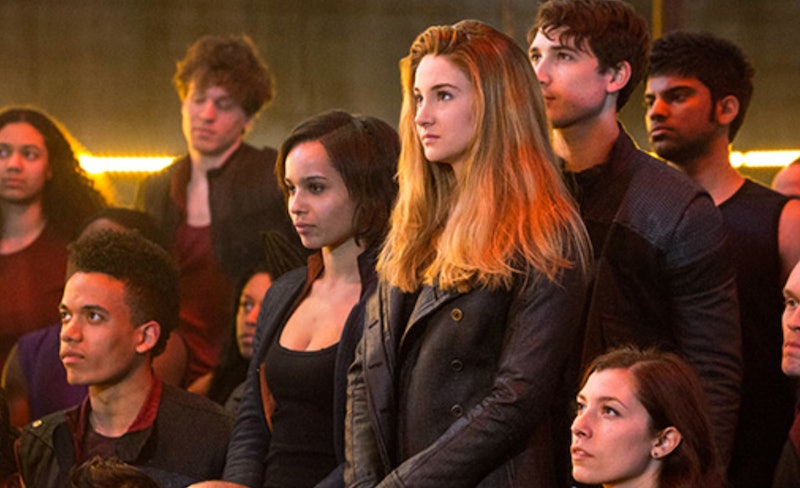 The YA fiction trend prides itself on celebrating individuality, uniqueness, nonconformity — you know, divergence — and yet so many of its entries follow the exact same formula. One go-to trope of the genre is the romance: the relationship between the central heroine and a troubled but good-hearted male… or two. Now, we saw the beginnings of a good old fashioned one-on-one love story in the first of the unfortunately named The Divergent Series movies, between star Shailene Woodley and an amply tattooed Theo James. But there is something impressively different about this lot, as we can see in the trailer for the second film in the franchise: Insurgent . The main relationship of Woodley’s Tris isn’t with her grimacing beau, but her mom.

In keeping with the trip-into-the-mind scene we saw in Divergent, the first teaser of the new film sticks a tortured Tris in the middle of her worst nightmare. Apparently, Tris’ worst nightmare includes floating houses (she must really hate Miyazaki movies) that happen to be on fire. But the real heart of her horrors is the death of her mother, revived in this dream sequence by Ashley Judd. It appears that her death in Divergent will loom heavy over daughter Tris in the sequel.

Tris’ mom Natalie was killed at the end of Divergent following revelation that in youth she was, much like her daughter, a warlike Dauntless… which, for those uninitiated, is the future Chicago clique that likes street-fighting and jumping out of moving trains.

It is encouraging to see Insurgent build its drama on the relationship between mother and daughter, rather than that between girl and guy-she-just-met-and-thinks-is-just-groovy-enough-to-devote-herself-to-entirely… like so many others. While The Hunger Games series has its own strengths over Divergent, Katniss Everdeen’s rapport with her mother — a depression-stricken women — is largely relegated to the background while relationships with the overbearing Gale and wet fish Peeta take center stage.

I don’t expect the Tris-and-Theo of it all to fade entirely from the Insurgents and Allegiants yet to come, but the fact that The Divergent Series has opted to kick off its upcoming movie’s marketing on a note instead between Tris and Natalie gives hope to an inspired leavening of its values. Like Dorothy Petrillo, Buffy Summers, and (the mother of them all) Rory Gilmore, Tris’ most important relationship is not with some fella, but her mom.

More than just an upping of the “aww” factor, a display of such could be empowering for young viewers. To bask in the unconditional love, support, and respect of a caring parents and invest yourself therein will likely reap much healthier benefits than if that same basking and investment were to be directed to a cute schoolmate who seems just sensitive enough to look past the fact that he’s threatening you with emotional manipulation (I’m looking at you, Edward Cullen), or whose principal defining characteristic can be deemed “perpetual shirtlessness” (and you, Jacob… Jacob… see?! It’s impossible to even remember that dude’s last name!).

Although Insurgent has a lot of qualitative improvements to make on its predecessor, at least it’s starting out with a good head on its shoulders. This story seems like it is, and very well should be about Tris and Natalie: two women who never quite felt like they belonged, yet always (at least tacitly) had each other.

More like this
A 'Bridgerton' Star Just Dropped A Major Hint About Joining The Live-Action Barbie Cast
By Bustle UK
'Stranger Things' Star Joe Keery Is Dating An "Indie Scream Queen"
By S. Atkinson and Grace Wehniainen
Laura Dern Said “Cultural Awareness” Made Her Rethink This 'Jurassic Park' Fact
By Grace Wehniainen
The 'Hocus Pocus' Sequel Finally Has A Release Date & It Makes Total Sense
By Shannon Barbour and Radhika Menon
Get Even More From Bustle — Sign Up For The Newsletter