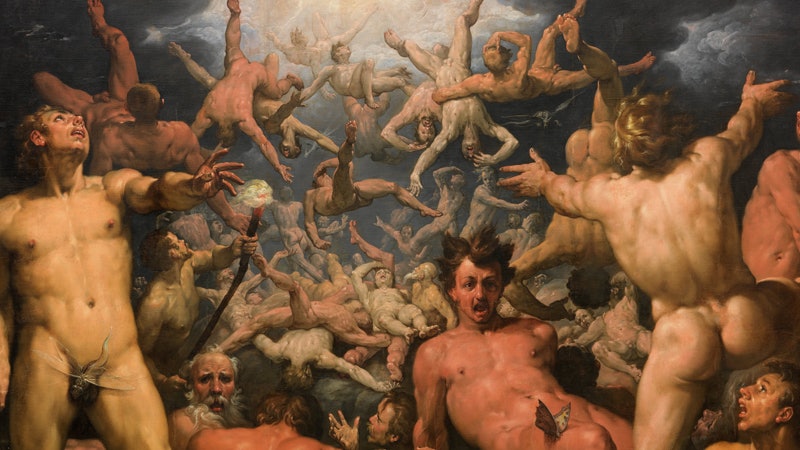 Despite what the wave of media coverage popping up around that Kim Kardhasian naked butt photo on the cover of Paper Magazine will try to tell you, we didn't just wrap up the Summer of Butts. We're also not almost poised to start the Winter of Butts, and we're not even wrapping up the first Year of the Butt. Though Kim K.'s Internet-breaking butt — as well as the rest of the recent crop of high-profile derrieres — are fairly new mass media developments, we've actually pretty much been living in the Year of the Butt for as long as we've been utilizing the concept of years.

Though the sizes, shapes, and styles of butt depicted in our artwork have varied wildly through different eras, human beings have been dead-set on depicting the human butt from among the very first moments when we scratched stick figure humans into cave walls thousands of years ago. In the centuries since, we've hardly had a moment when someone wildly talented wasn't laboring day and night to depict an eye-catching, finely toned, totally mesmerizing butt. And so, in that way, Kim and her champagne-bearing backside are really part of one of mankind's longest and most glorious artistic traditions.

I should mention here that I am no art historian; I am not even a person who successfully completed an art history course at the collegiate level (I dropped it for a film theory class where we just got to watch episodes of Alias). I am merely an enthusiastic fan of butts in all their forms, both historical and modern.

And so, with that, I present to you 15 of the most delightful butts in art history, ranked in order of Internet-breaking potential. But really, when it comes to butts, every butt is a winner. Take a minute off from reading about how many ounces of hot oil they needed to make Kim's butt shine like that, and give these historical butts some love.

And if you'd like to learn more about great butts in art history, please check out the Tumblrs Art History Butts and A History of Art, But Butts, or simply head over to your local art museum's library, and prepare to make everyone working there very, very uncomfortable.

When you haven't even gotten around to taking part in the Fall of Man, I guess there's nothing to do but work on your glutes.

This painting draws the definitive connection between high art and that pose that people are always doing in naked selfies.

I'm not going to go so far as to say that Baronesse Mary Vetsera was the Kim K. of her day, but she was a smokin' society babe from a wealthy family. Except instead of becoming a super-successful multi-media star, she died in a murder-suicide pact with her boyfriend, Prince Rudolf of Austria. Sorry! I just mentioned that because I thought it was interesting! I wasn't trying to make this into a depressing butt!

Is Charon the mythical boatman of Hades, who ferries souls across the rivers of the dead? Yes. Does that make his butt any less fantastic? No.

This is the sassiest trip to a doctor's office that I have ever even heard about.

What year are these Bulgarian cave paintings from? One that happened a very, very long time ago. Though this cave contains human engravings going back to the Paleolithic age, I chose this one because it symbolizes man's first attempts to draw an accurate butt — but if you look on the upper right, you'll see that this drawing also contains early man's first attempts to immortalize the mighty boner, as well.

Supposedly, this painting has something to do with wrestling? Sure, whatever, Eakins, you kook, you.

I don't know enough about art history to officially call William Etty "one of the undisputed kings of the art butt," but I'm still surprisingly confident in that assessment (get it? "Assessment"?)(Sorry.)

You ever look at this stuff and think that maybe you were just born in the wrong era?

I think this is just one of the best butts I've seen in a while. I can't describe what it is about it, but it's just making me happy. Not even in a sexual way. It's just an extremely joyful butt.

When we break the human form down to its basic shapes, we find that we are mostly composed of awesome butt.

OK, fine. The internet was around in 2009. But so were you! Why didn't you tweet about this amazing butt? You're just as guilty as anyone else here!

A classic for a reason, "David" is the first nude male adult butt that many of us ever see — and just like the first person you ever kiss, it retains a warm place in your heart forever because of that.

Though it would be easy to let this small butt get lost in the enormous crowd of the massive, three panel painting that it comes from, it's actually one of art history's most remarkable butts — the notes drawn on it can actually be played, as the so-called "600 year old butt song from Hell." The song was recorded both in 1978 by as "Codex Gluteo" by Paolo Faiella, and also by an Oklahoma college student earlier this year (a choral version of the butt song from hell was also recorded in 2014). The new recording didn't go so far as to break the Internet, but still did attract a lot of media attention for an imaginary butt painted over 600 years ago. So while this isn't necessarily a sexy butt, I feel like it's an important butt.

More like "Butts of the Titans," right, guys?...I'll show myself out.