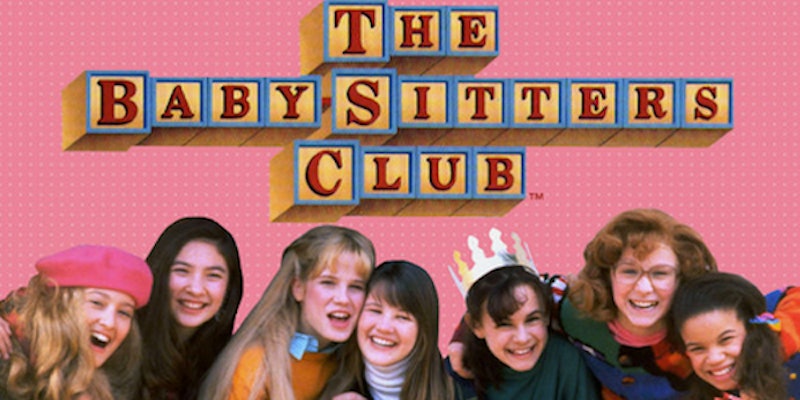 I know, I know, The Baby-Sitters Club was always known for its structure and predictability. Among the 131 original novels (and super specials, mysteries, super mysteries, and so on), nothing really changed in Stoneybrook. Every book we were reintroduced to future power woman Kristy Thomas, all cats-and-tears Mary Anne Spier, walking Etsy shop Claudia Kishi, SO New York Stacey McGill, self-righteous-BEFORE-it-was-hip Dawn Schafer, and the two 11-year-olds. People moved around on occasion, and there was that whole Abby Stevenson thing, but ultimately consistency was a core element in the BSC.

So what could possibly be so daunting about the show? It's a blend of distinctive low-budget '90s cheesiness, small-but-noticeable character alterations (Dawn eating ice cream? She would never), bizarro plot lines, and a cast of pre-teens painfully phoning it in. Plainly put, it's hard enough to translate the books seriously for an hour long movie, let alone a six-and-half hour long series.

Last night, I rewatched the entire 13 episode series so you don't have to, and, as the ultimate treat, I compiled the 13 weirdest things from The Baby-Sitters Club show. Here they are, and you're welcome.

The opening credits change slightly every episode — sometimes they're riding bikes together, sometimes they're getting pizza, etc — but I don't take issue with that. See, the lyrics are, "Say hello to your friends: baby-sitters club," a deeply problematic and misleading statement because NO ONE IS FRIENDS WITH THE BABY-SITTERS CLUB. Every time a member tries to expand their social circle (Claudia with Ashley Wyeth, Stacey with Robert's group) the BSC collectively freaks out. I understand being really clique-y in middle school, but what they have is actually deeply unsettling thing.

2. Almost Everyone’s Hair is a Wonky Imitation of the Canon

Stacey, whose perm is supposed to be a beacon of sophistication, looks like the love child of Cousin Itt and Robin Sparkles. Alleged ballerina Jessi is RARELY seen wearing a bun. And Claudia, constantly described as having "long jet black hair" has long BROWN hair. This is an outrage, I demand to speak with the manager.

I don't know, she has some sort of dumb fight with Logan and seeks console in her sitting charge, one of the younger Rodowsky boys, no less. And he has pretty solid advice, such as, "You’re not a jerk, Mary Anne, just a little bit silly." Get your crap together, Mary Anne, geez.

They're talking about their next door neighbor who may-or-may-not be a witch (spoiler: she's not) and he mentions that he saw bones in the backyard. And then he's all, "Sometimes, I hear her at night.” Meep.

5. This Girl Celebrating a Mouse’s Birthday

Her name is Courtney, and Kristy decides she's going to be the president of 3rd grade? And then her and the entire Baby-Sitters Club spend all their free time working on a campaign for a 3rd grader? I can't.

Look, I get that in a post-Tavi Gevinson world Claudia Kishi is considered the template for every modern fashion blogger. Let's face it, we all looked forward to her outfit descriptions in Chapter 2. HOWEVER, in the series she creates these earrings that are tacky, clunky and garish, even by late '80s/early '90s standards. And we're to expect Claudia could sell those off in the Village? Oh hell no.

7. I Have No Idea What The Brewer-Thomas's Hired This Woman For

Yeah, the one trying on Claudia's hideous earrings. She works for the Brewer-Thomas clan, but Kristy hates her for some reason, and claims she doesn't baby-sit nor clean up the house. So what exactly does she do? Fold clothes? Do they honestly pay her to fold clothes? Wow. Rich people, amirite?

8. This Entire SAT-Word-Laden Speech From Janine

“I’m aware of your organization’s schedule. But on occasion your meetings run late, and today, since it is imperative for me to be at another location at 7 o’clock, I want to ensure that your meeting adjourns promptly, so that our math tutoring session will convene as we previously arranged.”

Dude. Janine's kind of a prick.

When I'm not Netflixing The Baby-sitters Club I'm Netflixing Gilmore Girls, and I recognized her voice immediately. I zoned out in the middle of the episode, but basically ends with her, the BSC, and their respective sisters/step-sisters/Charlotte Johanssens playing ring-around-the-rosie while wearing floral wreaths. What.

Baby Tamborelli as the town troublemaker is actually kind of fitting, given his Pete and Pete days.

That's right, before his appletini-swilling days as JD from Scrubs, Braff had a small role as a swoopy-haired love interest of Dawn.

He has that Kentucky drawl in Episode 1, and it is groan-worthy, so it's no big loss when it disappears in the middle of the series. Logan's still awful throughout the series, much like the books.

13. Not One Episode Features Mallory as a Main Character

Bonus: Kristy Thomas Nursing a Pig in a Bonnet