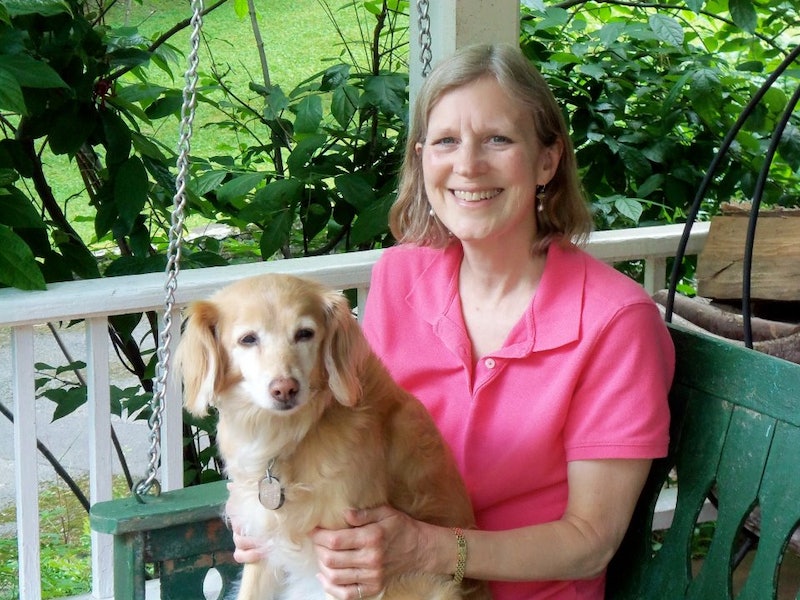 The author of your favorite book series from your childhood, 'The Baby-sitters Club,' has a new middle grade book out this month. Ann M. Martin's new novel, Rain Reign, is told from the perspective of Rose, a 5th-grade girl who has high-functioning autism and OCD.

Rose loves her dog Rain more than anything in the world, even more than homonyms, which she keeps a running list of when they come up in conversation. She lives with her father Wesley, an alcoholic who just never seems to know what to do with his daughter as she struggles to behave "appropriately" in school (yelling out when someone has broken a rule, or mentioning every homonym she notices). But the morning after a major storm, Rain has gotten loose, and Rose sets up a plan to get her back.

Martin's novel is hopeful, but it's also incredibly heartbreaking. Take it from me: I spent almost the entire second half with my trusty box of tissues by my side. I spoke with Martin about her experiences writing Rain Reign, and of course, about how our favorite babysitters ever, Kristy, Mary Ann, Stacey, Dawn, and Claudia (*cough* the best one *cough*), are doing now in 2014.

BUSTLE: Rain Reign's main character Rose has OCD and Asperger's, and probably one of the most compelling and unique aspects of the novel is that it's told entirely in her voice, from her point of view. What was challenging or interesting about taking on her voice?

ANN M. MARTIN: It wasn't challenging necessarily as much as fascinating. Rose's character has been decades in the making. I've been fascinated by kids who are on the autism spectrum since the 1970s when I worked during summers after college at a school for kids—well there was not even the term Asperger's Syndrome or "on the spectrum" then—with autism. I minored in special education in college. I had two majors, psychology and education, with a minor in special ed. I continued to read about children with autism, and I was fascinated a number of years ago when The Curious Incident of the Dog in the Night-time came out.

I don't know why exactly, but it's something that has spoken to me for years. It wasn't really a stretch to want to write about a child with autism, but also to write in Rose's voice. Her voice started to come to me a few years ago, her obsessions, the things that fascinated her, her interest in homonyms and her other quirks.

My first name has a homonym, and I gave my dog a homonym name too. Her name is Rain, which is special because it has two homonyms — rein and reign. I will write more about Rain in Chapter Two. Chapter Two will be called "My Dog Rain (Rein, Reign)."

Something important about the word write is that it has three homonyms—rite, right, and wright. That's the only group of four homonyms I've thought of. If I ever think of another four-homonym group, it will be a red-letter day.

So when I began to write Rain Reign, there was never a question from me that I would write in Rose's point of view. It became interesting while I was writing from her point of view because Rose's world is all about trying to make sense of what's around her, to put her world into order because it seems overwhelming to her. So when everyone's world is thrown into chaos after the storm, it was interesting to me that it was Rose who was going to try to make order out of things because this is what she spends so much of her time trying to do anyway.

The novel address a lot of real life issues that children go through, such as these deadly storms, alcoholism, and even some parental neglect, and it speaks of them honestly. This is particularly on the minds recently coming out of Banned Books Week, which aims to shield children from these kinds of themes. What made you want to tackle these issues and present them to the middle grade audience?

Unfortunately, there have been so many superstorms lately. The one that affected me was not Hurricane Sandy, but before that Hurricane Irene. Many children have lived through these storms now that it seemed natural to want to write about that. A number of the things that the kids in Rose's classroom after the storm, in fact, were things I'd heard kids say or that have happened to friends of mine. It was a friend of my sister's, who like Parvani's mother, lost all the artwork she had created for so many years.

The other things, especially Rose's father's alcoholism, was that I was trying to create an environment for Rose that would be absolutely the wrong environment for her and children like her. But I didn't want to necessarily paint her father as a stock evil character, because he's more complicated than that. Yes, he has alcoholism and yes, he's probably the worst kind of parent for Rose, but you can sort of understand where some of these things might stem from because of his own background...

Some of the comments are nice, such as the ones about when I participate appropriately in a classroom discussion. But most of the comments make my father slam the reports onto the table and say, "Rose, for god's sake, keep your mouth closed when you think of a homonym," or "Do you see any of the other kids clapping their hands over their ears and screaming when they hear the fire alarm?"

I wanted to create these two different worlds for Rose: one that was not the right place for her, even though I do think her father in his own odd way was trying to do his best for her, and then her uncle who just somehow understands her.

I agree that that came through, that her father was just doing the best he could. And he, like probably many people, have a lack of understanding about Rose and her autism.

OK, I have to bring in The Baby-Sitters Club. I don't know if you saw this, but there was a Tumblr that showed 2014 Baby-sitters Club book covers. Where do you imagine those girls are today?

Well, I'm sure that Kristy is probably the head of something or other, if not the President of the United States. I'm clear on Mary Ann: She's probably teaching. And I'm sure that Claudia is an artist. Stacey I'm not quite sure about; the safe answer for her is that she's doing something in fashion but I'm not sure of that. And Dawn, she's an environmental lawyer or something in that field.

You've said before that Mary Ann was a representation of yourself. What did you mean by that?

When I say that I was more like Mary Ann than the others, I really mean more in temperament. Mary Ann is the shy quiet one, and that was definitely me, it's still me.

(And no, Martin noted that sadly there was no Logan in her young teenage life.)

And I think the reason that Kristy has always been my favorite character to write about is because Kristy is so unlike that. It's always much more fun to write about a character who's getting into trouble and who has a big mouth because it was so not me.

The books keep getting re-released, and it's exciting, I'm sure, for new generations of children and teenagers to pick them up to read. What do you hope these young women and men who pick them up now take away from the stories?

First of all, this is what I hope for with any book. If they're not already avid readers that it will spark something and they will seek out these books and seek out other books — that's always the best thing you can hope for. For any kid, but especially for girls, it's always a great thing for girls to see a group of female characters who are independent, who are problem solvers. Here are these girls who are running a business, small as they might be, and they're doing it pretty much on their own. Adults don't play a large role in these books, the girls know they are there to turn to if they really get into trouble, but for the most part the girls solve things independently. I think that's great for any kid to see, but especially for girls to see.