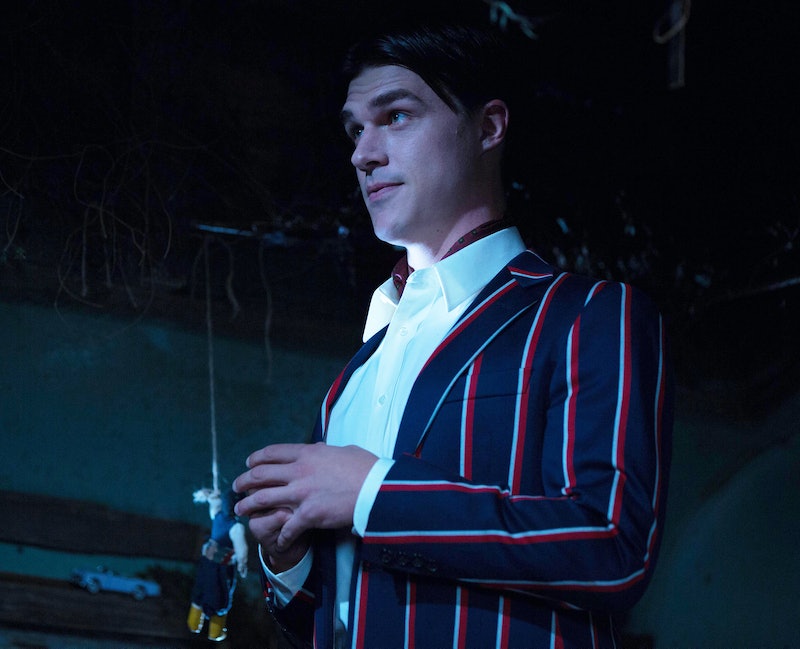 Don't get me wrong, I'm always up for a good guy vs. bad guy showdown, but isn't this happening way too early? Let me go back… Wednesday night's "Bullseye" episode of American Horror Story: Freak Show ended with a cliffhanger that's almost guaranteed to end in bloodshed. I might as well just come right out and say it: Dandy Mott may kill Jimmy Darling. And that's a possibility I am nowhere near ready to face. The thing is we're only just about halfway through the season, making a confrontation of this magnitude seem a little rushed. I mean, maybe I'm only speaking for myself, but is anyone else ready to see either of these characters get killed off? Dandy is the most compelling character this season by far, and as for Jimmy — any AHS universe that doesn't include at least some form of Evan Peters is not one that I want any part of.

And to think this all started because of a few silly diary entries. You see, Dandy is in love with Bette and Dot — or at least he thinks he is anyway. But when he discovers that the feelings he has are not mutual for both twins — Dot in particular — he becomes furious and decides to fully embrace his murderous ways right before tucking a dagger into the back of his pants. And guess who decides to come knocking on the Mott door at that very instant? Jimmy. Sweet, gullible, trusting Jimmy, who has no idea of what he's walking into.

So as Dandy leads Jimmy away from the safety of the outdoors, I find myself struggling with an internal tug of war. I can't decide who I want to survive. It's just too hard. This has quickly become the Sophie's Choice of AHS. Would Ryan Murphy really kill either of these characters so soon? And even if he did, there's no way of predicting who would win. On the one hand, Dandy already has two successful kills under his belt. However, Jimmy managed to escape Dandy's clutches once before (though he doesn't yet know that other clown was Dandy just yet). Either way, I bet those lobster claws of his prove to be pretty powerful fists.

See what I mean? There's no clear winner. (Damn you, Murphy, for toying with my emotions!) The only explanation I see is that both of them are somehow going to miraculously be able to walk away from this encounter alive. I have no clue how given that Dandy basically confessed that he had the twins with him, and I doubt he's going to let them walk out of there without a fight. But if you don't mind, I'm going to remain in denial for a little while longer. Because I can't say goodbye to them just yet. I just can't.