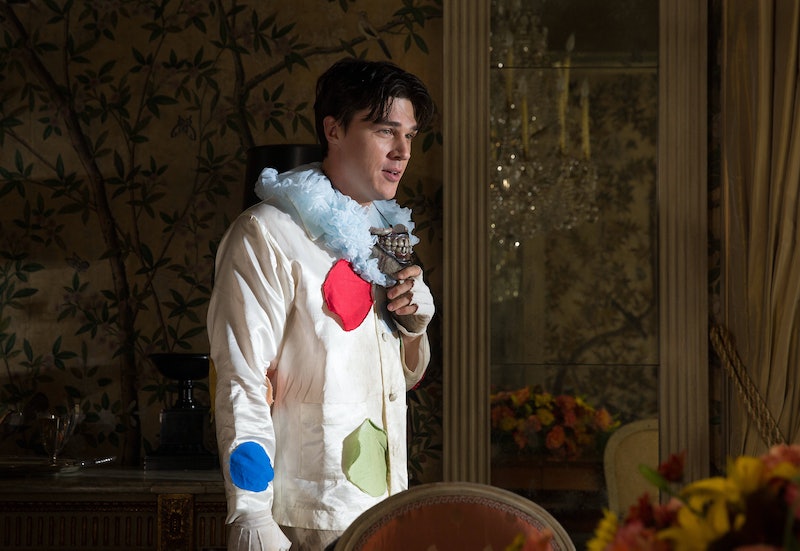 Let's just state this bluntly right off the bat. On American Horror Story: Freak Show, Gloria and Dandy Mott have the most messed up mother/son relationship since... well, since a mild motel owner put on his mother's dress and stabbed a patron in the shower. And that comparison is not coincidental, either. We all should have known Dandy (played by Finn Wittrock) was destined to blossom into a sociopathic serial killer way back in early October, when showrunner Ryan Murphy gave an interview after the season premiere and stated that the character's relationship to his mother (played by AHS mainstay Frances Conroy) was "our homage to 'What would Norman Bates have been like if he lived in Florida?'"

He would have been even more fantastically creepy, apparently. Wittrock portrays Dandy with a severe case of arrested development that is by turns both funny and terrifying. The actor deservedly joins the ranks of other actors who have tackled portrayals of poor, crazy Norman, including Anthony Perkins, Christian Bale, and Freddie Highmore. (And, yes, even Vince Vaughn in that Gus Van Sant remake.)

But these actors all have one other thing in common: author Robert Bloch (who wrote the novel Alfred Hitchcock adapted into his classic thriller) based the character of Norman Bates on murderer Ed Gein — which means that Wittrock and the rest are all playing variations of a very real, very twisted mind.

Gein did not become (in)famous because he was one of the most prolific serial killers in American history. Far from it, actually. He was only ever convicted of one murder (that of hardware store owner Bernice Worden) and then suspected of one other (that of tavern owner Mary Hogan). The reason Gein so captured the public's imagination — in the darkest possible ways — was because of his extracurricular activity: grave-robbing.

Gein would exhume the newly-dead corpses of middle-aged women who resembled his mother (supposedly nine altogether), tan their skins, and use them to decorate his home. His ultimate goal was to build a "woman suit" so he could become his mother by literally crawling into her skin. The young man's unhealthy obsession with his mother is what has continued to fuel Gein's notoriety, far more so than his actual murders.

Just because Murphy says that Dandy is a Floridian version of Norman Bates doesn't mean you should expect a bewigged bathroom bloodbath anytime soon. He's less a direct descendant of Hitchcock's 1960 creation and more inspired by the same psychosis that spawned that iconic villain. So can we find clues about Dandy's storyline on Freak Show by looking at Gein's life?

First of all, there's the issue of the mother. Just like Dandy and Gloria, Gein lived alone with his mother Augusta after his brother Henry passed away. (Some later suspected that Henry was killed by Gein.) Shortly after Henry's death, August suffered a stroke that paralyzed her, and Gein's life was consumed by caring for her. She passed away a year later after a second stroke, and it is assumed that this is when Gein's grave-robbing hobby began. Obviously, Dandy has already started killing people while his mother is still alive, but don't be surprised if Gloria were to suddenly suffer an unexpected and catastrophic illness that sends Dandy on an accelerated downward spiral.

Secondly, there's the issue of the killer's fate. It didn't take the police long to track down Gein: he was brought up on charges only five days after Worden's murder. Dandy can likely stay under the radar as long as he's killing maids and hustlers, but, if he starts offing prominent members of the small Jupiter community, he'll attract attention fairly quickly. And while there's no hardware store owner among Freak Show's cast of characters, there is another type of small business owner: Elsa Mars, the sole proprietor of Elsa's Cabinet of Curiosities. Are Dandy's and Elsa's paths destined to collide?

Apart from Norman Bates, Gein (along with his mommy issues and skin-suits) has also inspired other pop culture killers like Leatherface from The Texas Chainsaw Massacre and Jame Gumb, a.k.a. Buffalo Bill from The Silence of the Lambs. In an interesting twist, this isn't even the first time AHS has adapted the notorious killer to the screen: Asylum's main villain, Dr. Oliver Thredson, a.k.a. "Bloody Face," was also inspired by Gein.

You'll remember that Dr. Thredson took interior decorating advice from Gein, including lampshades made out of human skin and bowls made out of skulls (not to mention his mask made out of another person's face). This connection lends credence to my Bustle colleague's theory that Dandy and Asylum 's Bloody Face are related. After his conviction for Worden's murder, Gein spent the rest of his life in a mental hospital. Does this mean Dandy will end Season 4 confined to an asylum under Thredson's care? Dun, dun, DUN...