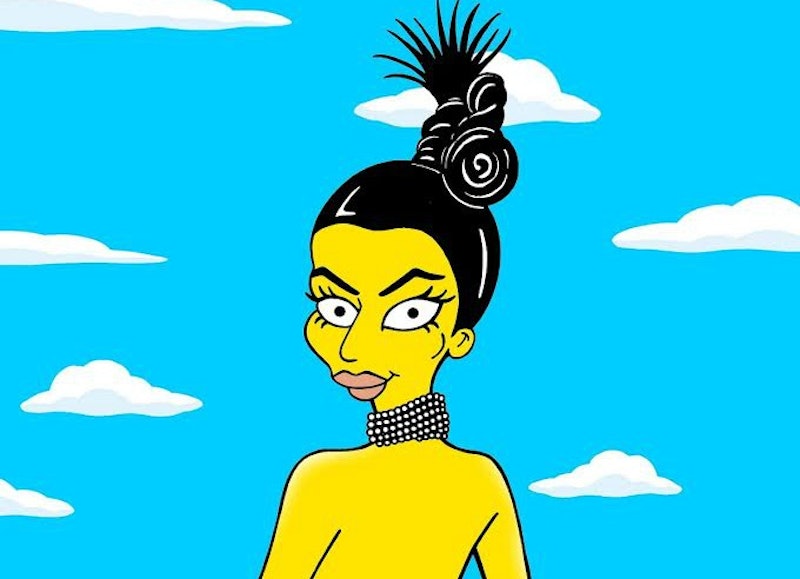 I’ll be honest: I’m still not entirely sure why Kim Kardashian’s bare bummed Paper Magazine cover has had the Internet in such a tizzy; however, it’s proving to be a major pop culture moment anyway, which means that it’s perfect fodder for contemporary artists. Case in point: Italian artist aleXsandro Palombo and his Simpsonized version of Kardashian’s Paper cover. One of many modern artists who often uses figures from pop culture — both fictional and real — to comment on hot button issues, Palombo frequently Simpsonizes celebrities; he’s even tackled Kim and Kanye West (are we still calling them Kimye?) before. And even though his riffs on the Paper Mag cover are just as funny as you probably think they are, I think there might actually be more going on with them, as well.

I’ll admit that I haven’t really bothered to keep up with the whole thing. Of course it’s something Kim would do; of course Photoshop was probably involved (unless we’re specifically told otherwise, it usually is); and of course the Internet would go nuts over it. I haven’t even found most of the parodies of it that funny, probably because I’ve spent so many years writing about the Kardashian krew and their antics that I’ve become completely inoculated to anything they might say or do. Tiffanie Drayton over at The Frisky has one of the more interesting takes on the cover, specifically addressing its sexual and racial implications — but beyond that, I haven’t actively clicked on any of the zillions of pieces that have appeared on the web since its release.

That said, though, I’m usually quite interested in pop culture mashups; they usually say more about how we perceive and consume the entertainment industry than you might think. The way I see Palombo’s Simpsons-inspired takes on Kim and Kanye, Amal and George Clooney, and Kate Middleton and the Queen, it’s a statement about the habit we have of making our celebrities larger than life — and taking it so far that we turn them into literal cartoon characters. It’s especially bizarre in the case of the British Royal Family; I’ve long held a theory that because we don’t have royalty in the U.S., we treat our celebrities as royalty and treat actual royals as celebrities. Add to that the whole Simpsons veneer, and, well… it really points how weird that is.

The Simpsonization of the Kim Kardashian Paper Mag cover has a similar effect; given that a good deal of the conversation surrounding it has focused on whether Kim’s ass is real in it, it’s certainly saying something to make it into something so obviously fictional. As HuffPo UK notes, it’s possible that Palombo “might need to get back to the drawing board sooner than he thinks as even more pics have appeared, and this time they’re even more revealing.” Anyone else curious to see how he’d take on Kim’s full frontal shots?

Head on over to Palombo’s website to see more of his work.