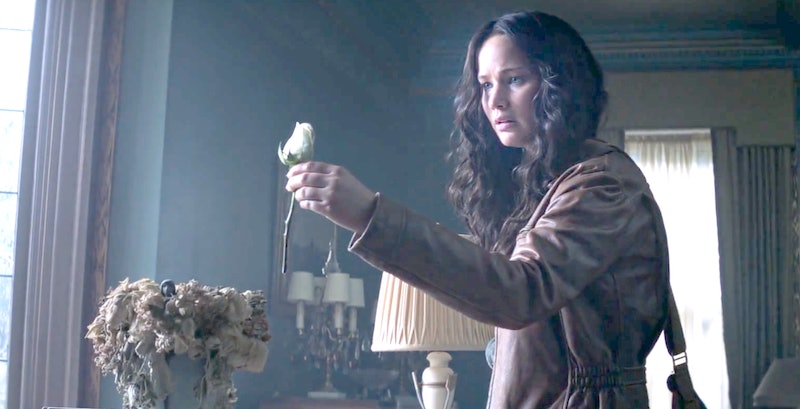 The first time I read Mockingjay, I was sitting in a bookstore waiting for my long distance boyfriend to arrive at the bus stop just outside. I was so engrossed that after literally weeks of not seeing said boyfriend I completely missed several calls and texts that he'd arrived early, and when he eventually found me, still sitting half-crouched in the young adult section of Barnes and Noble about a hundred pages in, he said, "You know what, if it had been any other book, I might have been mad." We proceeded to spend the entire weekend swapping the book back and forth and basically ignoring each other for the sake of Katniss. Two midnight releases of Hunger Games movies later, I think it's safe to say that I am an expert at emotionally preparing for them (even if I'm still not the best with LDRs).

But now that Mockingjay's November 21st release draws nearer and nearer, it is more pertinent than ever that we don't let our guard down. We're all a little older since the last movies came out, perhaps a little more complacent now that our life priorities have shifted. But that doesn't mean that we're going to be able to hold our own against the other fangirls and fanboys if we go in there unprepared. So please, for your safety and the safety of everyone around you, make sure you do all of these things before the Mockingjay: Part 1 premiere:

Speculate Wildly About Where They're Going To Cut The Movie Off

Two-part movies are a blessing and a curse: I'm excited that the fun won't end after this, but every time I've endured a two-part movie, the credits rolling is like the emotional equivalent of getting shanked. I have a few ideas of where they're going to leave us hanging and they're all too terrible to say out loud.

You might as well get some of it out of your system while you're alone.

The boy with the bread will be disappointed with your life choices, but you're gonna need to build up your strength to survive these emotions.

Slobber Over Elizabeth Banks And How Flawless She Is

Effie might be getting a much-needed make-under this time around, but Banks's own inner Effie still had it going on.

Yes, I am a person who aggressively wears costumes for movies, and this year I am torn. Do I go as a rebel, or do I wear all white and pretend to be a brainwashed Capital zombie? I'm thinking "rebel" only because I don't want my white clothes to be stained with my tears.

This is happening at some point and I cannot know until it does exactly how I'm going to react, but I'm guessing it's not PG-rated.

I know, I know, this isn't Twilight. But this is your last chance to firmly plant yourself as Team Peeta, Team Gale, or Team Katniss (in which she chooses neither). I, for one, have always been team Peeta, partially because Peeta is the bomb-diggity but also because their 'ship name is Peeniss and I have the maturity of a 13-year-old boy.

Pray That Liam Hemsworth's Beard Does Not Have A Starring Role

What are you hiding in there, Liam?

Real mascara is a rookie mistake.

If Effie doesn't say "mahogany" at least once in either Part 1 or Part 2, I am straight up asking for my money back.

IF WE BURN...YOU BURN WITH US.

Lorde was in charge of curating what is promising to be a kick-ass soundtrack, and even though it won't come out officially until November 17th, you can already listen to Lorde's song "Yellow Flicker Beat."

Pee Beforehand, For The Love Of God

Do you know what was more intense than the Hunger Games premiere? The Hunger Games of the public women's restrooms at AMC theaters. About five minutes before the movie, we lost all pretense of civility and flooded the men's room.

Otherwise you're going to end up sandwiched between two strangers whose eardrums weren't prepared for you to scream, "PEEEEETA NOOOOOO!" at the top of your lungs. Multiple times.

Prepare To Repeat All Of The Above Next Year

It's not over 'til the Mockingjay: Part 2 sings.