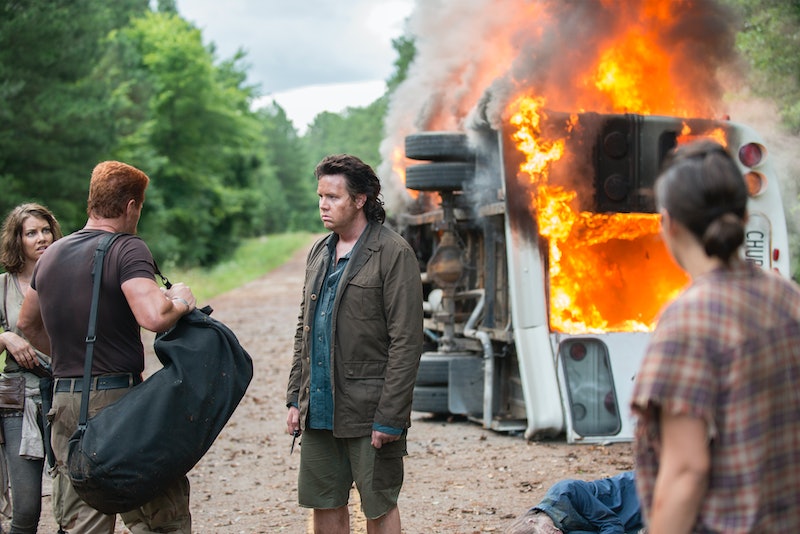 Here's what we learned on the last episode of The Walking Dead: Eugene is not a scientist, he doesn't have a cure for the zombie outbreak like he promised, and he watches Abraham and Rosita bang. In a nutshell, Eugene from The Walking Dead is just an a*shole with a mullet. Now that their livelihood doesn’t solely depend on getting to the capital, where are Abraham and the group heading? I'm pretty sure that they are following the comics and are about to find the Alexandria Safe Zone considering they are probably in Virginia at this point. By the way if anyone in Rick’s group dies at the hands of Dawn Lerner (a.k.a. Satan), I am going to blame Eugene for making everyone take him away.

Unfortunately we won't find out in this week's episode what’s next for the D.C.-bound group. According to the episode guide, this week will focus on Daryl and Carol’s attempt to rescue Beth from the hospital. On IMDB, it says that Abraham, Maggie, Glenn and the rest of them only have a credit on the cast, so they won’t be in it at all. With only a few episodes left, there is a slight chance that we will have to wait till 2015 to get an answer.

I would bet lots of money on the fact that they are going to the Alexandria Safe Zone in the next couple episodes. In October, Scott Gimple hinted that it was coming, but refused to reveal when. "[Alexandria Safe Zone] is entirely possible," he told Entertainment Weekly. "You know I wouldn’t say one way or the other. But I will say, that’s a very big point in the book. You know, I don’t think anyone who reads the comics will be surprised that we eventually get there. But whether it’s this season or not… I shan’t confirm anything, but it’s possible, I suppose." That is possibly the most annoying answer ever, but what are their other options at this point?

They could continue toward D.C. I mean is there ever really a bad time to see the nation's capital? I am still interested in learning why Eugene thought D.C. of all places would be a safe place to hide out. You know a million tourist zombies are there hanging out at the Lincoln memorial, so I want an explanation of why that would be considered a safe hiding spot.

Their second option if Alexandria isn't coming up is to head back toward the church to find Rick and the rest of the group, which at this point seems kind of fruitless. Personally, I would be traveling toward a beach or a boat because I bet zombies can't swim very well and, if I'm in the zombie apocalypse, I might as well be working on my tan.

More like this
‘Squid Game’ Creator Hwang Dong-Hyuk Just Dropped A Major Season 2 Tease
By Brian Anthony Hernandez and Bustle Editors
Nicola Coughlan Shared A Lady Whistledown Excerpt From ‘Bridgerton’ Season 3
By Grace Wehniainen, Alyssa Lapid and Sam Ramsden
A New 'And Just Like That' Table Read Pic Confirms A Key Character's Return
By Jack Irvin and Grace Wehniainen
You’ll Definitely Recognise Both Of Ty Tennant’s Parents
By Maxine Harrison
Get Even More From Bustle — Sign Up For The Newsletter