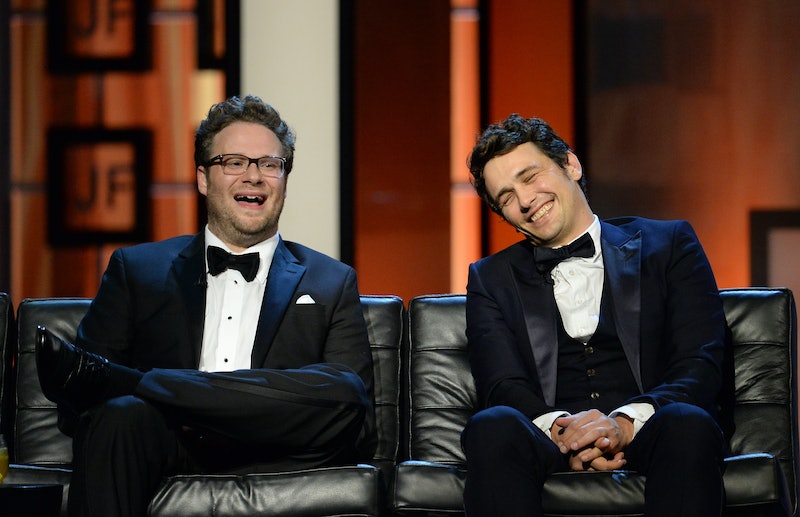 Seeing James Franco and Seth Rogen in the buff together is nothing new. There was the epic recreation of Kimye's "Bound 2" music video in which Rogen was the erotic Kim to Franco's swaggerriffic Kanye. Then the Hollywood BFFs popped out of a cake in full burlesque style for Jimmy Fallon's birthday. And now with their appearance on Naked and Afraid it seems like James Franco and Seth Rogen are more comfortable in their birthday suits together than they are in tuxes. I can't say I blame them. To promote their upcoming film The Interview, which premiers on Christmas day, Rogen and Franco disrobed and met in the wilderness for Discovery's risque reality series. Because nothing says Christmas like hairy man butt.

A sneak-peek of the show premiered on Thursday's Good Morning America. in the clip, the two lovingly make jokes about how they'd rather be naked in the woods with anyone else...but then end in a warm, naked, and very likely sweaty embrace. At this point, seeing James Franco and Seth Rogen naked together is as commonplace as seeing them make movies that are rampant with penis jokes and marijuana. You just come to expect it nowadays.

These two are most certainly the poster boys for nudist friendships, and it's guaranteed that their episode of Naked and Afraid will be as hilarious as it will be...chapped.

The clip starts at the half-way point: