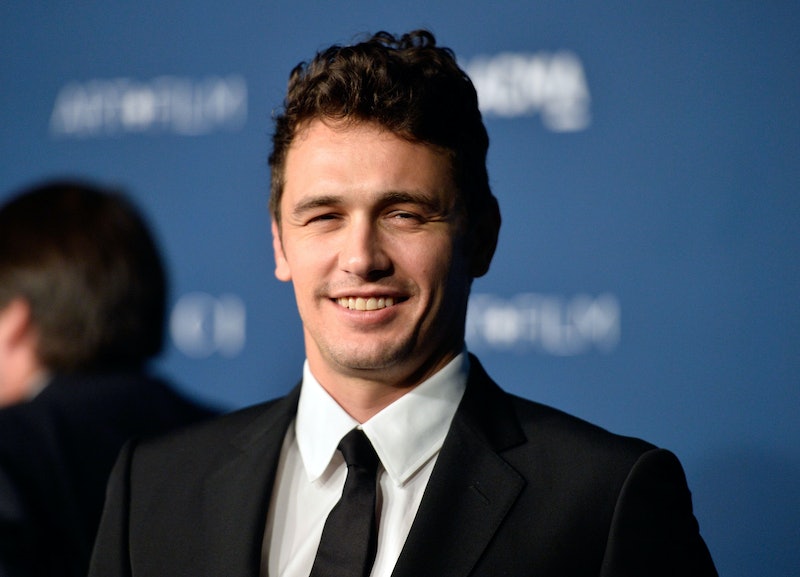 James Franco is a man of many talents. A writer, an artist, a mediocre Oscar host, and the occasional parody-er... parodyist.. par — he's really good at parodying things. Like the hilarious scene-for-scene reenactment of Kanye West's "Bound 2" music video he starred in opposite Seth Rogen. The original vid featured Kanye and a topless Kim Kardashian riding into the sunset, cut between Kanye rocking a tie-dye tee and singing into the camera. Rogen plays Kardashian, without a shirt, straddling Franco as Kanye while he lip-raps the original lyrics.

But this hilarious rendition, while it will surely elicit a reaction from Yeezus himself, is a whole lot of man-on-man action, complete with Rogen tossing his hair in the wind, and Franco dancing in front of a green screen. But this isn't the first awesome parody Franco has composed. To refresh your memory, let's watch the "Bound 3" music video again (because how many times is too many, really?). Then take a look at Franco's other top hits, from a pseudo Justin Bobby to portraying another chart-topping singer, Justin Bieber.

What if Kimye was actually the two make stars of Pineapple Express?

Himself, a la Pineapple Express

Remember when James Franco hosted the Oscars with Anne Hathaway and everybody hated it? ...Too soon? Well there were a few memorable funny moments during their hosting gig, notably this short starring Franco and Rogen in their Pineapple Express roles.

Himself, a la Gucci Advertisement

Because if James Franco doesn't know how to pronounce "Gucci," the rest of us are all gonna turn out fine.

More like this
Photos Of The 'Elvis' Cast vs. Their IRL Counterparts Will Have You All Shook Up
By Grace Wehniainen
Taylor Swift's “Carolina” Theme For 'Where The Crawdads Sing' Soundtrack Is Here
By Jake Viswanath
What Is Elvis Presley’s Net Worth? How The King Earned & Spent His Fortune
By Grace Wehniainen
The Tragic Reason Elvis Never Toured The UK
By Sam Ramsden
Get Even More From Bustle — Sign Up For The Newsletter