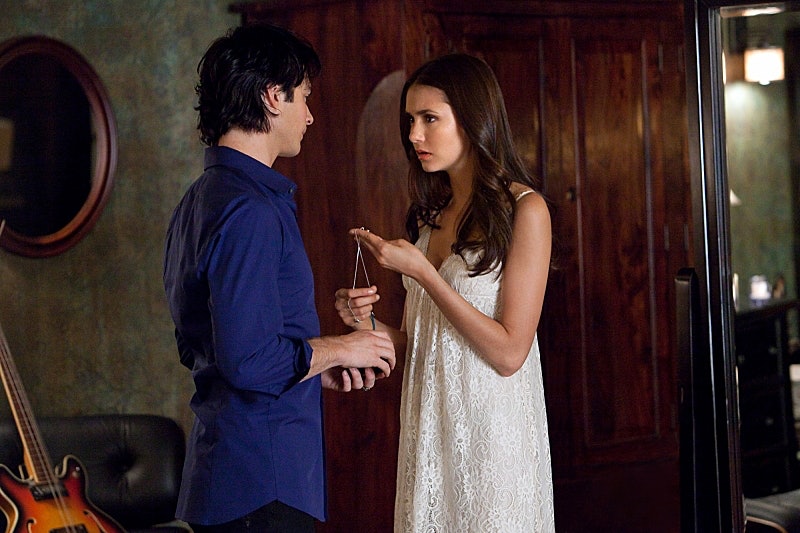 Sometimes The Vampire Diaries makes me question my sanity. Does anyone else have dreams that Julie Plec is standing over them while stabbing them in the heart and laughing like a maniac? That can't just be me, right? RIGHT??? Well, that's exactly what TVD Season 6 is forcing me to do with every episode they keep Delena apart. I mean, Elena erased all of her memories of Damon on TVD earlier this season and now she can't get them back. AND to make matters worse, Elena's moving on and dating someone new. It's almost as if the Vampire Diaries' writers room and execs got together and said, "What can we do that would destroy Delena in Season 6?" and then they did it. And it hurts me. It hurts so much.

Can Delena get back together? It doesn't seem likely and if spoilers and previews for Thursday night's episode, "Do You Remember The First Time?" are any indication, Delena might be over for good. Because The Vampire Diaries is doing its absolute best to make sure that everyone's favorite 'ship — the 'ship that's driven the series for almost two seasons — is totally and completely kaput. Do you think I'm being dramatic? Because I can show you dramatic — it was the final scene from last Thursday's episode of TVD (you know, when Elena and Damon saw each other for the first time since his return).

Here's the deal, Delena and TVD fans, Season 6 is going well out of its way to ruin this 'ship for us. I'm not sure if a part of Julie Plec's assertion that she'd hit the reset button with this season is that she plans to reset all of TVD's 'ships as well, but, either way, it really sucks. The sixth season of The CW's veteran vampire drama started with Damon's death and Damon's memory turning Elena into a raging vampire drug addict. Which, in hindsight, I should've taken much more to heart than I did, because this was TVD's way of showing us exactly how unhealthy Delena's relationship actually is for everyone involved. Elena and Damon love each other so deeply, so madly, so completely that being apart could quite literally kill them. And that's exactly what we saw at the beginning of Season 6 — Elena's constant need to see Damon and be in his presence turned her into an erratic drug addict on the verge of ruining her life. It was bad, it was really, really bad.

But, to be honest, that didn't deter me. Elena felt lost without her rock and, while I don't agree with how she chose to fix it, it was obvious that her despair drove her to this dark place. Which brings us to TVD's second attempt at sinking the Delena 'ship — Elena deciding to have her Delena memories compelled away and then deciding, after Stefan called her out for it, that she STILL didn't want them back. Personally, for a second, this made me believe that Damon is way too good for Elena. She's clearly weak, she clearly didn't believe that he'd come back for her, and she didn't trust that their love could transcend the supernatural boundaries. That's enough for me to want Elena to spend the rest of eternity alone. And now, here we are after last Thursday's episode, with Elena not being able to get her memories back AT ALL because Alaric is a human now. Was this TVD's way of killing all of our hope that Damon and Elena could get back together and be in that relationship again?

To add insult to injury, TVD's also started hinting at a romance between Elena and that guy from her med school classes. OK, fine, he has a name — Liam — but I refuse to acknowledge it because I know that he's just going to become another casualty in the Delena love story. Does any self-respecting TVD fan actually believe that Elena and this new guy are going to work? She's a vampire with a vampire soul mate, no human is going to change that. But this new relationship for Elena is just another way for TVD to frustrate Delena fans to the point that we want to give up. No one wants to watch one half of their 'ship looking for love elsewhere — especially when she'd totally still be in love with Damon if she hadn't been so weak as to have her memories erased.

But, again, things are going to get so much worse for Delena fans going forward because the promo and spoilers for Thursday night's episode definitely hints that Elena isn't going to fall back in love with Damon without her memories. It also revealed that Elena's going to parade around this new guy as if he's got a chance. (Give me a break.) And Damon's "going to take matters into his own hands" because he won't be having any of that. Would Damon get desperate enough to kill Liam to keep Elena on the right track? We've seen Damon kill before and we've seen him turn off his humanity switch. It's entirely possible that the next phase of crushing Delena 'shipper's hearts is to turn Damon into the monster Elena believes him to be.

If TVD keeps this up, they might actually succeed in crushing all of the Delena 'shippers a massive, teary-eyed pulp. How can we support two people who have zero ability to handle their emotions or to cope with their grief? And we definitely can't support to people whose separation is threatening to destroy them. Nice job, Julie Plec — if you wanted a "reset," it seems like you've got one. And it's going to be a hell of a job getting back the magic you left behind.