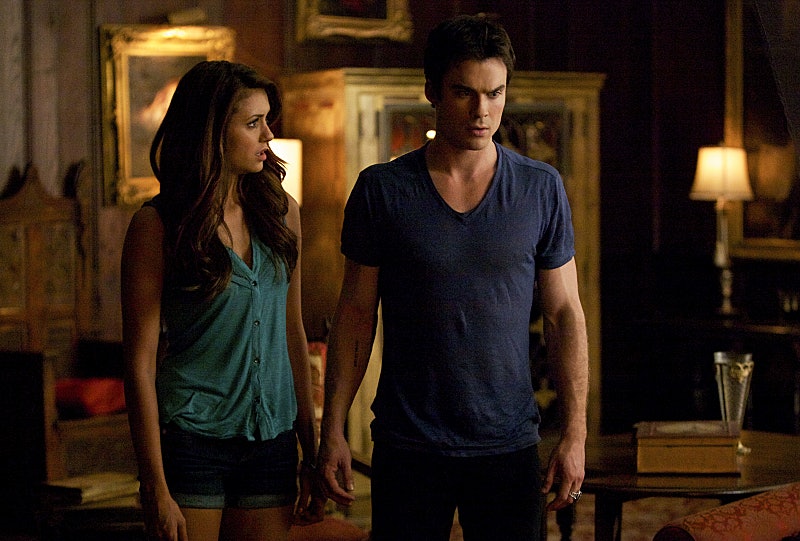 There are bad days and then there are bad days — the latter of which our favorite Vampire Diaries characters seem to have in spades as of late. Last week’s TVD episode “The More You Ignore Me, The Closer I Get” gave us the Delena reunion we’d all been waiting for ever since Damon faded away into oblivion (or rather 1994) during the show’s Season 5 finale. There’s just one tiny, little hiccup: Elena can’t get her memories of Damon back now that Alaric is human. (You’re a cruel, cruel woman, Julie Plec.) Obviously, we all should’ve seen this plot twist coming as soon as Elena vocalized to Caroline that she wanted those memories restored. That, by itself, should’ve set off major warning signals.

But alas… I dared to hope for the best. Sure, there’s a big part of me that’s kind of excited to see Damon and Elena fall in love all over again. However, the realization that Elena may never remember all of those amazing times she's shared with Damon feels like a stake right through the heart. I mean… those are some good memories, my friends. I’m talking primo quality. So much so that I’m having a difficult time believing that they're permanently lost, especially when these guys just so happen to have the most powerful supernatural family on speed dial. You know where I’m going with this, right?

Who ya gonna call? The Originals!

That’s right, I’m proposing another TVD and Originals crossover episode — the way it should’ve been done before (aka doppelgänger-free). Just hear me out… Esther was able to resurrect Klaus’ real father and that dude’s been dead for thousands of years. So I find it hard to believe that a little bit of compulsion would stump her. After all, she was able to force Elijah to remember certain parts of his past, like, say, the fact that he was the one who killed his beloved Tatia (though it’s unclear if those visions were truly his own or something Esther concocted). But regardless, this Original witch seems highly skilled in the lost memory department, so I’m sure she could recover Elena’s memories for her in no time.

Plus, didn’t Davina manage to break the compulsion Klaus had over Cami and force her to remember everything he had erased? It was painful, but effective — and something I bet Elena would be more than willing to endure if it meant being able to recall her love for Damon. And if Klaus and Caroline just happened to cross paths while all of this was transpiring, then so be it. (Hey, who am I to get in the way of a Klaroline reunion?)

OK, so fine, I may have ulterior motives for wanting another crossover to happen, but that doesn't change the fact that my logic still makes total sense. A quick road trip to New Orleans would cure all of Delena's problems, mark my words. Or better yet, maybe the Mikaelsons should come to Mystic Falls. I'd be curious to see if they would be just as affected by the barrier as all other supernatural creatures appear to be.

Speaking of which, why has no one considered having Elena briefly cross over the barrier to Mystic Falls? It's a magic-free zone, right? So wouldn't that undo Alaric's compulsion? This tactic has worked for other people on the show, so logically speaking it should prove to be just as effective for Elena. Sure, she'd start to drown the minute she crossed over the invisible line, but she wouldn't have to stay over there forever. Just long enough for the compulsion to wear off… which hopefully wouldn't be any longer than a couple minutes.

But either way, I'd say it's probably in everyone's best interest to keep Klaus & Co. appraised of the situation. Because if there's one thing that family is known for, it's getting results. That and knowing how to wear a suit, of course.