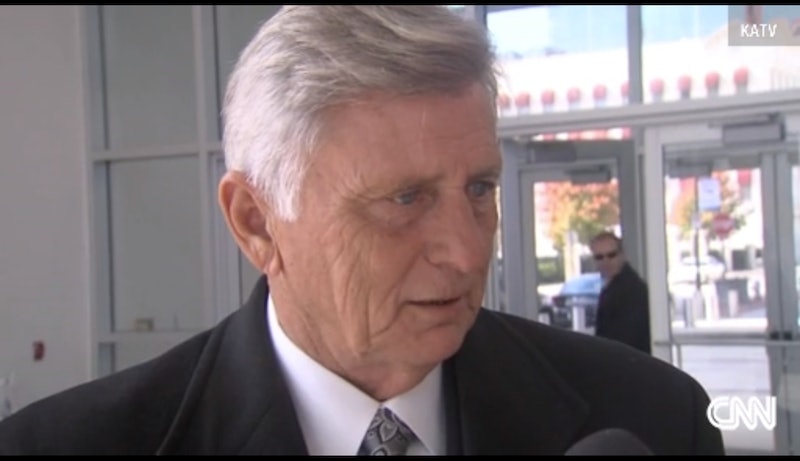 In 2003, Mike Beebe's son was charged with possession of a marijuana, a controlled substance, with intent to deliver. Now, more than a decade later, the Arkansas governor will pardon his son for the felony drug charge, which at the time included a fine and three years of supervised probation.

According to CNN, Matt DeCample, the Democratic governor's spokesman, said the pardon will most likely be granted within the next few weeks. DeCample also explained what goes into the approval of a pardon:

For any pardons the governor does the person has to have finished all terms of their sentence ... and then had a period of time where they've shown they have straightened their lives out.

Now 34, the governor's son, Kyle Beebe, wrote a rather lengthy and contrite letter that he submitted with his pardon application, pleading "Mr. Governor" for a second chance at life,

At the time of my arrest I was living in a fantasy world, not reality. I was young and dumb. At that time in my life I felt like I was missing something and I tried to fill that emptiness by selling drugs.

Governor Beebe, whose tenure ends in January 2015, had said as state attorney at the time that his son broke the law and had to be treated like everyone else — "no better, worse." 11 years later, the governor told Channel 7 News his son has repented and grown up since, and added that the pardon came so late simply because Kyle didn't ask for it sooner:

Kids when they’re young do stupid stuff. He was no different. Especially young people with drugs if they’ve straightened up, to get their life back on track and have a second chance, so this is no different. It’s different because it’s my son.

A spokesperson for the Arkansas parole board told local channel KATV that Kyle being the son of the Arkansas governor played no part in the board's decision:

I can tell you that [Kyle] Beebe did not receive any special treatment by the Board while his application was under consideration.

Beebe told KATV that he's given out over 700 pardons during his time as governor, mostly for non-violent offenders. According to his website, those granted pardon may have all their rights restored, including the right to bear arms.

Marijuana remains illegal in the southern state, but just Wednesday, a pot and hemp legalization constitutional amendment initiative won ballot title approval by Attorney General Dustin McDaniel. The wording of the petition, sponsored by Arkansas CALM (Citizens’ Alliance for the Legalization of Marijuana) still has to be approved by the Arkansas Secretary of State's office.

More like this
Michigan’s Governor Is “Going To Fight Like Hell” To Protect Abortion Access
By Andrea Zelinski
'The Spy Who Died Twice' Is Based On A Major British Scandal
By El Hunt
Where Is Dr. Cline Now?
By Morgan Leigh Davies
How To Fight For Reproductive Rights, Based On How Much Time You Have
By Courtney Young
Get Even More From Bustle — Sign Up For The Newsletter