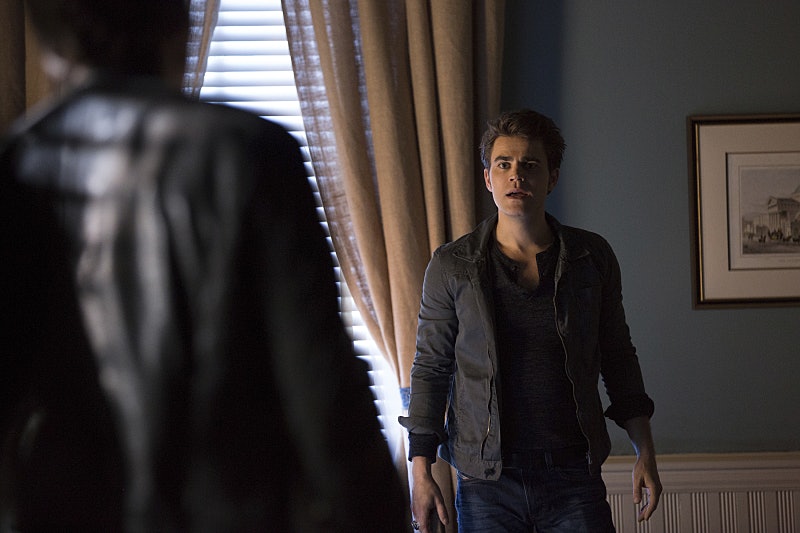 As it turns out, no one is immune to holiday drama… not even vampires. The CW has released photos of The Vampire Diaries ' upcoming Thanksgiving episode "Fade Into You," which appear to be filled with all the typical holiday requirements: fighting, cooking, tons of side-eye, etc. You know, the basics. And while we all know that our favorite Mystic Falls gang have problems that stem far beyond the reaches of a mere cooking faux pas, I can't help but love the idea that they're attempting something as normal as a Thanksgiving dinner. Or rather, a Friendsgiving dinner in this case. (Yeah, I'm sure nothing is going to go wrong with this plan. Nope, not at all.)

Either way, though, it's a completely adorable idea and one that I am so on board with. So much so that I thought it would be fun to envision what's going on in some of these images. I mean, clearly there's more to all of this than meets the eye, but that won't stop me from convincing myself that these group of friends are simply taking a day off from all the supernatural drama and experiencing all the trials and tribulations that come with good old-fashioned holiday drama. Because deep down, these supernatural beings are just like us! And these pictures prove it.

They Get Frustrated With Their Loved Ones

It's hard to tell since we've got a few blondes running around these days, but that's actually Caroline who Elena is giving some serious side-eye to. Why exactly? Who knows, but I'm hoping it has something to do with the fact that it doesn't look like Caroline remembered to bring a dish to pass. (Sigh.) There's always someone. Either that or Elena just got the short end of the wishbone. (She has no Damon memories, Caroline! Give the poor girl something!)

Can't you just picture Damon saying, "I have to put my hand where on this turkey?" LOL. Good times, good times. But clearly that's what they're looking at, right? Those cards are full of old Salvatore family recipes and not some incantation and/or clue to yet another dangerous mission. (Denial: 1, Reality: 0)

They Put Up With Unwanted Guests

Obviously, it's great that Jo saved Alaric's life because if Matt Davis had been killed off again I probably would still be screaming at my TV. However, it's technically now her fault that Elena can't remember her relationship with Damon, which means basically, she's the reason Delena isn't in full swing right now. So yeah, I'm sure tensions are going to run a little high with her around.

But awkwardness comes with the holiday territory. We've all had to put up with that one relative we can't stand since they're still part of the family and therefore just have to deal. (For all you Parks and Rec fans out there, Jo is pretty much the Jerry of the group right now.) But hey, at least she brought food! (Though in this crowd perhaps one or two blood bags would've been better.)

I'd be amiss if I didn't include one of the most important aspects of this particular day: the food. Glorious, high-calorie, delicious food. It's comforting to know that even vampires and witches can't resist a good basted turkey every once in a while. Now if you'll excuse me, I'm officially starving. BRB.