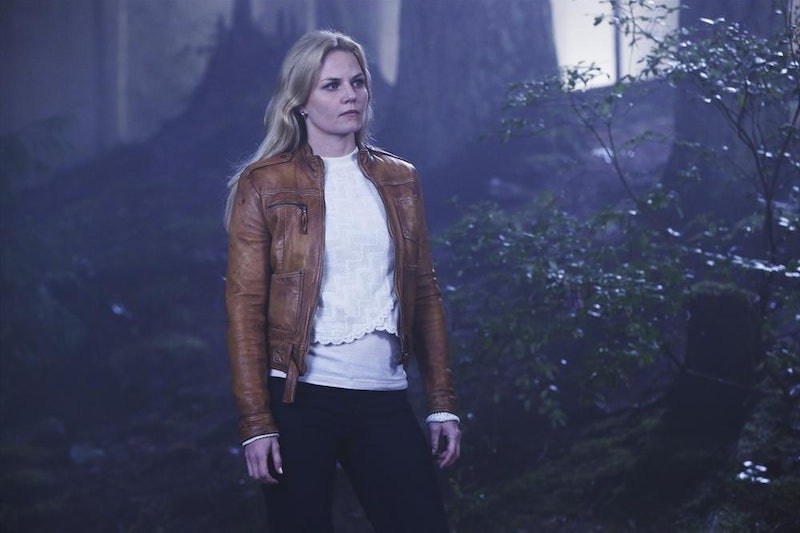 Sunday night's episode of Once Upon A Time will bring us a super-sized two hour extravaganza, where hopefully we'll learn the answer to one — maybe two — of the show's 5,000 unanswered questions. We're finally getting to the bottom of Ingrid's agenda, and what she really wants with the town of Storybrooke, and more importantly, Emma and Elsa. She's already got ties to both of them, being related to one, and the former foster mother of the other. But the thing about her time with little Emma is that we still know next to nothing about it. How long were they together? Why did Emma leave Ingrid's care? And most importantly, why can't Emma remember Ingrid? There's something fishy going on with that story, and hopefully the two-hour event will give us some answers. It's time to learn why Ingrid wiped Emma's memories on Once Upon A Time.

Whatever the real reason turns out to be, it'll have something to do with magic. It has to have something to do with magic. In the past, Ingrid was fearful of her magic; in the present, Ingrid knows that she has pretty powerful magic. Emma, though learning, is still struggling with her magic, but she has gotten a lot more control over her powers this past season. Ignoring the giant gaping plot hole of, "how did Ingrid get to the real world, anyway?" I'm more concerned with why she wiped all of Emma's memories — what went down between the two of them that Emma shouldn't remember?

INGRID REALIZED THAT EMMA HAD POWERS

That huge void of answers — all regarding how Ingrid got over here in the first place — might either leave her super psyched about her icy powers, or terrified of them. In last week's episode we saw that she turned her sister, Helga, to ice cubes, killing her (we assume). It's possible that Ingrid escapes to the real world, and decides to forget all about her powers. Then, a little Emma Swan shows up in her foster care, and Emma shows the same early warning signs of strong magic that Ingrid once had herself. Not wanting to get mixed up in that again, Ingrid wipes her memories of any magical idea, and sends Emma to a different foster home.

INGRID HELPED EMMA WITH HER POWERS & IT WAS GOOD

Or, Ingrid manages to get to the real world and finds Emma. Ingrid, though still a little hesitant about her powers and their magical range, is learning to accept them. That's when Emma comes along, and in trying to make good with her past mistakes, Ingrid tries helping Emma hone in on her powers. This might be the first inkling of Ingrid realizing how powerful she can be, as she watches Emma perform simple magic. Maybe she starts dreaming of a foster mother and foster daughter traveling magic show. But then for reasons unknown, her foster service is no longer needed for any of the children — Emma included — and all of them are sent in different directions. The last thing Ingrid wants is Emma telling anyone else about the magic in the house, so Ingrid wipes her memories, and all of their happy times together.

INGRID HELPED EMMA WITH HER POWERS & IT WAS BAD

Do we know how powerful Emma's magic is? They seem to be on par with Regina (though her magic is often the bad, evil kind of magic), but is there any chance that Emma could in fact be more powerful than Ingrid? If the two of them met way back when, Ingrid could have noticed that, and never wanted the opportunity for Emma to overcome her, and defeat her. By erasing all of her memories of their time together, Emma is none the wiser as to the fact that there's another powerful sorcerer out there in the world.

HER MISSING MEMORIES HAVE SOMETHING TO DO WITH THAT PROPHECY, WHICH IS WEIRD

So if Ingrid met Emma way back when, and Ingrid knew that there was some prophecy out there about Emma taking over as her long lost sister, Helga, why did the two part ways? Did Ingrid wipe Emma's memories so later on in life, they would meet and Emma would think it's a great idea to join up with the Snow Queen to rule over Storybrooke? That prophecy is weird, guys. I can see a scenario where Ingrid knew of the prophecy when Emma was young, but when Emma has to leave her foster care, her memories leave, too. Because of the prophecy. Like Ingrid was saving it as a big surprise for her later on in life. Like, "Surprise, Savior! We're taking over the world!"

Or maybe, just maybe, little Emma knew of her magic. Knew of Ingrid's magic. Knew of the prophecy that would happen later on in life, and knew of her role as the savior and asked for her memories to be wiped clean. There is that slim chance that this wasn't Ingrid's doing at all, but Emma's instance. Either way, we're going to learn a little bit more about little Emma's childhood.