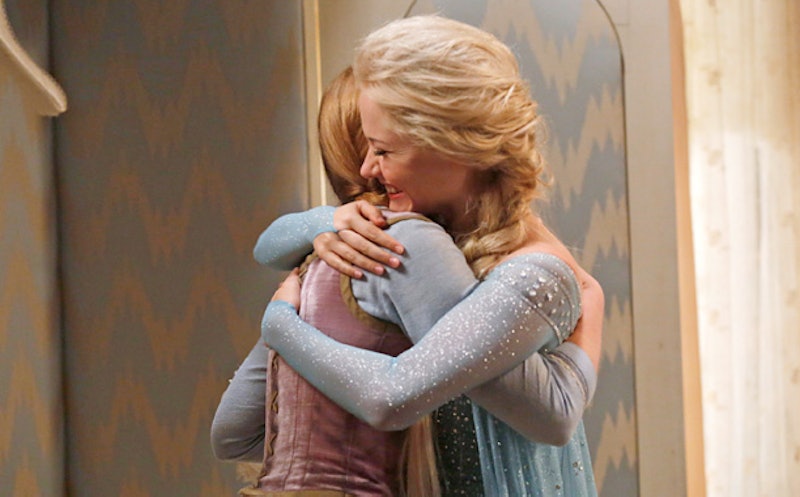 Villains lie. It's a concept I've grown quite accustomed to from the moment I watched my first Disney movie: You can never trust the bad guy. But that didn't stop last week's Once Upon a Time episode "The Snow Queen" from shredding that steadfast theory into tiny little snowflakes. The Snow Queen's backstory proved that she's been telling the truth all along. After accidentally killing her sister Helga, Elsa and Anna's mother, Gerda, trapped Ingrid inside Rumpel's magical urn. It was a harsh reality for viewers to face. You may have even found yourself starting to unthaw towards the Snow Queen. (Gasp!) Which got me thinking… if she wasn't lying about that, then perhaps she was also telling the truth when she said Anna trapped Elsa in the urn.

I mean… that's crazy talk, right? Anna would never do something like that to Elsa, her sister whom she loves more than anyone else. And yet… I find myself growing less and less sure about the situation. On the one hand, Ingrid is living proof that royal sisterly bonds are no guarantee that one of you won't eventually entrap the other into an inanimate object, genie-style. But on the other hand, it's not like betrayal is genetic. Just because Elsa and Anna's mother betrayed her sibling with magical powers doesn't mean they too are doomed to repeat that same fate.

See, this is why villains are supposed to lie. Otherwise, it completely defies the laws of fairytales. I hope you're happy, OUAT writers, because I'm thoroughly stressed out here!

So let's just say for a moment that Anna, in fact, was the one to send Elsa into an alternate urn-iverse. Is there any instance where that would be considered OK? (Well, apart from her purposefully going on an ice-cold murder spree or anything.) Would there be any acceptable excuse for Anna's actions? Sunday night's promo for OUAT 's 2-hour episode "Smash the Mirror" promises an "ice-cold betrayal" as we see Anna throw the necklace Elsa gave her into the fire. That's cold, girl. (Well, technically it's hot, but you know what I mean.) However, it remains unclear who exactly is doing the betraying. I learned long ago never to put too much stock into these promo clips since, thanks to editing trickery, they can be very misleading.

But even the synopsis indicates that the Snow Queen is creating tension between these two normally close sisters. Will this lead to Anna eventually snapping and deciding to open up the urn in the heat of the moment? Or perhaps she attempts to trap the Snow Queen, but accidentally places Elsa in there instead. Accidents do happen, after all.

Look, I'm not saying we should start painting Anna as the villain instead of the Snow Queen, who is definitely still not innocent by even a long shot. Anna may have had a good reason for what she (possibly) did. Unlike mommy dearest, who in my opinion, jumped the urn gun…

And, of course, there's still the chance that Anna didn't do it. Just because the Snow Queen was honest about one particular moment in her life doesn't necessarily mean she's incapable of telling a lie. (One truth does not a reliable person make.) I'm merely suggesting that we keep our options open for now. Because something tells me this whole story arc is about to snowball in ways we never expected. I only hope Anna and Elsa's relationship can survive it.