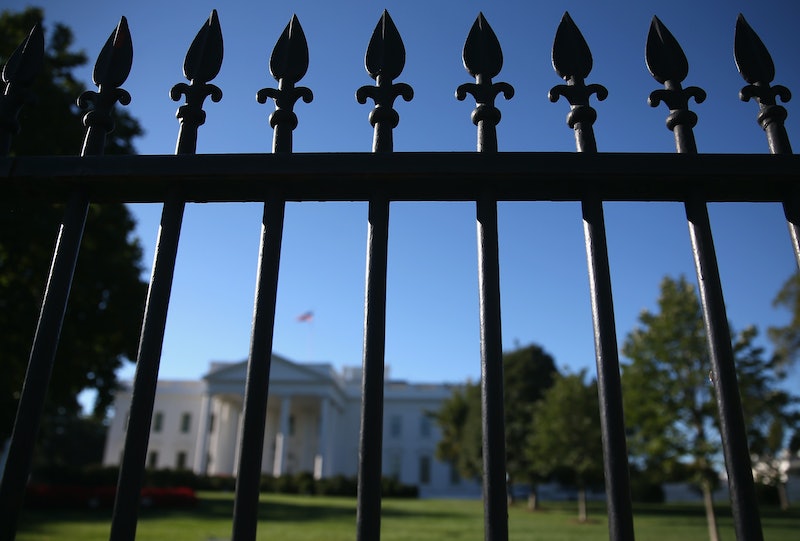 Hey, remember that guy who jumped the White House fence? No, not the teenager, or the one who was caught by the dogs. I'm talking about the really embarrassing (and, let's face it, a little unnerving) fence-jumper Omar Gonzalez, who made it all the way into the East Room carrying a knife. Well, according to a New York Times report published Friday, the fence-jumper got into White House because the Secret Service messed up, big-time. And the Department of Homeland Security is not happy.

According to a review of the September 19 incident by the Department of Homeland Security, the entire incident was a shambles. Most of the officers didn't even notice Gonzalez when he first climbed over the fence to get in; the radios failed to work and, later, Gonzalez wasn't followed when he made it to the building because the officer thought the North Portico doors — you know, the big, impressive ones that you see in the movies — were locked. (They weren't.) In total, the review cited at least 12 major mistakes the Secret Service has made.

Let's start with the fact that when Gonzalez scaled the fence, there was supposed to be a Secret Service member standing guard on the North Lawn with an attack dog. Except, he wasn't. He was chilling in his van, talking on his (personal) cellphone, having taken out his radio earpiece and left his second radio in his locker. So Gonzalez casually made it over the fence and kept on walking towards the White House, with most of the Secret Service crew none the wiser.

When Gonzalez was finally spotted by a different officer who began running towards him, the initial officer sprang to action and immediately gave his dog the attack command. Except, the dog had no idea what was going on, and "may not have seen” the intruder at all. Gonzalez, meanwhile, kept making his way towards the bushes — bushes which the Secret Service apparently thought would halt the crazy person.

As the review summary explains:

By the time the officer exited his vehicle and began yelling commands at Gonzalez, Gonzalez had nearly arrived at the bushes ...The Canine Officer mistakenly thought that the bushes would serve as a natural barrier and was surprised that Gonzales was able to enter and pass through them.

Only one officer followed him in there, but he quickly lost him. (They were all apparently "surprised that Gonzalez was able to get through" because the bushes were so thick.) When they saw him again, he was at the North Portico doors. Thinking the intruder was trapped because the doors were surely locked, the officer stationed by the doors "stayed out of the way" — turns out, they weren't. So Gonzales then just casually walked into THE WHITE HOUSE. At which point another officer, stationed inside, tried to tackle the intruder. And failed, epically. Says the summary:

After attempting twice to physically take Gonzalez down but failing to do so because of the size disparity between the two, the officer then attempted to draw her baton but accidentally grabbed her flashlight instead.The officer threw down her flashlight, drew her firearm, and continued to give Gonzalez commands that he ignored.

Gonzalez made it all the way into the East Room with his knife before some plainclothes officers managed to get him. It's not surprising though that one legislator is calling the whole thing a "comedy of errors," according to the NYT. You just don't want that kind of comedy near the leader of the free world.

More like this
Where Is Dr. Cline Now?
By Morgan Leigh Davies
What Is Barack Obama’s Net Worth? He Makes *Way* More Now As An Ex-President
By Hugh McIntyre
How The City Healed Five Years On From The Manchester Arena Attack
By Ella Glover
Michigan’s Governor Is “Going To Fight Like Hell” To Protect Abortion Access
By Andrea Zelinski
Get Even More From Bustle — Sign Up For The Newsletter