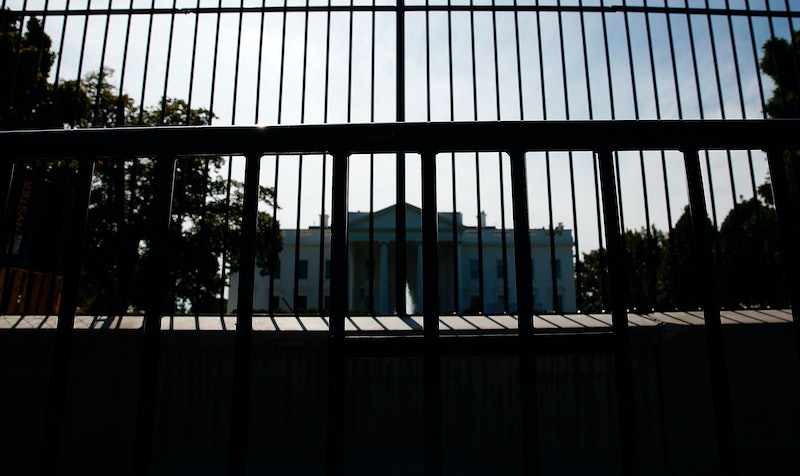 White House fence jumping: The new American past time. On Wednesday night there was another White House security breach, but this time, the fence hopper didn't make it inside the mansion. A Secret Service spokesperson told The Los Angeles Times that the intruder climbed over the north fence line and was caught not by an agent, but by several dogs.

While the intruder made it onto the White House lawn, he reportedly didn't get very far. According to Secret Service officials, the unnamed intruder was "apprehended by one of the K-9 units" just after 7 p.m. The LA Times reports that the fence jumper was taken to the hospital with injuries.

Although the Secret Service is making it sound like the unknown intruder was seized quickly by the dogs and agents, the man apparently had time to attack the Secret Service K-9 unit. News organizations captured footage of the incident, which shows the intruder in the shadows of the White House's North Lawn. In the video, the intruder, wearing a pair of white shorts, can be seen kicking a Secret Service dog as he tries to get away. He then repeatedly punches another dog. Fortunately, the dogs seems to be OK.

Considering the fatal shooting that occurred in downtown Ottawa on Wednesday, White House officials were no doubt shaken up by the most recent fence jumping incident. Reuters reporter Jeff Mason said that the White House was put on lock down for roughly 90 minutes, but the safety measure was lifted around 9 p.m.

This attempted invasion comes just one month after a 42-year-old man jumped the White House fence and made it inside the mansion, overpowering a Secret Service agent before being apprehended in the sprawling East Room. It was initially reported the intruder was seized inside the entrance of the North Portico, but later reveals showed several security mishaps led to the invader's far-reaching breach.

In the wake of the break-in scandal and ensuing Congressional hearing, Secret Service Director Julia Pierson resigned. She told Bloomberg News last month that her departure was in the "best interest of the Secret Service and American public."