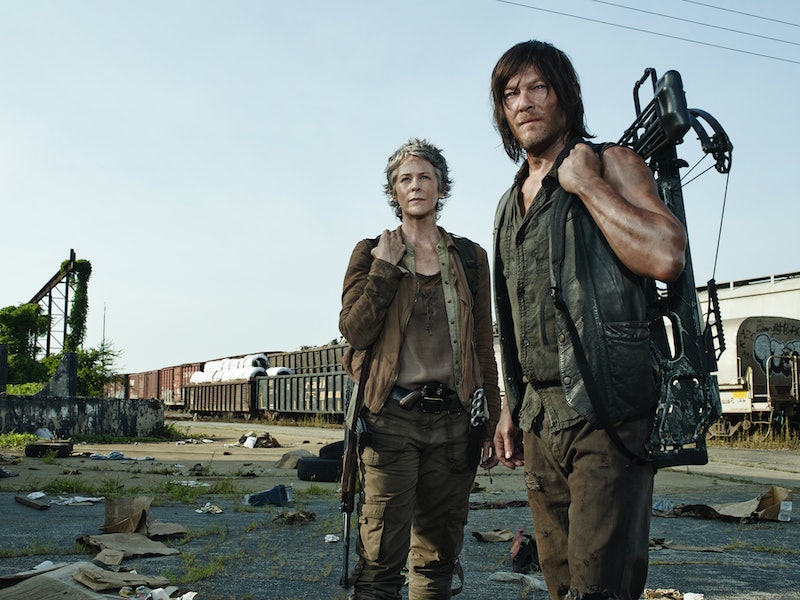 All right, The Walking Dead. Cut it out with the confusing story timelines already. My head is throbbing trying to figure out where the hell everyone is and whether or not they're alive. Seriously, is Beth alive? Is Noah OK? And what about Daryl and Carol? If this season doesn't give me some answers soon, I'm going to explode. And yet if they don't give us answers soon, I'll still keep watching. Here's what we do know. According to the promo for Sunday night's episode "Consumed" that premiered on Talking Dead last week, Carol and Daryl are burning somebody's body. We also know that at some point Carol will be at the hospital from Hell. So will Daryl and Carol meet up with Noah? Their best bet to finding Beth is by meeting up with Noah, and, considering his escape from the hospital, he's somewhere on the outside where Daryl and Carol could find him. So will Daryl and Carol get the luck break of meeting Noah?

One of the current theories is that the body Daryl and Carol are burning is Noah's and that Carol's time at the hospital could be a flash forward. If both of those events occur, that must mean the duo will catch a break and meet Noah, who will tell them where to find Beth… Right?

Here's a theory that combines the two into one: What if Daryl and Carol come across Noah and he's the person Daryl invites out of the woods when he's with Michonne? Maybe Noah comes across Daryl and Carol and then he tells the duo that he'll lead them to where to find Beth. But during the process of heading to the hospital, the now trio come across some kind of danger which leads to Noah being bitten. Daryl and Carol then burn Noah's body, and Carol decides that, in order to find Beth, she should fake injuries to get into the hospital, find out what's going on there and then figure out a way to spring Beth and herself out.

It doesn't seem likely that Daryl and Carol will find and help Beth escape the hospital from Hell without the help of Noah. Despite him leaving Beth behind when he escaped the hospital, there's no way he would just let her die.

However, there is the theory that the Noah from the show is the same as the character from The Walking Dead video game. According to the video game character's description, Daryl has the opportunity to save him or take much needed medical supplies. If Daryl chooses not to save Noah he still lives but tries to kill Daryl — only to die himself. Could Daryl and Carol instead come across Noah only to have some kind of problem arise between the three characters that eventually kills Noah? Hopefully not, as the character is actually likable and deserves to have a more important and engaging storyline on the show.

But if for some reason he does get in the way of Daryl and Carol saving Beth, I'm all for getting rid of him. We'll just have to see how (and if) Daryl and Carol will meet the young Noah and hopefully some timeline questions will be answered thanks to their future likely meeting.