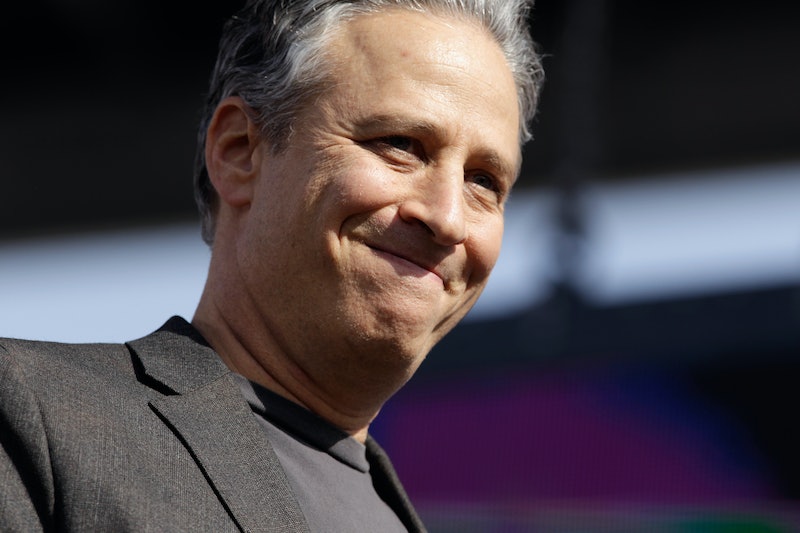 Jon Stewart's new, and unexpectedly serious, movie Rosewater opened in theaters Friday. To celebrate and promote the film, Stewart stopped by the Reddit headquarters to answer some questions. Stewart was very, and almost disappointingly, diplomatic in all of his answers, but he certainly delivered the comedy. Unfortunately for Stewart, no one really asked him about his interesting movie about one of his correspondent's imprisonment in Iran. Reddit seemed more interesting in his celebrity feuds, The Daily Show, and the scent of Stephen Colbert.

Below are some of the highlights. I've edited some of the questions down, mostly because the gushing at the beginning got a little repetitive. We get it, Reddit, you love Jon Stewart.

terattt:What are the biggest pros and cons of being famous for you?RealJonStewart: stares Pro...is you get nicer treatment than you deserve, in many arenas. The con is: people occasionally call you a "fucking scumbag" on the street in front of your family.

Senor_Tucan: Will you and Bill O’rielly just kiss already? The sexual tension is palpable.RealJonStewart: Right? It's really the height differential that keeps us from consummating.

dayofthedead204: Would you ever do another debate with Bill O Reilly? Also, what are your impressions of Bill?RealJonStewart: Uh, I would absolutely. I always enjoyed it. It reminds me of everything thanksgiving i had growing up, where my relatives would come over. And we would always end up screaming and yelling over plates of gravy and cranberry sauce, and then laughing our asses off while watching football later.

ajbkillers: Favorite meal?RealJonStewart: I've gotta go with the classics. Your cheeseburger / fry / milkshake. Your pizza. Your solid steak. Steak and mash. Nice gravy. I'm not the most adventurous of eaters. So keep that aioli shit from me.

unicorn10-10: What's your favorite animal?RealJonStewart: Always been an otter fan, an otter guy. Something about the mischief. And their cute little hands. But when you really study it, and you see that they can actually rip things apart with them, it can take a dark turn.

Sakura_7: Who's your favorite superhero?RealJonStewart: I mean, I don't like to be trite with it, but it's hard to top Superman. To be fair, though, I was always a huge fan of the X-Men series before it got too timetravely for me to figure out what was going on.

On his Crossfire appearance:

Euchre: When you went on Crossfire, did you expect to confound the hosts the way you did? Was it your mission from the start to disrupt their whole theater of debate (and lead to their demise), or just to engage them about the nature of their show?RealJonStewart: It really was not my intent to be disruptive. I truly thought we'd have a goof about how terrible the program is at the top, and move on, but... the combination of their obstinance and my low blood sugar led to no bueno.

SlimandNone: Mr. Stewart, how does Stephen smell?RealJonStewart: Stephen smells like - it's a cross between - Squints into distance... Persimmons and a tattered copy of THE HOBBIT.

MattRyd7: What was going through your mind when Stephen Colbert lost his composure while eating a banana on The Daily Show?RealJonStewart: My greatest joys on the show were trying to make Stephen break, or the other correspondents. Because you felt as though you had accomplished something somewhat Herculean. It's not easy to tickle those folks, but when it happens, you savor it.

On the inner workings of The Daily Show:

NOT_THE_RIGHT_GUY: What do you usually whisper in your guests' ear after concluding the interview?RealJonStewart: I want you to get *get the fuck off my stage. NOW! Actually, it's usually a continuation of something that we were discussing on there, that i wasn't smart enough to get in during the actual televised portion. Or "good job!"

btits: Mr Stewart, if you could go back in time and interview someone from history, who would it be and why?RealJonStewart: Uh... I would say Abraham Lincoln. For the obvious historical importance aspect, as well as the "secret to the confidence of being able to rock the top hat and Amish beard." Respect.

Megantay: Jon, I know that you said Hugh Grant was your least favorite guest you've had on the show. Just curious, have you seen or heard from him since?RealJonStewart: Hehehehehee! Uh, we have not gotten together. Since... that. And I imagine it is not forthcoming.

suaveitguy: Can you describe your personal and professional feelings the day that the Anthony Weiner scandal hit?RealJonStewart: That's a good question. I think I was... sad. For the individual that i knew as a friend. And that colored, you know, the general process of creating the humor. I also think I may have overcompensated by doing more material on it than we might have normally.

elbossohogo: Do you plant to direct again now that you have Rosewater under your belt?RealJonStewart: My hope is - I certainly wouldn't rule it out. My hope is the industry doesn't either. (*And speaking of which - this might be a nice time to say - you know, maybe if you go see the movie...)

tragic-waste-of-skin: What was the joke that made you so angry at Seth McFarlane? I recall you were absolutely livid.RealJonStewart: It wasn't a joke. It was during a very difficult time, during the writer's strike, and he's a guy that i really respect and admire, and i heard he was really disappointed in me for coming back on the air, and so we had a conversation that got heated, but I think hopefully we both ended up with a better understanding of each other's position on it, and have since become friendly.

sosyurface: Can you tell us the secret to your luxurious hair?RealJonStewart: Uh... that is the nicest thing anybody has ever said to a 51 year old victim of male pattern baldness. I think the big secret is never turn around. Face everyone.