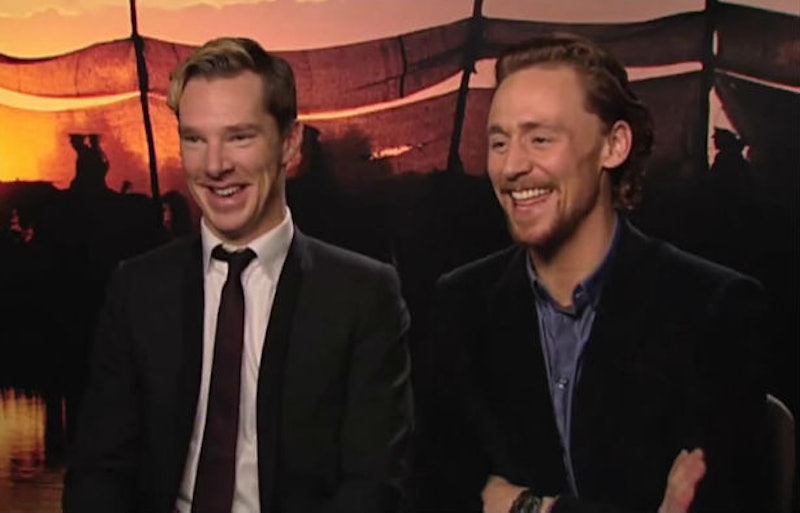 It's probably safe to say that Benedict Cumberbatch and Tom Hiddleston are one of the most beloved and talked about Hollywood bromances. From the two sporting their feminist side to Cumberbatch impersonating Hiddleston to both showing off their fantastic dance skills, these two take their friendship to a new level. As much as I could go on and on about their magnificent qualities (there are a lot), there's a more important question that I think we've all wanted answered for some time now: How did Benedict Cumberbatch and Tom Hiddleston meet?

Their friendship started with a little Steven Spielberg film. In 2010, these two good-looking men with accents capable of making anyone faint starred together in War Horse. Seeing as they both played military characters, you could say these two have always been old Army pals. Now, a little over four years later, Cumberbatch and Hiddleston are still inseparable. OK, not literally, but they do consider one another their very good friend. As Hiddleston told TheStar.com, "He’s one of my best friends. It’s as simple as that." He added, "It’s funny how people have framed us together in a way. He’s just a great, amazing, brilliant actor." Cumberbatch mimicked his pal's response when he told Empire magazine, "He's an action man. He's got the looks. He's an incredibly talented actor, and he's one of the finest of our generation. And a friend." Can you say freaking adorable?

From the moment of their first meeting during the film, these two have included each other in their lives and haven't let the competition of the entertainment biz get in the way of their friendship. Hell, they are even neighbors, at least they were in 2013 (that could have all changed, but let's hope not!), per ET Canada. "Benedict is one of my best friends, we live around the corner from each other in London," Hiddleston revealed. "We met on Spielberg’s War Horse. We spent a summer with Mr. Spielberg and became friends for life."

The rest is history. With that said, let's take a moment to reflect on one of the most amazing friendships (aka Hiddlebatch) we've ever encountered.

They Make a Great Interview Duo

They Have Good Manners

Don't ever stop being friends. Ever.