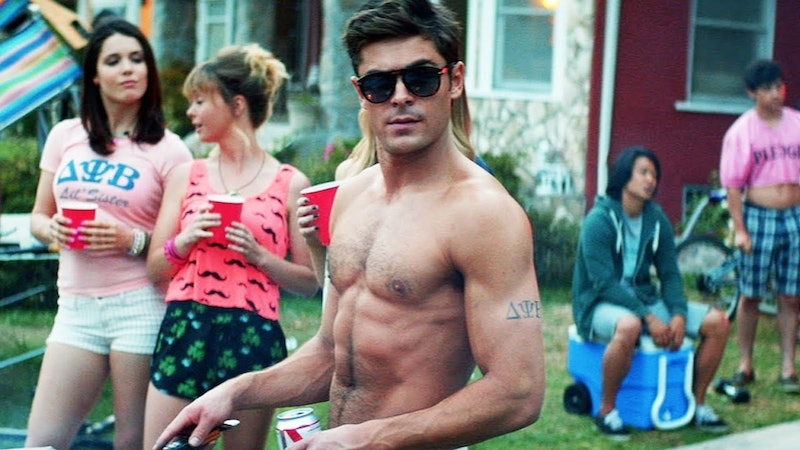 I went to an overwhelmingly bourgie college mostly filled with business and PR majors who were essentially the Stepford Wives of academia. Since it was a small campus, everyone was innately incestuous and by your senior year, there was a good chance you had ended up making the usual dating rounds. And if you did, you almost definitely dated at least one business major. Crisp and clean on the outside, and a raging dude-bro on the inside, male business majors (for the most part) easily lend themselves to be the most annoying human character tropes in college. What is frightening, however, is that these guys, on the surface, appear to be like any other normal college guy. Their ability to seamlessly blend into their surroundings poses a terrible threat to single college students everywhere: Any unsuspecting person can accidentally find themselves dating a business major.

The Business Major Boyfriend is pretty, and possesses scarily Patrick Bateman-esque traits (sans psycho killer tendencies, hopefully). Business major bros are commodity fetishists. They like nice things: nice dranks, nice cars; They will spend over $50 on face wash. During the holiday season, they take their Boyz™ to lush cabins in the mountains, where they exercise their snowboarding prowess and drink IPAs after ordering room service. Business majors are essentially real-life characters of all those ‘80s and ‘90s movies starring Philip Seymour Hoffman in a school-boy outfit and dastardly sneer-smile.

Are you dating a business major? Chances are, if these tell-tale signs will seem way too familiar, you are.

But in class, his professor calls him "Charles," or "Bradley," and he also uses his full names when introducing himself to your parents because he wants to be the most perfect gentleman ever (and he also wants to be taken seriously in The Real World). When it's time to get turnt, though? CHAD/BRAD IS IN DA HOUSE.

2. He owns at least 15 gingham button-up shirts from Express

He always rolls them up to his elbows, like the hardworking #BOSS he is. Except that he probably doesn't have a job yet, and his internship requires only three hours of participation per week (and he's compensated for it with a signature from his boss that he shows his academic advisor). Still, he dresses like owns half of Wall Street. Dress to impress, bb.

3. And if he’s not wearing those, he’s wearing his white or pastel v-neck

It probably set him (or his trust fund, or the credit cards he maxes out to fit in with his trust fund-having friends) back like $40, and yes, he is aware of the subtle tufts of hair that escape the collar and he is proud of his aesthetically artful manliness. He calls his v-necks his "metro" shirts.

4. Your third date was seeing Major Lazor in concert

The boy is obsessed with Major Lazor. He can't get enough of the dubstep-twerking and the light shows, and the fact that he is surrounded by his fellow bro brethren (brotheren?) in the crowd and that they all know when to aggressively fist-pump the air.

5. His favorite bands are Phoenix and Passion Pit

He saw them at Coachella TWICE. This was also where he ~~rolled~~ for the first time and basically experienced the fifth dimension. Spiritually, he was never the same since.

6. He can recite the first Anchorman script by heart

Other favorite movies include The Hangover, Zoolander, Swingers, and basically anything with Vince Vaughn in it. Vince Vaughn is the messiah he prays to every night. In fact, Vince Vaughn is basically his spirit guide who taught him how to be cool around girls and pretend he doesn't actually care about them, as long as he "gets some." He tries to channel his movie boyfriend Vince by saying things like, "that's so money."

7. All of his ex-girlfriends are in a sorority

And they're essentially perfect humans who solely shop at Madewell and Zara. They're all either business, PR, or marketing majors who intern in LA and tan outside their dorms daily, even when it's overcast and 55 degrees out. They're names are usually Ashlee or Kelsey. You're probably irrationally jealous of them.

8. His "let’s get crunk" outfit consist of a loud-colored tank top, cargo shorts, and boat shoes

Sometimes, he'll ironically wear a straw hat or one of the Gilligan's Island floppy beach hats. If he's not wearing his boat shoes, he's sporting original Rainbow sandals. Unsurprisingly, his toes are more groomed than those of any given lady on campus (he secretly gets them professionally buffed every Friday).

Watch him go from chill bro to manic bro in 20 minutes. Zero to 3hunnid, like WHAT.

10. His business fraternity is his beloved coven

On Wednesdays, we wear suits and ties. And talk about excel spreadsheets. And get blasted Thurs-Sun like real McCoys.

Do you have a name? That's too bad, because you are now "babe," or "baby" forever and ever and ever.

12. He's probably all about Movember right now, isn't he?

Admit it: He's grown out a few pathetic whiskers above his mouth for Movember and thinks he's ironically hyper-masculine now. In reality, he just looks like if someone from To Catch a Predator shoplifted all of J. Crew.