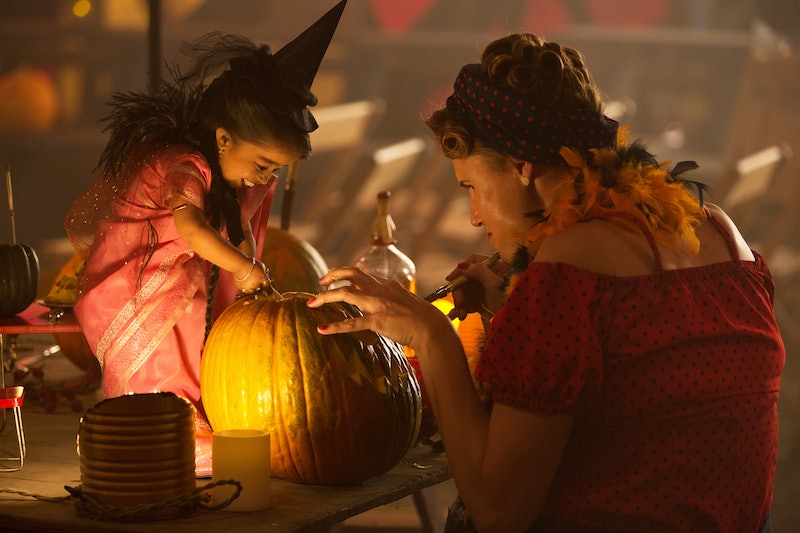 Did anyone have a mini heart attack on Wednesday's episode of American Horror Story: Freak Show? I know I did. The prospect of someone causing harm to the sweet Ma Petite was more than just horrifying — it was downright tragic. Luckily, Ma Petite's murder was nothing but a fantasy sequence — and, like all of the so-called "freaks" in Elsa Mars' freak show, she lived to see another day. And that's a good thing, because Elsa's right hand lady has quite an interesting future ahead — how will she cope with the reveal that Elsa has betrayed her "family" by selling off Bette and Dot to Dandy Mott? Actress Jyoti Amge will certainly have an interesting role to play in the rest of the reason as Ma Petite decides which side of the freak show she should remain loyal to... let's just hope she survives it.

But throughout Freak Show, Ma Petite is carried like a baby and it has me wondering, how old is Ma Petite (and actress Amge)? Amge's role on American Horror Story actually happens to be her first as an actress, but considering she's only 20 years olf, that's a pretty decent step in her budding career. Still, it's a little weird that on and off screen, co-stars continually hold Amge like a small child, considering that in an FX interview, Amge said she "hated" it:

I don’t let everyone pick me up. I only let myself be picked up by whomever I want to be picked up by. I don’t like it if I am being held like a baby … I get mad when someone annoys me by touching my hair, or keeps touching me without permission. Then I get angry.

Perhaps, since it's part of the character and the '50s world in which she lives, Amge is alright with folks holding her like a doll or baby for AHS purposes. After all, Ryan Murphy did seek her out specifically.

She was handpicked by AHS producers due to her small stature, which made her perfect for the role of the world's smallest woman — a record Amge actually holds, according to the Guinness Book of World Records. Amge weighs a mere 11 pounds and stands at 23 inches tall and the reason for her small stature is a type of dwarfism called achondroplasia. According to the Genetics Home Reference website, Amge has a particularly unusual case, that makes her shorter than the average height for women with the genetic disorder, which is approximately four feet. Apparently, her unique stature makes some people forget that fact that she is a woman and not a girl — so her frustration is more than understandable.

Still, being held by the actors on AHS is a big step in Amge's career. The Nagpar, India native also appeared on the Indian version of Big Brother, titled Bigg Boss, in 2012. In 2013, she appeared on Chelsea Handler's talk show, Chelsea Lately. Though AHS is Amge's first time playing a character, she's wanted to be an actress for years. According to the documentary produced by FX, Amge is thrilled to be on American Horror Story: Freak Show, and has stated that acting in Hollywood has been her dream for a long time.

And the good news is, she's already got the fame part of the game set: There is a statue of Amge in the Guinness Worlds Record Museum in Hollywood — something the actress admits to People Magazine was a bit "overwhelming" to see. Let's hope that, much like Amge's statue, Ma Petite will last a long time on AHS. She's one character I'd really hate to see go. (Consider this a warning, death-happy Ryan Murphy.)