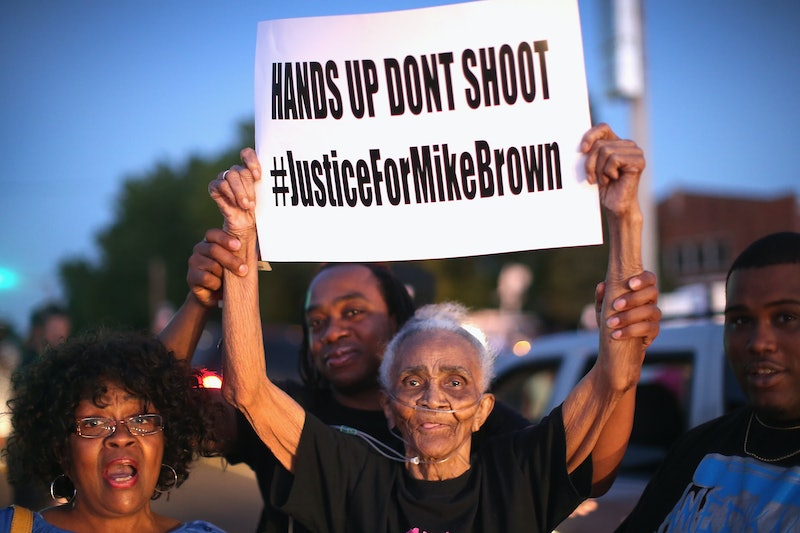 As Missouri prepares itself for the grand jury's decision regarding the fate of Officer Darren Wilson, more details about the shooting that sparked a national debate about police brutality have emerged. Thanks to EMS and police records obtained by the St. Louis Post-Dispatch, we now have a rough timeline of Michael Brown's fatal confrontation with Wilson. According to the report, the whole encounter between Brown and Wilson lasted under two minutes.

It all started at 11:53 a.m., on August 9th, in the now-infamous town of Ferguson, Missouri, when a dispatcher reported a robbery at the market. Less than a minute later, the dispatcher added a description of the suspect: black, male, wearing a white T-shirt, running towards QuikTrip and having stolen a pack of cigars. (This is likely the same robbery that was referenced by the police chief right after the shooting took place.) During this time, Wilson had been tending to another call, but by 12:00, he reported that he was back in service and able to help.

After this, it gets a little messy. At 12:02 p.m., Wilson called for backup, saying: "21. Put me on Canfield with two. And send me another car.” Only 42 seconds later, a call was made to say another officer was about to arrive on the scene. Seconds after this call — at 12:03 p.m — a witness Tweeted: "I JUST SAW SOMEONE DIE OMFG," and by 12:05, a dispatcher was calling for an ambulance (mistakenly reporting a Tasing incident).

Which means that the whole thing — from the moment Wilson saw Brown to the moment that Brown's life ended — was over in a matter of minutes. It means that their struggle lasted a matter of seconds. Let's revisit Wilson's account of the confrontation for a moment, bearing this chronology in mind. As Bustle previously reported:

According to Wilson’s account in the Times’ report, he’d been trying to leave his S.U.V when Brown — 18 years old, and unarmed — pushed him back in. They continued to physically struggle in the car, where Wilson claims Brown pinned him down, and made him “fear for his life.” At one point, the teenager supposedly managed to grab Wilson’s gun, which had been resting in its holster on the cop’s right hip. Wilson told investigators that he’d been severely beaten, too; that Brown had scratched and punched him and left him with major cuts.

At some point during this, Wilson claims to have called in to say “Shots fired, send all cars,” but that his radio was broken. There's no evidence to support this yet, but it's perfectly plausible. Regardless, Brown then ran away from the car, and was fatally shot, seven times.

The timeline doesn't answer the burning questions. It doesn't tell us how Wilson went from spotting Brown and his friend, Dorian Johnson, on the street, to shooting one of them dead. It doesn't tell us who the aggressor was, or whether Brown did in fact have his hands up before he was killed, as many witnesses have said. It doesn't tell us what this month's grand jury verdict is going to be. But it does bring home just how blindingly fast it all occurred — how little time there was thought, or analysis, or even physical struggle.

At 12:07, only seven minutes after Wilson called in to say he was avaiable to help his fellow officers catch the robbers, an officer radioed: “Get us several more units over here. There’s gonna be a problem.” How right he was.

More like this
Where Michael Peterson From 'The Staircase' is Now
By Justice Namaste
The Staircase Explores The Murder Trial That Ripped A Family Apart
By Gretchen Smail
Michigan’s Governor Is “Going To Fight Like Hell” To Protect Abortion Access
By Andrea Zelinski
David Rudolf, Michael Peterson’s Attorney In 'The Staircase,' Is Still Practicing
By Taylor Maple and Morgan Leigh Davies
Get Even More From Bustle — Sign Up For The Newsletter