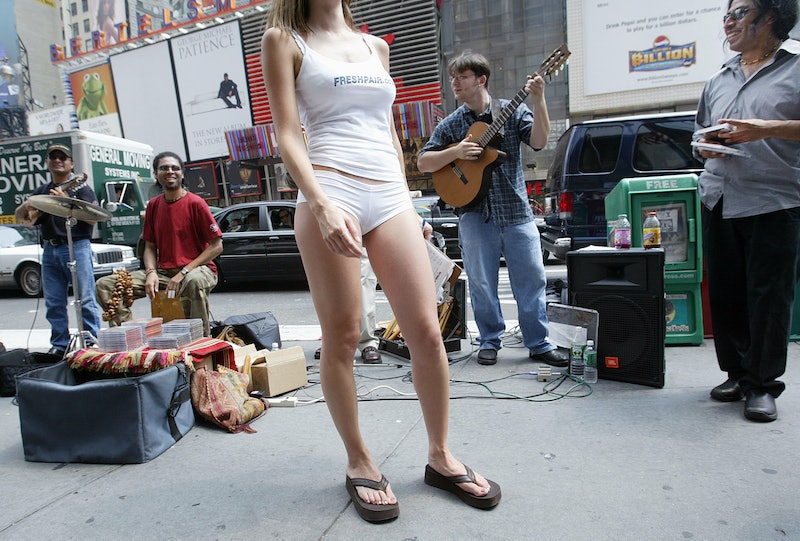 Need a break from watching Kim Kardashian's inevitable journey to #breaktheinternet? Then consider diverting your attention to Leah Jung, a model who walked the streets of New York one day this week without pants. That's right, clad in her fedora, a zip-up sweater and red wedges, she donned a pair of painted-on jeans that didn't even gain a side eye from a Forever 21 sales associate.

The video was created by Model Pranksters, a YouTube channel that posts videos of social experiments. In the video, Jung gets a pair of impressive, distressed jeans painted onto her body by a team of makeup artists from The Body of Art. Then, as if it were any other day, she takes a stroll through the city, with cameras lurking nearby, to see who would know the difference between jeggings and skin (because, seriously, it's hard to decipher sometimes). Throughout the video, Jung walks through Times Square, grabs a bite to eat from McDonald's and rides the subway. To see if she could get a flinch out of someone, she walks inside Forever 21 and asks a sales associate where she could buy the jeans that she was wearing. Even up-close, the associate is fooled, telling Jung that she might be able to find the jeans downstairs. It's not until she is standing at a MetroCard machine that a man notices not her jeans, but her derrière. The man boldly takes out his phone and gets up close to take a photo of Jung's rear end while she is at the machine, getting as many angles as he can before she turns around. Although Jung caught the the man in his act, she didn't react negatively; she merely walked a way laughing and the video ends.

In the last 35 seconds of the video, what started off as a merely a playful social experiment sadly turned sour. Online, all headlines and posts written speaks to the lightheartedness of the experiemnt and how no one reacts to Jung's painted-on jeans. But, what about the one and only reaction that is actually included in the video? Do we write it off as just a random guy ogling over a woman's body? Or does that bit need an explanation and conversation on the various problems encapsulated in just 30 seconds of a three-minute video?

The controversial catcalling video that has dominated the internet for the past few weeks has brought to the forefront the unfortunate experiences women and their bodies endure on a day-to-day basis. And, though the video has been met with its share of rebuttals and mimicry, it is still powerful in the dialogue that it has created. Sure, women have a choice on how to display their bodies, but that choice is not one to take advantage of in order to send a few Snapchats to your closest friends. There is privacy and there is permission, and it's about time we understand the meaning of the two. The ending of this video, perhaps, furthers the discussion on the problem with objectifying women and the fact that you just shouldn't do it.