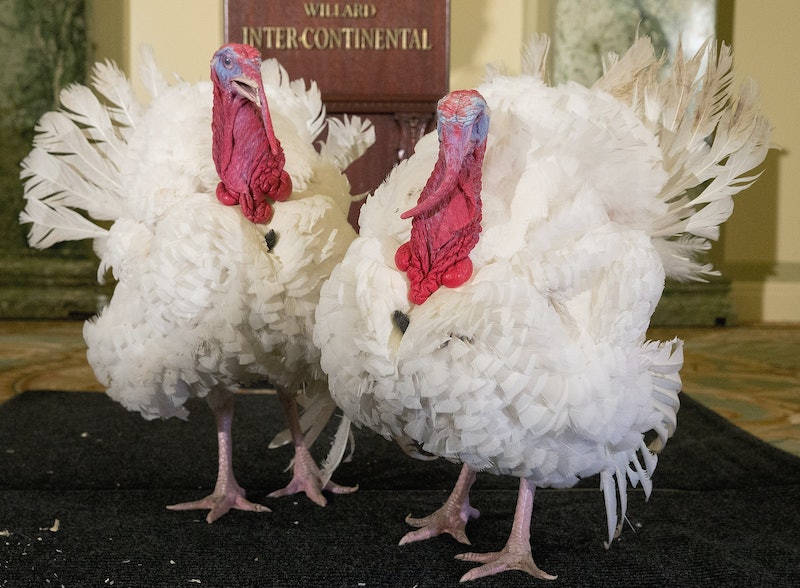 For the love of all things Thanksgiving, here is a video of a female turkey avoiding turkey nookie by dizzying up her suitor and throwing him off balance. The male turkey, who clearly thinks he’s about to get some (HA, you smug fool—you don't even know what's coming!) is caught by surprise when the girl turkey slowly starts walking around him in circles, quickly trapping him in her whirlwind of rejection.

To keep up with her, the desperate bird follows her like a total idiot, ultimately spinning himself out of control. Ugh, men. You’ll notice at 43 seconds that the lady bird is so into her clever scheme that she pauses to emit an elated chirp of victory. You go, lady bird. After she’s sufficiently destroyed him, she walks away. If feathers could talk, hers would be uttering a sharp “as if!” a la Cher Horowitz.

So the next time some creepy, relentless guy at the bar starts to get all up in your personal space and generally create a bad environment for you, don’t put up with his nonsense. Instead, run around him in circles until he starts feeling dizzy and is too weak to carry on with his vexatious ways.

More like this
25 Quotes About Love To Share During Pride Month 2022
By Madeleine Aggeler and Emma Garza
Ask Gen Z: Kate Glavan & The "Fugly Hag Stroll"
By Alexis Morillo
Here’s What Sarah Jessica Parker’s Canned Cosmo *Actually* Tastes Like
By Emma Garza
What Is “Night Luxe?” Breaking Down TikTok’s New Aesthetic
By Courtney Young
Get Even More From Bustle — Sign Up For The Newsletter