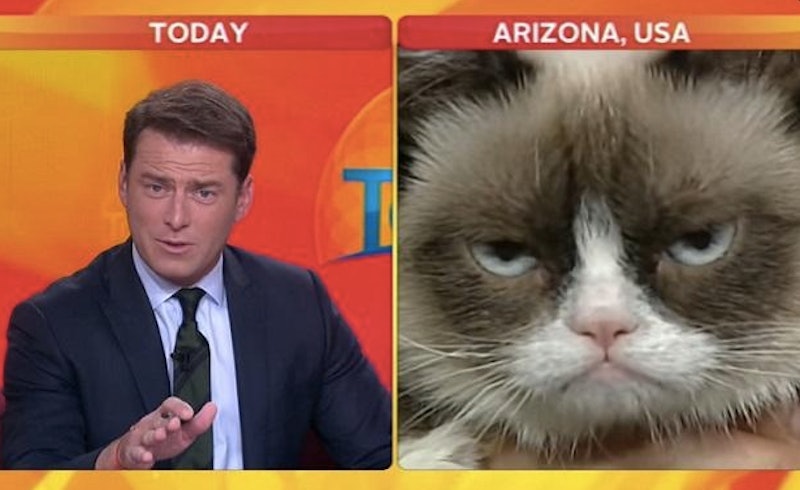 When Australian Today Show host Karl Stefanovic interviewed Grumpy Cat last year, I thought his journalistic career had peaked. I did not believe it possible for him to further esteem himself — after all, once you've given the Barbara Walters treatment to a feline, what more is there for you to do? Happily for women in journalism everywhere, Stefanovic wore the same suit every single day last year to prove me wrong, and more importantly, to demonstrate the double standard that exists for men and women on television. The most surprising, and maybe, disappointing thing? Not a single person has ever commented on his fashion choices, or lack thereof.

It is no secret that women are judged on their physical appearances more harshly and more often than their male colleagues. The best and worst dressed list of any event generally includes far more women than men, and whereas the idea of a woman repeating an outfit is on par with blasphemy, the same fashion faux pax is nearly nonexistent for men. Sure, women have more options — we can wear skirts, pants (yes, tights qualify as pants, thank you), dresses and have a bevy of various tops to choose from. And yes, perhaps men are more limited in their selection, particularly when it comes to more formal, business wear. I mean really, other than that one tan suit, can you ever really tell if President Obama is actually changing his wardrobe?

To put this to the test, Stefanovic decided to see just how observant his viewers really were, and donned the same cheap, blue suit every time he was on the air for a full calendar year. And as it turns out, people really can't tell, or worse yet, they don't really care. Stefanovic's appearance was of little concern to his audience. But his female colleagues were not afforded the same luxury.

Lisa Wilkinson, Stefanovic's co-host on Australia's Today Show, noted in an editorial for the Sydney Morning Herald, that question she received most frequently was not "What are you going to say?" but rather, "What are you going to wear?" She continued, "And when you're a woman doing breakfast TV, you quickly learn the sad truth, that what you wear can sometimes generate a bigger reaction than any political interview you ever do." One viewer named Angela was so affected by Wilkinson's clothing (not the content of the show) that she felt compelled to send the show the following email:

Who the heck is Lisa's stylist? Whoever it is has Lisa in some shocking clothes. Today's outfit is particularly jarring and awful. Just my 2 cents worth. Get Some Style.

Wilkinson, in a rare move, chose to respond to this message, telling Angela that each of the 200 different outfits she wore each year not only had to appear professional and stylish, but also had to be comfortable enough for her to appear for extended times on a set or on location at a specific shoot. And whereas Wilkinson can expect flack for any one of her 200 outfits, her co-host Mr. Stefanovic, noted cat interviewer, received not one single criticism from any viewer, male or female, for his one outfit — that now infamous blue suit.

In an interview with Fairfax media, Stefanovic said of his stealth experiment,

No one has noticed; no one gives a shit. But women, they wear the wrong color and they get pulled up. They say the wrong thing and there's thousands of tweets written about them.

Echoing his colleague, Stefanovic added, "Women are judged much more harshly and keenly for what they do, what they say and what they wear." And this seems to be true for women throughout the broadcast industry. In the United Kingdom, a 2013 study found that of the 481 presenters on major television networks, "only 26 were women over 50." In fact, the BBC reports, "Out of all the over-50s appearing on screen 82% are men...Overall across all major broadcasters women over 50 make up just 5% of on-screen presenters of all ages and both sexes."

In the United States, the problem appears as well, particularly in the world of sports journalism. In 2011, Time Union sports columnist Jennifer Gish penned a story about the Buffalo Bills that her readers deemed incendiary, and woke up to over 800 emails from angry (mostly male) readers. They included messages like, "Maybe you should stay in the kitchen next time," "I am hoping you went to some sort of formal schooling to get the position you have or you have worked your way up from doing a lot of under-the-desk work," and worst of all, "You may want to consider plastic surgery or something, you are one god awful ugly looking female."

On the flip side, women who are deemed attractive by their misogynistic male viewers are objectified to no end, reduced to talking Barbies who are worthwhile journalists not because of their loquaciousness, but because of their looks. In a 2013 episode of "The McNeil and Spiegel Show," a Chicago radio show, the hosts noted that a good female journalist was judged by three criteria — "intelligence, what they brought to the broadcast and looks."

Sarah Spain, a SportsCenter anchor and an ESPNChicago reporter, told the Daily Beast,

You can’t win either way. Either you’re too beautiful and you don’t know what you’re talking about, or you’re too ugly and I don’t want to watch you.

For Stefanovic, this is simply absurd, and his yearlong suit challenge proves a sad point in the world of broadcast journalism in the 21st century, where sexism still runs rampant. Said Stefanovic, "I'm judged on my interviews, my appalling sense of humor – on how I do my job, basically. Whereas women are quite often judged on what they're wearing or how their hair is ... that's [what I wanted to test]."

Society's absolute failure of this test should be a rallying, motivational cry for female journalists across the world — ladies, we're in this industry because we're damn good at it, and no outfit is going to keep us from doing our jobs.