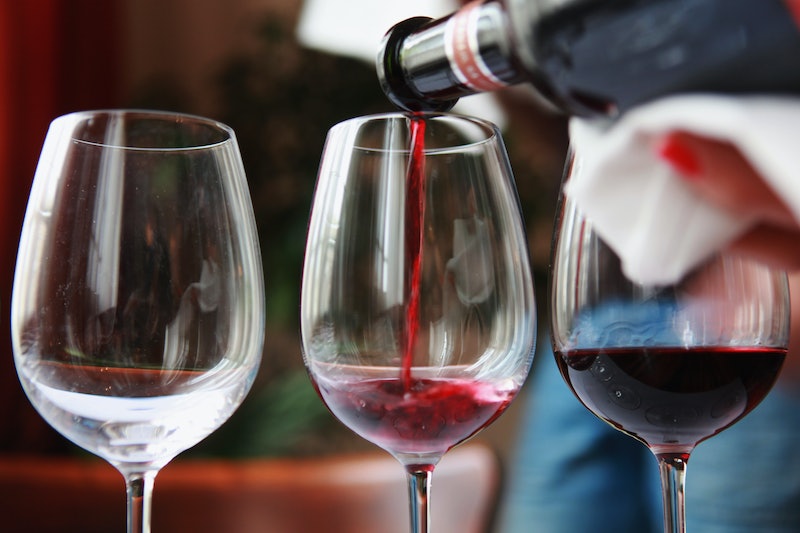 Ever rationalize an evening glass of wine by thinking, “Well, at least it’s heart-healthy?” I know I have, but it turns out that’s not quite how it works. According to a new study, a glass of wine a day isn't necessarily healthy, and it won’t keep the doctor away — unless you have a specific type of genetic makeup.

The study from Sweden’s University of Gothenburg suggests that the cardiac health-boosting benefits of alcohol are only present if you have a particular kind of genotype. Adding to the bad news? Only 15 percent of the population reportedly has it — meaning you probably don’t. According to the study, the genotype alone doesn’t have a “strong protective effort” nor does moderate drinking alone. But the combination of moderate alcohol intake and the specific gene does cause benefit s that can significantly lower the chances of heart disease.

To come to this conclusion, they analyzed the genomes and drinking habits of 618 people with heart disease and a control group of over 2,900 people. Both groups revealed details on how much they drank, what they like to drink, their exercise habits, etc. After a blood analysis of both groups, the researchers found that only people with a certain CEPT gene (which is known for regulating the process of transporting cholesterol to the liver) received the most benefits from moderate amounts of alcohol intake.

How can you tell if you’re one of the lucky few to have this gene? More research on the subject is still needed, but study co-author Professor Dag Thelle suggested it may eventually simply be a matter of genetic testing. Knowing if you have the gene or not could be helpful towards knowing just how much alcohol consumption is healthy for you.

Personally, I tend to take these studies with a grain of salt — one, because there’s a new one seemingly every other week and secondly, because (as they said) more research is needed. In the meantime, one motto always seems to work for alcohol intake and pretty much anything else: everything in moderation.

More like this
An Honest Review Of The TikTok-Famous WalkingPad
By Kaitlyn Wylde
The Case For Tracking Your Heart Rate Instead Of Step Count
By Carolyn Steber
How To Protect Your Digital Privacy If You Need An Abortion Post Roe v. Wade
By Kaitlyn Wylde
If Your Refrigerator Is A Mess, These 25 Organizing Products Can Help
By Courtney Young
Get Even More From Bustle — Sign Up For The Newsletter