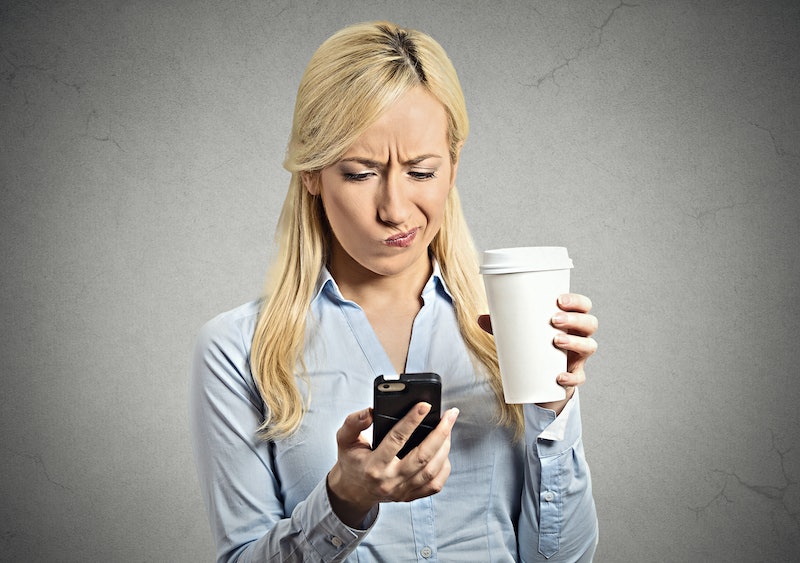 Online dating poses many challenges to the prudent woman: Are my potential dates going to be creepy stalkers? How can I avoid being sent unsolicited nude pics? Will I accidentally be matched with my boss? New app The League uses your LinkedIn info to help you avoid coworkers while dating online, but may turn you into an online dating elitist in the process.

As it turns out, The League's LinkedIn integration isn't its main selling point, it's just a feature that's recently received coverage in the mainstream media. The actual premise of The League is to protect the cream of the online dating crop from having to engage with the riffraff, or even from being shown to them in a Tinder-like format. As we here at Bustle previously pointed out, this approach to online dating is a little elitist, playing to people's sense of superiority (whether it's genuinely warranted or not). Perhaps this has something to do with why The League has pivoted towards emphasizing its coworking-blocking feature...

Should you even want to block your coworkers in the first place, though? Previous dating service "Bang With Professionals" also integrated with LinkedIn but for the opposite purpose — to intentionally connect you with your LinkedIn network for dating (or whatever). Bang With Professionals signed up new users at quite a clip last year, although it's unclear whether the whole thing was just a joke.

Despite the fact that Bang With Professionals was quickly shut down by LinkedIn, dating coworkers is certainly nothing new. Although this number has declined from previous decades, 10 percent of recently-married Americans met their spouse at work. Of the Americans who do attempt office dating, almost 40 percent report having married their coworker consort.

Even if The League's elitism turns you off, it's difficult to deny that people generally like dating people who are like themselves. Skipping The League, with its snobbery and carefully-cultivated dating pool, might make you feel like you're giving lots of types of potential mates "a chance." But in the end, you're very likely to end up with someone like you. Still, I guess there's something to be said for methods that make the process a little less painful in the meantime.