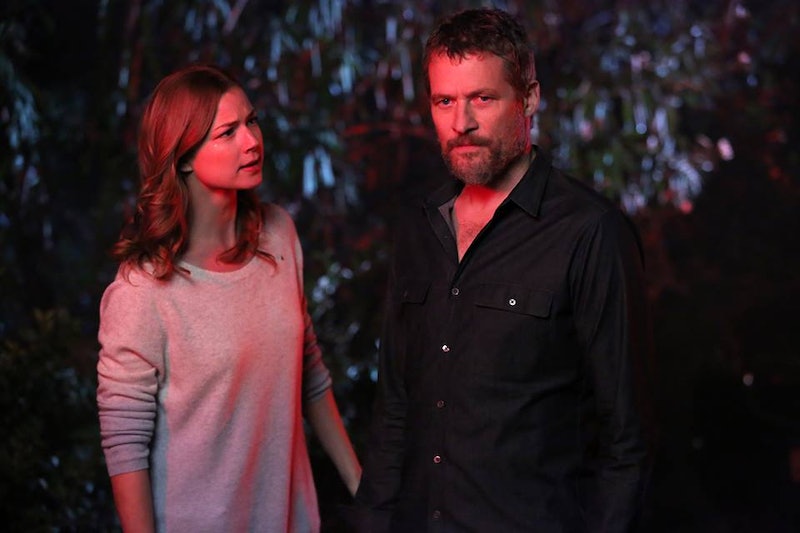 ABC's Revenge has become quite the tough nut to crack, mostly because I feel like I'm watching a completely different show since Season 4 began. Revenge Season 4 has been something else entirely from the series' past three seasons and I like it. I like it a lot. On Sunday night's "Contact," Revenge continued David Clarke and Emily's reunion and, even though they've finally started getting a feel for who the other is, there are so many secrets. Which is something that initially deterred Emily from wanting to pursue this relationship with her father, but, surprisingly, Daniel Grayson has become the devil on Emily's shoulder and convinced her otherwise.

So, Emily's decided to pursue a relationship with her father, which would be really great if David wasn't a wanted man. And by "wanted," I mean wanted dead because Sunday night's episode featured an attempt on his life. OK, it was an attempted abduction, but still — he's obviously wanted by a powerful person who will ultimately kill him. (That's what happens on Revenge, I've been watching long enough to know that.) But, anyway, back to Emily and David and their new "relationship."

David's been kind of a total jerk to his daughter ever since he learned that she was alive in the final moments of last Sunday's episode. I feel like that's just an odd emotion — I mean, he spent his whole life dreaming about seeing his daughter again and now that he has her, he tells her that he can't be her father? SHE DEVOTED HER LIFE TO CLEARING YOUR NAME AND YOU HAVE THE NERVE TO SAY, "I didn't ask for your help," — HOW DARE YOU. I'm sorry, I really feel the feels for Emily. She could've been off having a normal life — hopefully with Aiden — but, because she loved her father, he's dead and she's alone. Cool.

So, David's clearly in the business of pushing Emily away, rather than trying to get close to her right now. Mostly because it seems like the only person he cares about is Victoria, which is so misguided that I don't even know what to do. But, anyway, while he sat by her hospital bed on Sunday night, two men tried to abduct David and Emily saved him. Because that's what daughters are for. And afterwards, they met to discuss their situation and what just happened and, surprise, there are even more secrets to David Clarke's past than we thought.

And he doesn't want Emily to know about any of them. David told Emily at the end of their meeting that it's his turn to protect her. But, to protect her from what? And doesn't he know his daughter could kick some serious butt if necessary? She's no weak link, she's probably got more skills than he does. Either way, there are too many secrets on either side of this father-daughter relationship for Emily and David to even say they have a relationship. And, unless Revenge tackles that drama sooner rather than later, Emily's probably going to torture that would-be kidnapper for a very long time. Ouch.