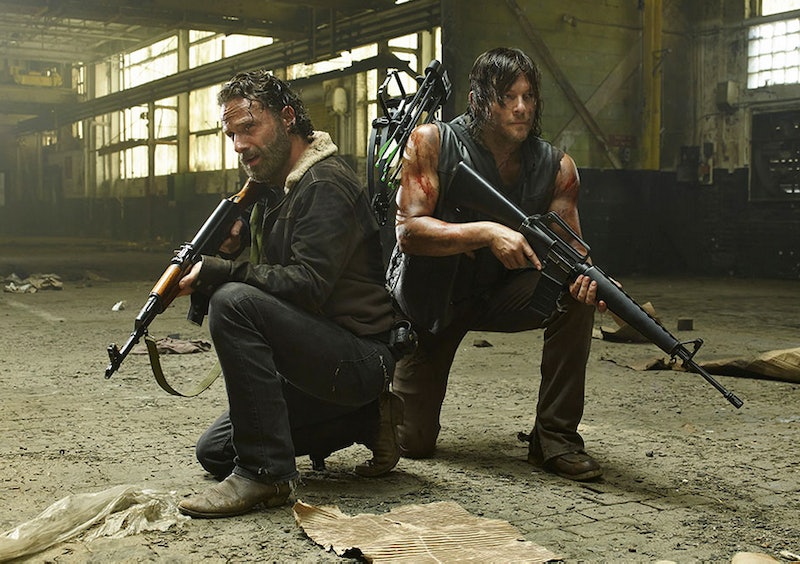 Just when you think you've caught your breath after watching an action-packed episode of The Walking Dead, AMC decides to air a promo for next week's episode that starts the cycle of stress and hyperventilation all over again, and if you saw the scenes for the show's seventh episode, "Crossed," you'll know exactly what I mean. While it doesn't reveal too much, the sneak peek strongly hints that an invasion of Grady Memorial Hospital to rescue Beth and Carol is going down ASAP, among other things. Get ready, Officer Lerner, because Rick, Daryl, and Michonne are about to bring the pain (or, you know, the rescuing).

The brief synopsis AMC provides for "Crossed" says, "Between holding down the church and going on a rescue mission, our group is spread pretty thin. Is this going to be the breaking point?" which basically means two things to me: 1.) I need to get on some anti-anxiety medication as soon as possible, because 2.) the stakes for this rescue mission are higher than ever. After Carol took a pretty major hit in "Consumed" thanks to the reckless driving of some Grady Memorial a-holes, the group now has to rescue not one person, but two.

There are only two episodes left of TWD in 2014, which may or may not mean a mid-season break (#killme), so the battle at the hospital could go down in the eighth episode instead. Still, the action is definitely heating up. Throughout the promo for "Crossed" (which I'm assuming is a direct reference to the infamous crosses on the back of the hospital's vehicles) we hear Carl chastising Father Gabriel for not knowing how to defend himself, and lecturing that "you can't stay in one place too long," which is some not-so-subtle foreshadowing that the group will leave the church in search of more fun-filled zombie adventures elsewhere.

The sneak peek at next week shows Rick, Tyreese, Noah, Sasha, and Daryl plotting to rescue Beth and Carol, which will leave Carl, Judith, and Father Gabriel to hold down the church for the time being.

Any doubts that they're making moves on the hospital next week are also put to rest thanks to the shot of the group that clearly shows they've left the safety of the woods for the urban area where the hospital is in Atlanta.

*cue Rick ominously saying, "They're not expecting us."*

It wouldn't be Walking Dead if the audience wasn't always at least a little bit in the dark, but one thing is for certain: the showdown at the hospital is going to be epic. Watch the full promo for next week below, keep your fingers crossed for Beth and Carol, and maybe grab a paper bag to breathe into just to be safe?