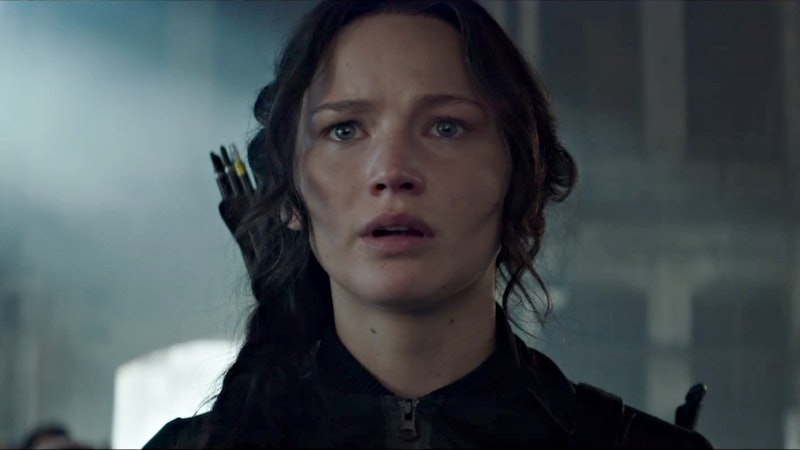 After Katniss won the first Hunger Games, she is tended to by the Capitol's fanciest doctors who erase any sign of her wounds sustained in the arena. But Katniss is pretty badly injured at the start of Mockingjay thanks to all hell breaking loose at the end of Catching Fire. As nice as it would have been to end her second arena trip with another full body polish, the District 13 medical professionals don't care as much about looks. So Katniss is treated by no-nonsense doctors who don't have the time, nor the tools, to make her perfectly new again.

At the end of Catching Fire, in addition to getting electrocuted, Katniss suffers a myriad of other injuries at the hands of Johanna Mason. She clubbed Katniss in the head with a metal spool of wire to keep her out of sight. (Johanna was smart enough to know Katniss wouldn't listen if she had explained that she needed to stay put, so she gave her no choice.) Then Johanna slices open her arm to remove her tracking device. This is all very important to keeping Katniss alive and allowing her rescue from the arena. Johanna pays for her troubles by being captured herself and tortured within an inch of her life.

But Katniss doesn't get of scot free. She walks into the third book pretty banged up, and the injuries play a big role.

Being hit in the head really messed with Katniss' brain. She explains in the beginning of Mockingjay that even after a substantial amount of time has passed, she still experiences disorientation. "The memories swirl as I try to sort out what is true and what is false," Katniss says on page one. "The effects of the concussion [Johanna] gave me haven't completely subsided and my thoughts still have a tendency to jumble together."

Sometimes the only way Katniss can pull her thoughts together is by repeating a list of facts she knows to be true over and over again.

The list begins to roll in my head... My name is Katniss Everdeen. I am 17 years old. My home is District 12. I was in the Hunger Games. I escaped. The Capitol hates me. Peeta was taken prisoner. He is thought to be dead. Most likely he is dead. It is probably best if he is dead.

It's immediately evident that the damage is extensive considering this list is so basic, and yet still a source of confusion for her at times.

HER HEAD STILL PAINS HER

In addition to the mental problems that arose out of her injury, Katniss is frequently plagued with stabbing pains in the spot where she was hit. She has to take medicine to manage the pain that often gives her hallucinations like "the night the floor of [her] hospital room transformed into a carpet of writhing snakes." Yikes.

SHE HAS A PRETTY BAD ARM INJURY

Although the District 13 doctors patch up her wounded arm after Johanna slices it, they don't do so very carefully. "None of the medical team was focusing on looks when they patched up the gaping hole," Katniss explains. "Now I have a lumpy, jagged scar that ripples out over a space the size of an apple."

That's a pretty intense war wound and not without its own pain, I would imagine.

AND SHE HAS A BROKEN HEART

Don't discount the pain Katniss feels over being separated from Peeta. Not only is he not with her, but for a long time she doesn't even know if he's still alive. Even after she learns he is, she discovers that he's being tortured daily and everything Katniss does only makes that worse. President Snow was trying to break her by keeping Peeta hostage and hijacking his brain, and he very nearly succeeds.

Even though Katniss begins Mockingjay with a slew of injuries, she's remarkably resilient. She's determined to get off the medication that's making her brain fuzzy, she wants to battle, and ultimately she wants to save Peeta and protect her family.

She's not going to let a brain injury affect any of that, and that's why Katniss is the perfect Mockingjay. Katniss describes the power of her namesake bird in Catching Fire saying, "The mockingjay is a creature the Capitol never intended to exist ... They hadn't anticipated its will to live." And that sums Katniss up better than anything else. She's resilient no matter what hand she's been dealt, or how many injuries she has. Her will to live and determination outweighs everything else.