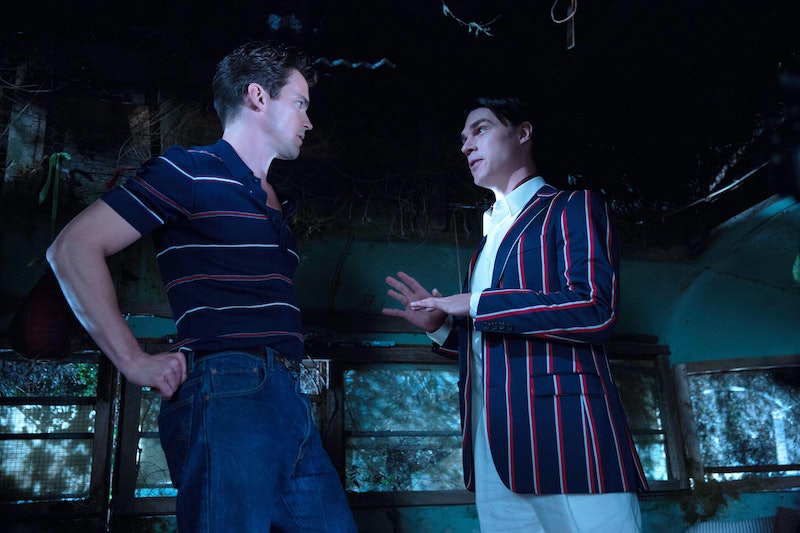 Isn't it just the worst when one of your favorite actors pops up on one of your favorite TV shows, and you get all excited about their character, only to meet the business end of a serial killer's knife inside an abandoned school bus mere minutes later? This is exactly what happened to Matt Bomer (White Collar) on Season 4 of FX's American Horror Story. Bomer showed up on AHS: Freak Show as Andy, a hustler who was sleeping with Michael Chiklis's closeted strongman Dell Toledo and immediately captured viewers' hearts with his steely blue eyes and soulful gaze. Too bad that Andy also captured the attention of one homicidal manchild by the name of Dandy Mott, since the hustler ended up dead on the floor of Twisty's dingy hideout by the end of the episode. But what did Dandy do with the body? Could Matt Bomer come back to AHS: Freak Show ?

Well, he's dead... Or at least that's what the show wants us to think. But since I have a hard time letting go of the fact that Bomer's role amounted to little more than a redshirt on Star Trek, I'm holding out hope that Andy will make an unexpected return later this season. I know, I know — it's unlikely. But hey, a man can dream, right? Supposedly, the reason why Bomer could only sign on to Freak Show for such a limited engagement was because of his shooting schedule for Magic Mike XXL . But what if that explanation was just a ploy so that we would be surprised when Andy pops back up in a couple of episodes?

"But Jefferson," you're probably thinking. "We saw Dandy go full-Heisenberg and dissolve Andy's body in a bathtub full of acid!" Well, yes and no. We saw Dandy dispose of one arm and begin to saw off the second, all while narrating that, "Rule number one of a good killer: make sure all the evidence is gone — start with the limbs." But the last we saw of Andy, he was actually still alive. He had survived two rounds of stabbing and one round of limb-sawing, much to Dandy's surprise and chagrin. ("How can you still be alive? You're making me feel bad!" we saw the killer whine.) We never technically witnessed Andy expire. Maybe Dandy felt so bad that he actually left the job unfinished.

The real reason I suspect that Andy may appear again on Freak Show is because of what showrunner Ryan Murphy had to say about Bomer's character when the actor (who he's previously worked with on Glee, The New Normal, and The Normal Heart) was first cast. "I sent him a text that said, ‘First right of refusal, here’s the role.’ It’s very… warped," claimed Murphy in an EW interview. And while what happened to Andy was sort of warped, I guess (although fairly tame in the gonzo world of AHS, to be honest), the role itself wasn't warped at all. I supposed Murphy could have just been overhyping Bomer's appearance, but I prefer to think that what the showrunner is hiding is the fact that we will soon witness Andy stumble into downtown Jupiter begging for help... armless, but very much alive. Reducing one of People 's Sexiest Men Alive to a bloody walking torso? Now that would be warped.