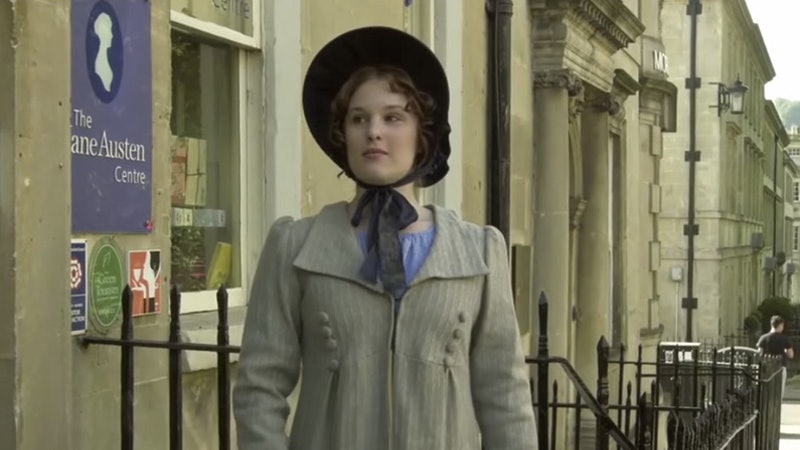 What would happen if Jane Austen were given the chance to go hang out in the 21st century for a day? Well, thanks to a video in which a Jane Austen statue comes to life and explores modern day Bath, we might have some idea. Now if only we could also meet her...

The video "Jane's Day Out," which was made by the Jane Austen Center in Bath, features Lauren Thompson as Austen and Martin Salter (one of the center's greeters) as the man who brings her to life to once again roam British streets. Though Jane Austen lived in Bath for a few years while she was still alive and mentions the city at least once in all six of her novels, I'd imagine that it's changed quite a bit since the early 19th century. Still, our re-animated Austen seems right at home in the city, giving coins to street performers and frolicking amongst the buildings with her parasol.

Of course, she also draws plenty of stares for her unusual attire and clearly has no idea what taking a picture is all about. But she is all over the whole swing set thing.

The real mystery is why she voluntarily goes back to be a statue at the end instead of writing us some more novels. Why?

More like this
The 20 Best Audiobooks To Fall Asleep To
By Aoife Hanna and K.W. Colyard
A 'Bridgerton' Star Just Dropped A Major Hint About Joining The Live-Action Barbie Cast
By Bustle UK
Akwaeke Emezi’s Romance Is *The* Book Of Hot Girl Summer
By Shahed Ezaydi
10 Must-Read New Books Out This Week
By K.W. Colyard
Get Even More From Bustle — Sign Up For The Newsletter