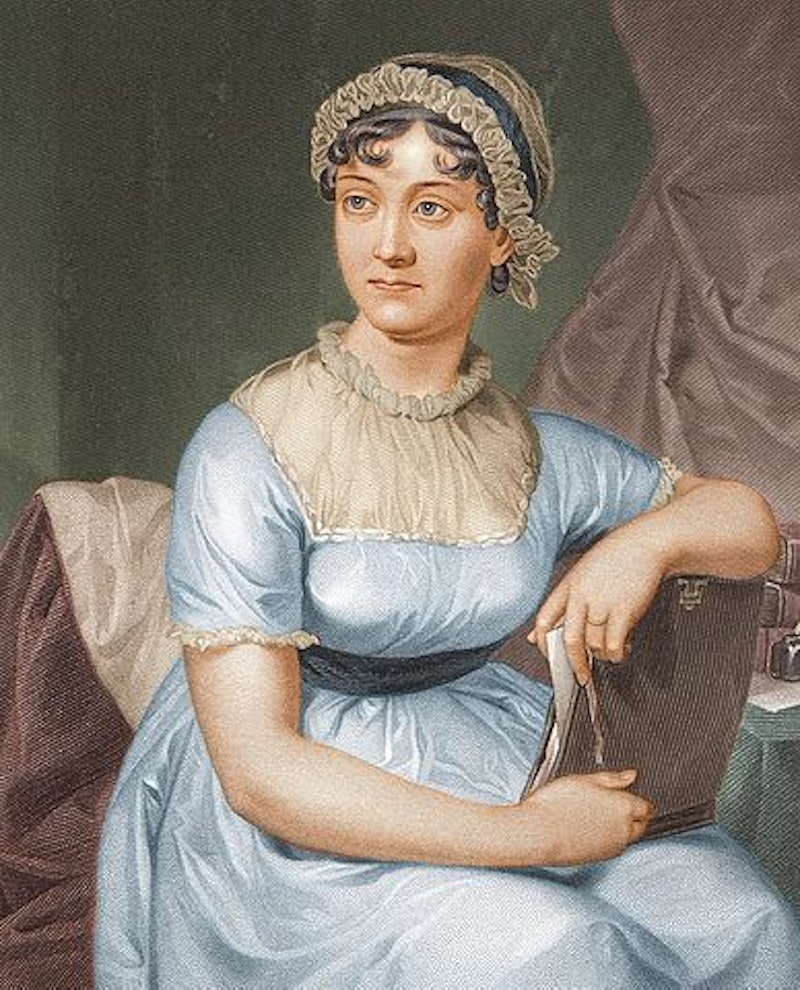 Happy Birthday, Jane Austen! That's right folks, 238 years ago, everyone's favorite literary wit was born. She went on to write six novels, which continue to be read (and re-read and re-read) to this day. Because sometimes a girl just really needs some Pride and Prejudice Mr. Darcy to cheer her up. Jane Austen knew how to craft a character and how to be delightfully snarky about all things society-related. Half the reason we still read her is because her observations of human nature were so on point they still feel relevant today. But what if Jane Austen hadn't been born in 1775? What if she'd been born in the modern times and applied her talented pen to picking apart the idiosyncrasies of the 21st century?

Well, that would have been awesome. Just think about it: the ultimate literary expert at picking apart pretension now taking on hipsters. The social critic who expertly took down overspending in Persuasion looking at the debt crisis. The woman who hated marriage for marriage's sake voicing her thoughts on the "have it all" paradox. The person who deliberately created an unremarkable heroine for Northanger Abbey analyzing celebrity culture. Or, you know, being a guest on The Daily Show .

What would Jane Austen have to say about all that? I mean, I can make some guesses, but what I'd love more than anything would be to hear her say it with her trademark style that seems so polite you don't realize until later that she just completely eviscerated one of her side characters and possibly an entire social institution to boot. Just imagine what she could do with Miley Cyrus.

Of course, if Jane Austen had lived today, she would also be squarely part of the 1 percent — which sounds so much less classy that "landed gentry" but essentially amounts to the same thing. But then again, being wealthy didn't stop her from being a social critic in the 19th century. Hopefully it wouldn't in the 21st either. It would mean a lot of her commentary would be about the world of the elite, but that also sounds pretty awesome. I mean, I'd read a Jane Austen character based off Warren Buffet in a heartbeat.

Yes, having Jane Austen in our time would be wonderful, but the truth is that if she were writing today, she almost certainly would be relegated to the "chick lit" category that everyone loves to mock so much. I mean, a wealthy woman who wanted to write love stories and thought she was up to handling social commentary? Publishers would have slapped a bodice-ripper cover on the modern version of Sense and Sensibility and stuck it on the romance shelf where it would, I'm sure, have gained a dedicated female fan base and devoted online followers, but never would have been allowed near the literary fiction shelf. Unless maybe Oprah discovered her or something.

Still, on the off chance you did discover Jane Austen in the modern day, I'm betting her Twitter account would have been epic.

So Happy Birthday, Jane Austen. We might wish you'd been around to make sense of the 21st century, but we're also pretty happy you were born at all. The world would be a poorer place without Elizabeth Bennet and that's a fact.