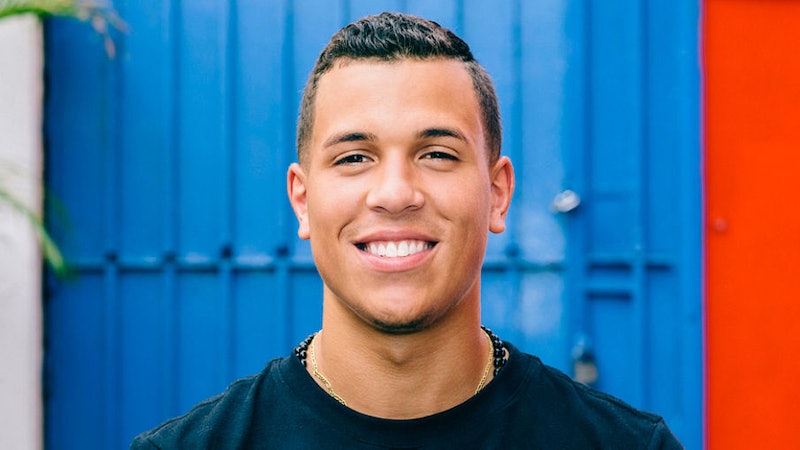 Let's be honest. Even the best of us have a reality show we love, or at least love to hate. MTV's Are You The One? falls squarely in both camps for many people and after investigating the series and the contestants for the current Season 2, I totally understand why it's so entertaining. How on Earth can you not want to watch people try and figure out their perfect matches by making on each other, causing a boatload of drama and playing insane games that really have nothing to do with compatibility but are really only created to see men and women in their underwear? With Are You The One? firmly into Season 2, we've still yet to learn about some of its most interesting real-life men and women, including aspiring athlete, Dominican American, and twin Dario Medrano, who is currently still searching for his perfect match on the series and has even entered a small love triangle with Shelby and Nathan. But what do we know about Dario Medrano so far?

Aside from his MTV profile which states that the contestant is an aspiring professional baseball player and is hoping to get out of the shadow of his twin brother, Are You The One? really hasn't told us much about Medrano other than the reveal that he has cheated on a past girlfriend. The fact that he was willing to reveal this information on live TV to the girl contestants' family members no less, is actually quite a brave thing to do so at this point, I gotta say that the guy actually doesn't lose too many brownie points for his immoral affair. But what else is there to know about Medrano?

1. He Says He's Genuinely On The Show For Love

According to an interview with Latina.com, Medrano revealed that he's auditioned for Are You The One with one goal: Finding love. But I'm guessing he'll still take some money if it's just going to be thrown at him. "I was always looking [for love] in all the wrong places… So, I figured I'd give it a shot with the show. Why not go with a scientific way of falling in love? I saw a little of the first season, and I saw that it worked. What better way to do it than on national TV?" Medrano said.

2. His Mom Is Supportive Of His TV Dreams

Despite auditioning with the singular goal of finding love, Medrano also said in the same interview that he's always wanted to be on TV and surprisingly enough, his mother was totally of his ambition to become a reality TV star.

3. His Twin Brother Also Auditioned For The Show

"Twin Brother also auditioned for the show: Well, my twin brother was supposed to get on the show, ironically. They were going to cast both of us. I thought it would've been a cool twist, for sure," Medrano said in his interview with Latina. In the end, the show went with just Dario and not his brother (despite Medrano's statements being accurate, it would have been a cool twist). But apparently his brother's not too terribly depressed by the rejection according to Medrano. "I mean, he looks exactly like me, so it's not like he's not reaping benefits, you know." How sweet.

4. He Has Some Criteria For His Dream Woman

When asked by Boston Magazine what his biggest deal breaker in dating would be Medrano said being boring was a huge turn-off, surprise surprise. "If you’re uninteresting and if you can’t hold a convo, see ya later. If you have bad breath, you can be beautiful and it [will still be] a turn-off. Hygiene too," Medrano said. He also prefers confident women with large derrieres and his dream woman is Kim Kardashian, but from the year 2004 apparently.

So who is Medrano's match on the show? At the moment it could literally be any of the girls so all we can do is watch and enjoy the drama that comes with 21 strangers hoping to find true love and lots of money.