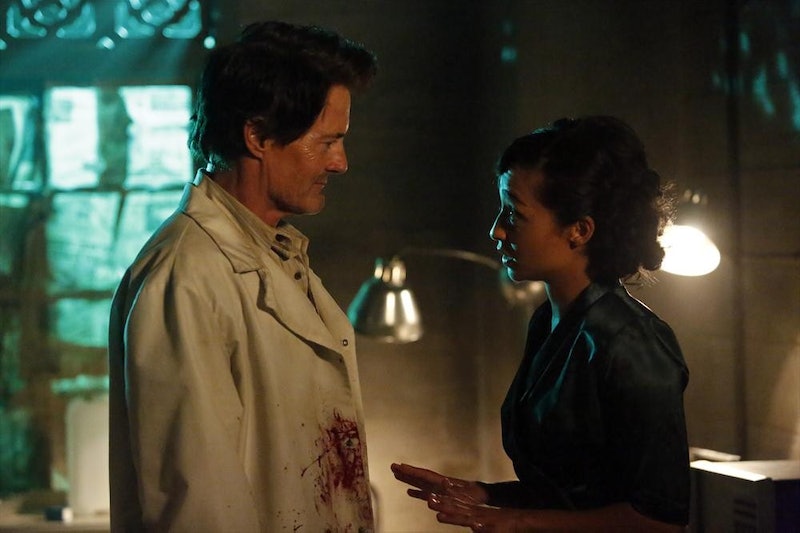 Tuesday's episodes of Marvel's Agents of S.H.I.E.L.D. brings the return of someone who's been absent for a few weeks: Skye's mysterious possible monster/maybe doctor/all around scary father. Actually, we know he's a doctor, because that's how he's credited across the board for the role — simply, "The Doctor." We still don't know what kind of medicine he practices, or if that's even his thing. We also don't know his greater intentions for the Diviner, or Skye. Heck, the more we seem to learn about this guy, the less we actually know. What we do know is that The Doctor has the Diviner and he plans to use it for.... something. Last episode saw him enter the office of Hydra official Daniel Whitehall with a proposition, which leaves me wondering, could The Doctor have been Hydra himself at one point in time?

Do any of us know how Hydra works? Eh, not really. They're so good at not showing their inner workings that they managed to infiltrate S.H.I.E.L.D. and literally no one noticed. What we do know about them is that if you cut off one of their heads, another one grows. The Hydra hierarchy is still shrouded in mystery, and it is something we'll probably never learn (at least, probably not on TV). That being said, everything we know about The Doctor's past seems to stack up that he was once at least affiliated with Hydra, if not a full-blown member himself.

That "murderous" rampage that Skye's parents (supposedly) went on all those years ago to reclaim her left causalities of Hydra agents. Why was the Chinese village filled with Hydra agents, anyway? Unless, it was a secret not-yet-discussed Hydra compound. There's no way that The Doctor was ever a part of S.H.I.E.L.D., because then everyone would know about him — at least through whispers behind Skye's back. And after that kind of murderous rampage, I'm doubtful S.H.I.E.L.D. would ever let him see the light of day — just think about Ward and his tiny little barren cell. This is more of a process of elimination: if he's not S.H.I.E.L.D., he has to be Hydra, or, at least on friendly terms with Hydra (however Hydra does friendly terms).

For The Doctor to just waltz into Whitehall's office makes it seem like he does that type of thing all the time. Considering that Whitehall has that cool never-aging thing going on, he's probably run into The Doctor on a few occasions, whether he was out doing evil things or at the Hydra company picnic. The Doctor could have at one point been high ranking in the organization, but, for reasons we don't know yet — or simply haven't pieced together yet — he was cut out, just like one of their heads, and another one grew, leaving The Doctor an evil head somewhere out there in the world.

Hydra doesn't seem like the kind of organization to outright eliminate one of its Hydra heads, because think of all the evil that could still happen. Plus, Grant seems to know about The Doctor, which makes me think The Doctor might be covered in a Hydra history lesson.

Skye already thinks her father is connected to everything — from The Diviner, to the Worlds of Creation, to Hydra — so having him actually be a part of it would make perfect sense. He's clearly not a card-carrying member of this evil league of evil right now, but it seems likely that he was at one point.

Regardless, right now he's brought the Diviner to the Hydra party, and things are about to get a little more interesting for everyone.