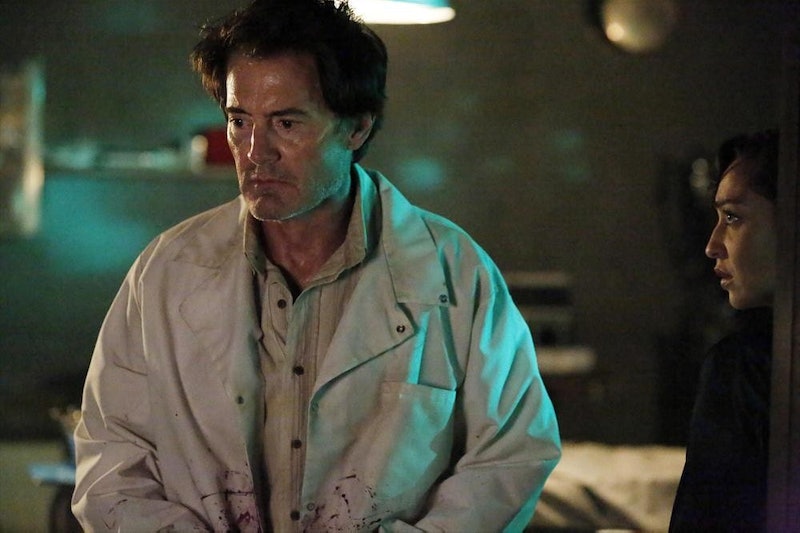 Last week on Marvel's Agents of S.H.I.E.L.D., potential alien Skye got a rude awakening about her father. She burst into his temporary workspace and saw the remnants of two "patients" slashed on the floor. Turns out, she didn't even know the half of it! Doctor Dad later walked the Obelisk/Diviner right up to Hydra HQ and proposed a vow with Daniel Whitehall to kill Director Coulson. Lovely. So it's clear that on Agents of S.H.I.E.L.D., Skye's dad is a bad guy. But who is he? A character that grandiose must have a comic book origin, right? Even John Garrett was a variation on a Marvel character by the same name. Since we don't know the mysterious Doctor's actual name yet, I have to get creative. I mentioned last week that the doc's obsession with mirrors, lighting half of his face, and "losing control" was giving me a real Dr. Jekyll and Mr. Hyde vibe. As it turns out, there is a character who goes by "Hyde" in Marvel history. His name is Dr. Calvin Zabo, and when Screenrant brought this now popular theory to my attention, I decided to explore it even further.

Dr. Zabo is a scientist who, thanks to chemistry, can turn himself into a rage monster not unlike the Hulk. However, he is a thief and a villain who has gone up against almost every recognizable Marvel character. I'm not joking. Not only has this dude fought Thor (and kidnapped Jane Foster — which apparently happens often) and Captain America, but he's also gone up against Spider-Man, Daredevil, and Luke Cage. He hangs out with Norman Osborn (aka Green Goblin) a lot, because of course he does. He took on the name Hyde as an homage to his favorite literary character, however doesn't want to be Hyde all the time, because the brute strength dulls his intelligence. Turns out you can't have it all.

So here's my theory to spin off of what we've already uncovered. What if the Hyde Formula, which created the "monster" Zabo becomes, was an early iteration of the GH-325 drug? If Skye's Dad is Dr. Calvin Zabo, what if he was part of the original Project T.A.H.I.T.I. team that Coulson so objected to? The overconfident, mad scientist who breaks away from the team and experiments on himself is practically a tale as old as time.

If you remember, the Project that ultimately saved Coulson's life was instated in order to save an Avenger, but was deemed too dangerous for anyone else. Now, I know it is believed that this project was initiated somewhere around 2010, a bit after the time of Nick Fury's Avengers Initiative that started with the character/movie Iron Man. However, Steve Rogers became Captain America well before Tony was a twinkle in Howard Stark's eye. Since we're delving into S.H.I.E.L.D. history this year, it's possible that this project existed in some form years ago.

In the Family Way

Dr. Zabo has a daughter named Daisy Johnson. Daisy becomes a superhero named Quake who goes on to both join the Avengers and run S.H.I.E.L.D. as Director. She was given up for adoption and grew up under a different name until she was taken in by S.H.I.E.L.D. agents. This sounds a lot like Skye, doesn't it? The only thing that doesn't fit are her powers. Daisy has seismic abilities. She can make things go boom, or create earthquakes (hence the name). This has little to do with what we know of Skye so far. She's a hacker. She's good with computers and most likely has alien DNA. While it's cool for her to just be superpowered and independently gifted in computer science, I would sort of prefer the two to be connected. However, Skye's dad can still by Mr. Hyde without this all having to add up perfectly.

Personally, I'm going to be over here in my little corner, hoping that somehow Raina is meant to be Daisy Johnson instead. Maybe she and Skye are cousins, or something. It goes against everything I've learned, but why give all the flower symbolism to Raina just to name a different character Daisy?

This is a pretty solid theory that fans have gathered, y'all. I'd get used to to the possibility if I were you, especially since it's going to take a while to hear the difference between "Hyde" and "Hydra" every week.