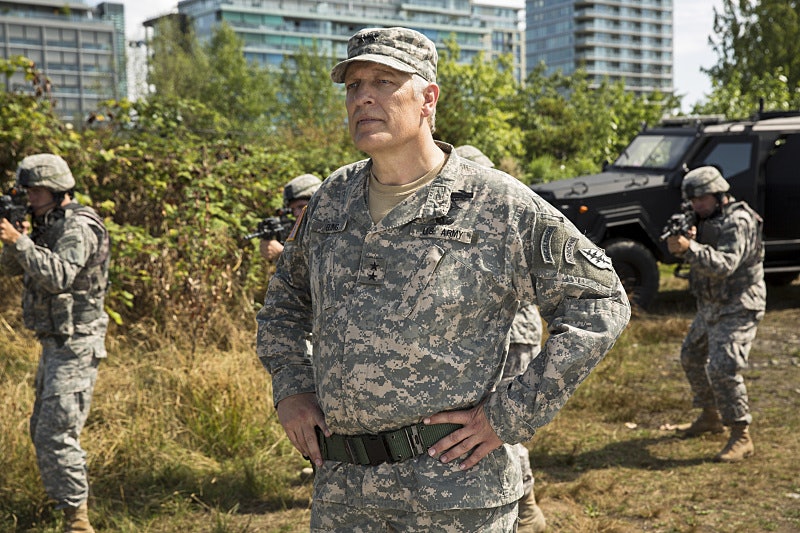 The Flash has been adding scores of familiar DC Comics heroes and villains in its first season. Some of them aren't even human! In the last scene of the show, also known as "The Harrison Wells Diabolical Minute of Mystery," we got an up close look at The Flash's version of Gorilla Grodd. We don't know much about the ape yet, but in the comics, he has superpowers of his own and is one of Barry Allen's most formidable foes. (Were humans not the only primates that got made "meta" by Harrison Wells and company?)

We learned that Grodd is part of a project that Wells and General Eiling, played by Clancy Brown, were working on together in the past to create a kind of super soldier. (Of course. It's always super soldiers. We can't have anything nice or interesting in stories without the fictional Government trying to militarize it.)

Wells disagreed with the cruel way they were treating their "subject," which turned out to be Grodd, and he and Eiling were over. Done! Wells then whispered to the ape that he had other plans in mind for him. Again, of course! This is Harrison Wells' world. We're just living in it, and occasionally dying in it. Interestingly enough, Eiling almost ends up dead before the episode's finish. How many former colleagues does Wells plan to off as he completes his grand scheme? And more importantly, what's the deal with Gorilla Grodd on The Flash?

In the comics, Gorilla Grodd hails from Gorilla City, a secluded area for hyper-intelligent apes. Gorilla Grodd was gifted amongst his peers, with the powers of telepathy and telekinesis. He's also great at statistics? Sure, why not. The gorillas got their abilities from a space rock, not a laboratory. Grodd wanted to turn Earth into the Planet of the Apes and overthrew Gorilla City as his first step towards world domination. When he arrived in Central City, he charmed the residents and even ran for Mayor. As you do.

He is an apt match for The Flash due to his symbolic connection to evolution and genetics. Barry can't produce lightning or snow. He's just really fast, putting him at the top of his species just like Grodd.

No Friends for Barry Allen

On the show, Grodd was kept in captivity and seemed friendly towards Harrison Wells. It's the in house treatment that we've seen for so many new origins on The Flash. This is supporting the theory that Harrison Wells created the super-powered individuals on purpose. Was Gorilla Grodd given additional powers in the same storm that granted everyone else their gifts? Or were they all, more likely, the result of the experimenting. That's so sad! Don't test products on animals, especially the ones used to create super soldiers!

I don't think the fact that this character was absolutely made this way by Wells is going to sit well with Barry. Or Cisco and Caitlin, for that matter. All three of them are gifted scientists who, as far as we know, have a heart. Perhaps Grodd is the start of their eventual falling out at Team S.T.A.R. Labs.